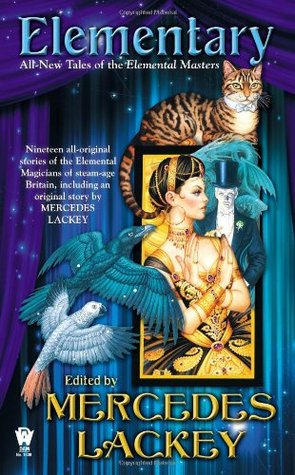 Goodreads
Also in this series: The Case of the Spellbound Child, The Serpent's Shadow, The Gates of Sleep, Phoenix and Ashes, The Wizard of London, The Silver Bullets of Annie Oakley

The novels in the Elemental Masters series are loosely based on classic fairy tales, and take place in a fantasy version of turn-of-the-century London, where magic is real and Elemental Masters control the powers of Fire, Water, Air, and Earth.

Now the voices of other authors join Mercedes Lackey to add their own special touches to this delightful alternate history, in a world where magic is always just around the corner

An anthology of 19 stories revolving around the Elemental Masters urban fantasy series set in Victorian England.

Samuel Conway‘s “Fire-Water” is something of a parable with a dose of Solomon’s judgment and a splash of tequila. It’s a unique interpretation as well as a cute description of how prey detects a predator: “the sun winks”.

Diana L. Paxson‘s “Fire Song” blends ancient history with magic as a philosopher’s family flees the overthrow of his patron. Nice peek into the personal fears of a mother with the very real fears of pursuit and murder.

Kristin Schwengel‘s “Sails of the Armada” is a very sad attempt to “explain” how the Spanish Armada truly met its doom. It does take on a very personal perspective with the kidnapped Rodrigo’s perspective and his friend, a sea serpent. Rodrigo raises an interesting question as he wonders if one is only a heretic if one is an enemy.

Fiona Patton‘s “The Wild Rogue” finds a wild, bad-tempered Water mage drinking his demons away. It’s got plenty of twists and turns — enough to get me very confused.

Elizabeth A. Vaughan‘s “Feathers and Foundations” finds Thomas Davies in trouble for not controlling the ravens in his new role as Ravenmaster at the Tower of London. It’s a struggle, for the ravens answer to Air while Davies is an Earth mage. It’s struggle that ends when Davies must use his power to heal.

Dayle A. Dermatis‘s “Hearth and Family” is a little bit fairy tale and a little bit persecution as a new family is formed and torn asunder. It’s the boy’s return that accelerates decisions. It’s a sweet story and only a bit clichéd.

Louisa Swann‘s “Secret Friends” is an anomaly in the Elemental Masters series in that its protagonist, Nettie, gains cooperation from Air, Water, and Earth spirits. It’s a brief glimpse into her life, albeit a very dangerous episode in which she might lose her brother.

Elisabeth Waters‘ “Fire’s Daughter” finds an upper-class girl battling her mother over whether she’ll be a “proper young lady” or an independent young woman. It’s both funny and sad as it reinforces the narrow view Victorian society had of what a woman could do.

Cedric Johnson‘s “Picking Up the Pieces” is cute but juvenile and the writing needs a LOT more polish. I think he included every idea he had about the story.

Jennifer Brozek‘s “The Price of Family” is somewhat selfish and somewhat righteous, and the whole of it is more real than I think we’d want to admit. It’s a choice between which family to save: Josie’s new family or reuniting a mother with her son.

Tanya Huff‘s “Arms of the Sea” is both tragic and uplifting. I know. I seem to be quite confused about events in the previous story and this one, but if you read them, you’ll understand. It’s a young crippled woman who battles against those who care for her, who only see a crippled person. But Marie manages to get her way and accomplish quite a bit. A good example of a complete story.

Ben Ohlander‘s “London Falling” is disgusting and depressing, even as this sibling finally becomes an adult.

Michele Lang‘s “The King of the River Rats” finds an intrepid woman reporter going against Tammany Hall to investigate the increasing number of missing girls. It’s a quick, fun read.

Jody Lynn Nye‘s “Air of Deception” continues on from Elemental Magic: “Air of Mystery” with Aurelia saving another’s life with her swift thinking and deft hand with perfumes. I did enjoy this story, almost as much as I enjoyed that first one I read.

Stephanie Shaver‘s “Fly or Fall” finds Aurelia fleeing her gift. It takes a young girl and her mother’s ignorance to reconcile Aurelia with her own power. A good story that is well written.

Rosemary Edghill and Rebecca Fox‘s “Bone Dance” is confusing in small ways. For one, I have no idea how the title relates to the story. I had to hunt to understand how various characters were related and some aspects were rather juvenile. And what’s with this Council? What happened to the White Lodge? The story has promise, but needs work.

Ron Collins‘ “The Flying Contraption” concludes that one should never stop making mistakes, lol. Of course, you have to clean up after. It’s a cute story and well written about a very curious little girl and the Wright brothers.

Gail Sanders and Michael Z. Williamson‘s “A Peony Amongst Roses” is an unexpected foray into peony gardens and their value in protecting the royals. Sure I love peonies; they are absolutely gorgeous, but Sanders/Williamson do nothing to elucidate on this. Yeah, I know. It protects against evil. I’m sorry but it’s too vague for me on how the peony accomplishes this. I guess short stories aren’t required to be complete. It is cute with lots of interesting detail, except that one that I really want.

Mercedes Lackey‘s “Into the Woods” is an excerpt, the start, from Blood Red, 10. I see this as a cheat of a short story even though Blood Red is a good story.

The cover is a collage of the short stories and begins with a bright blue and purple set of draperies for the background, an inset rectangle with a woman in yellow and a man in a top hat with a cat sitting atop the rectangle and a pair of birds flying at them.

The title is basic enough, for it is Elementary: All-New Tales of the Elemental Masters.

Book Review: The Wizard of London by Mercedes Lackey

Book Review: The Gates of Sleep by Mercedes Lackey

Book Review: The Robin and the Kestrel by Mercedes Lackey