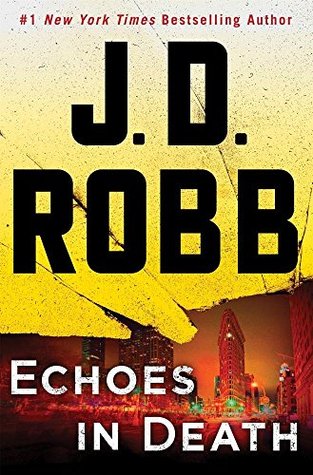 Forty-fourth in the In Death futuristic romantic suspense series and revolving around Lieutenant Eve Dallas and her hunky hubbie, Roarke. The series is set in the New York City of January 2061, less than a week since Apprentice in Death, 43.

It’s all about the outrageous self-entitlement. Jesus. It’s hard to believe jerks like this one exist. How do they reconcile that with reality? Oh, wait. They have no sense of reality. How do parents not see this? How do they successfully hide it from everyone when one’s ego is the size of earth?

Perspective-wise, while Eve has the primary perspective, it’s third-person subjective point-of-view, as we also hear Roarke’s frustrations. What’cha gonna do?

It cracks me up how disappointed Eve is every time she shows up at a Roarke-owned building. It’s just no fun for her!

It amazes me, every time, how the protagonists solve a mystery. The slow build-up of clues, connecting the dots, dissecting the psychological aspects, who and how all the people interweave, and the thoroughness of that slow tedium of addressing every possibility. It does help that they have some truly amazing computer capabilities. I wanna live long enough to have some of these toys!

You know that bastard Strazza was abusing his wife, but when Robb lays out the details on it…I’d’ve killed him myself. Just slower. Yep, it’s all the indicators from isolating the victim from friends and family; verbally, physically, mentally, and emotionally abusive; the destruction of the victim’s confidence; denigrating their abilities. If you know someone who fits any of this, be there for them. Help them if you can.

There’s a funny bit in here in which some woman asks Dallas if she’s Marlo Durn’s stunt double in The Icove Agenda (Celebrity in Death, 34)…she looks just like Marlo! People. What’cha gonna do, lol…

Yep, Dallas has her classic twisted-about aphorisms: “cross the i‘s, dot the t‘s, etc. It gets so boring the other way around, *grin* I do wonder if she deliberately screws these up.

On a side note, I love the sound of Eve’s new office and that “closet”. And it just goes to Robb’s character arc for Eve, as Eve evolves.

Yep, this one echoes for me as well.

A woman, naked, bloody, and dazed, stumbles out in front of a car one freezing night, and Lieutenant Eve Dallas springs into action.

It’s the Devil, the Devil who did it. For Eve Dallas, it’s a question of where he’ll show up next.

Lieutenant Eve Dallas is in charge of the Homicide Division for the NYPSD. Roarke is her gorgeous, supportive, billionaire husband always willing to lend a hand. Summerset is their majordomo.

The New York City Police and Security Department is…
…the NYPSD. Detective Delia Peabody is Dallas’ partner. The rest of Homicide includes Detectives David “Horndog” Baxter, Santiago, Carmichael, Reineke, and Jenkinson of the lurid ties (he’s married! With kids!). Captain Ryan Feeney is the head of the Electronic Detective Division (EDD); Detective Ian McNab is one of his bright stars and Peabody’s significant other.

Detectives Nikki Olsen (she once dated Baxter) and Tredway with the Special Victims Unit investigated past cases.

Dr. Charlotte Mira is the NYPSD’s chief profiler and is as a mother and a friend to Eve. Chief Tibble is in charge with Captain Jack Whitney Dallas’ immediate supervisor. Cher Reo is the assistant district attorney with a departing boyfriend. Sixteen months as a teacher with Literacy Warriors in Sierra Leone!?

Friends of Dallas and Roarke’s include…
…Nadine Furst, a top on-screen reporter and friend, who wrote the very popular The Icove Agenda that became a hit movie with seven Oscar nominations. Trina, beauty stylist, is the bane of Dallas’ existence. Mira is now going to her, lol.

The sweet, organized Daphne Strazza is the twenty-four-year-old multiple-times victim. Dr. Anthony Strazza was a highly respected orthopedic surgeon whom everyone despised. His mother is a retired physicist; his father is a neurologist. Daphne was raised by Gayle and Barry DeSilva after her parents were killed. Tish DeSilva is passionately her sister. Strazza’s first wife now lives on a sheep station in Porongurup, Australia.

Dr. Del Nobel takes a proprietary interest in Daphne’s well-being. Rhoda and Jilly are some of the nurses. Officers Marilynn Walsh, Karen Lorenzo, and Zoey Russe will provide protection.

Randall Wythe of Wythe, Wythe, and Hudd is the executor of the Strazza will. Carson is his admin; Donna Midderman is the receptionist. Wythe knew Strazza for more than twenty-five years and liked him about ten days of that time. His son, Detective Nelson Wythe is under Lieutenant Mercer. Wesley Drummond is a high-end celebrity lawyer in for a rude awakening.

Victims include…
…Dr. Lucy Lake and Dr. John O’Connor. Their housekeeper, Alice, has a husband on the job, Sergeant Tom Clattery at the 1-1-3. Karl is Dr. Lake’s assistant. Greg is the day doorman; Pete the night.

Rosa and Neville Patrick were newlyweds at the time; Rosa is still incredibly traumatized. Astra Patrick is Neville’s mom and a screenwriter. Both Rosa and Neville are part of On Screen Productions, a video production company, in partnership with the protective Kyle Knightly, a cousin of Neville’s (through their mothers); his parents are Lorinda Mercer and Quentin Knightly. Justin was a previous boyfriend of Rosa’s.

Zella Haug is Neville’s admin. Other employees include Boris; Micah (married to Kate); Bry; Jen; Myra Addams is with SAR; Barry; Adrianna Leo, Wendy Rush, and Joe P. Foxx are stars; Mags is their top makeup artist; Uma is in wardrobe; Max Bloombaum is the whiz at monster makeup and prosthetics; Karyn Peeks is an assistant director; and, Charles.

Ira and Lori Brinkman had returned from a Thanksgiving with family. Maxine is their housekeeper. Lori is a lawyer and writes screenplays for fun. Lori uses Arthur at Serenity for cut and color. Lilia Dominick is their “border collie”; she’s fierce at keeping them corralled, organized, and on time. Chase Benson.

Xavier and Miko Carver. Nina Washington is their housekeeper and had been with Miko and/or her mom since Miko was ten. Officer Aaron was the first on-scene.

Jacko’s is…
…a popular catering company that’s family-run, including Uncle Jacko, his wife Gula, Xena is their daughter, her brother Noah worked as bartender, Brooksie, Hugh is a nephew, Nat, Bryar Coleson, Zach, Elroy, Lacy, Marty, Rachel, and Trevor. Anson Wright, a.k.a., George Splitsky, is a bartender/actor with some successes.

First Class is another catering company. Darcy Valentine owns Valentine Event Coordinators. Friends who have used one or both of these companies include Marlene Dressler and Rhia and Marshall Vicker, friends of the Brinkmans.

Loan Star Rentals is…
…the company you go to when you need to rent tables, chairs, etc. Carmine Rizzo is the cooperative owner. Employees include Oliver Quint (Chachie is a bad friend; Marletta was at Lorenzo‘s party), Luca DiNozzo, Stizzle, Charlie, and Mac.

Guests at the Strazza party included Dr. Hannity, Mrs. Wyndel, and the Brinkmans.

Potentials include artists Dana Mireball and Lorenzo Angelini; Delilah Esterby is a sexy bombshell of a model who uses sex to sell products and her husband Aidan Malloy of the seriously rich Malloys; Jacie and Roderick Corbo are trust-fund babies (I wanna be a trust-fund baby…); Gregor, chief of emergency medicine, and Camilla Jane Lester, bimbo wife; Gloria Grecian does musical comedy and her husband, Maurice Cartier, is a choreographer; and, Ann-Teresa and Ren Macari are trust-fund babies.

Toya L’Page and Gray Burroughs live in a converted church; Gemma Burroughs is Gray’s very protective and annoying sister who’s staying with them. Pauline is their housekeeper. Junie Wyatt is a friend of Gemma’s; Catherine Frummon is her mom and Abbott Wyatt is Junie’s dad.

Richard Troy was Dallas’ extremely abusive father. Marco is the everyday droid; Astra is the sex droid programmed for some really disgusting activities, well, disgusting because she’s programmed to want the violence.

The cover is speckled strokes of yellow raying down to the Flatiron Building in this red-hazed city street scene. The author’s name is HUGE in an embossed black against that yellow while the title is an embossed white at the bottom.

The title is the reverberations Eve and Roarke experience throughout the story, Echoes in Death.

One response to “Book Review: Echoes in Death by J.D. Robb”