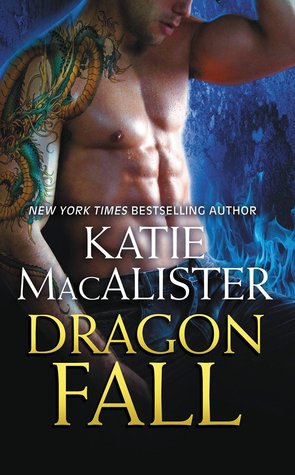 YOU FLIRT WITH FIRE...

For Aoife Dakar, seeing is believing—and she's seen some extraordinary things. It's too bad no one else believes that she witnessed a supernatural murder at an outdoor fair. Returning to the scene for proof, Aoife encounters a wise-cracking demon dog—and a gloriously naked man who can shift into a dragon and kiss like a god. Now thrust into a fantastical world that's both exhilarating and terrifying, Aoife is about to learn just how hot a dragon's fire burns.

WHEN YOU DATE A DRAGON

Kostya has no time for a human woman with endless questions, no matter how gorgeous or tempting she is. He must break the curse that has splintered the dragon clans before more of his kind die. But his powerful attraction to Aoife runs much deeper than the physical—and there may be more to her than even his sharp dragon eyes can see. To survive the coming battle for the fate of his race, he needs a mate of true heart and soul . . .

First in the Black Dragons paranormal romance subseries (eleventh in the overall Dragon Septs series) and revolving around clans of shapeshifting dragons. The couple focus in Dragon Fall is on Aoife Dakar and the so-angry Kostya with the start in Sweden before flying into Paris. Okay, okay, there is a side trip to Abaddon.

This ARC was sent to me by NetGalley and Forever for an honest review.

I enjoyed this a lot more than MacAlister’s Aisling Grey: Guardian series. At least Aoife is more intelligent in her actions! Kostya is most definitely an alpha male whose confusion is hilarious when Aoife first meets him. That girl runs rings around him, lol. Seems that shrink taught her some useful tools.

“‘I am not sweet!’ He looked even more outraged, if that was possible. ‘I am a wyvern! I am the stuff of nightmares!'”

It’s a fun war with Aoife every bit as stubborn as Kostya, and she keeps turning things around on him. That girlfriend bit, the ring, her insisting she’s his mate while he insists he’ll never take another mate (*eyebrow waggle*). The reaction of Drake to Kostya is hysterical. Every. Single. Time. They meet. LOL. It does have a cartoonish vibe to it, partly due to the melodramatic comic reactions.

I do adore Jim. He is so funny and gross, lol. In this one, he’s got amnesia and has totally forgotten all about Aisling.

“There’s not a breath I take that does not need you to complete it. The sun rises, and the moon sets, and without you, it would all be meaningless.”

Ain’t that the truth! Aoife wants to help the guy on the beach, and she’s worrying that he’ll slap a lawsuit on her.

“Too much talking and not enough writhing in ecstasy. You will commence writhing now.”

I love that Aoife is a decent person with a rational view of the world. Yeah, not what you’d expect of someone just released from the nuthouse, although I eventually tired of her ridiculous swearing. I think part of my annoyance was because I don’t think I could have been so continuously creative.

I’m a little confused. MacAlister claims that Drake’s house takes up half a block, but the housekeeper has to vacate her room so Kostya and Aoife can have her room? How long is this block?

I’m a bit back-and-forth with Dragon Fall, and on the whole, I enjoyed it very much. It’s a fluffy bit of nonsense that will keep you laughing and groaning.

For Aoife Dakar, seeing is believing — and she’s seen some extraordinary things. It’s too bad no one else believes that she witnessed a supernatural murder at an outdoor fair.

Returning to the scene a few years later for proof, Aoife encounters a wise-cracking demon dog — and a gloriously naked man who can shift into a dragon and kiss like a god. Now thrust into a fantastical world that’s both exhilarating and terrifying, Aoife is about to learn just how hot a dragon’s fire burns.

Aoife (Dakar) Ndakaaru is a perfectly normal woman whose deceased parents were an architect father from Senegal and a harp-playing mother from Ireland. Rowan is her brother and has a job in Malta. Bee Ndala is her sister who lives in Venice.

Effrijim, a.k.a., Jim, is Aisling’s annoying and too-funny lesser demon of a Newfoundland dog. Only he’s got amnesia and is now Aoife’s.

Konstantin Nikolai Fekete, a.k.a., Kostya, is a confused and angry black dragon, the wyvern of the black dragons (who have an affinity for arcane magics), who washed up on the beach. Cyrene forced Kostya to declare her his mate (Up in Smoke, 6, and Me and My Shadow, 7).

Drake Vireo is his younger brother, a green dragon mated to Aisling, a Guardian (see the Aisling Grey: Guardian series). Pal and Istvan are two of Drake’s bodyguards. Suzanne acts as cook and housekeeper. Nora is Aisling’s Guardian mentor.

Bastian and Gabriel are more dragons, wyverns to be exact, of the blue and silver dragon septs. May (Playing with Fire, 5, and Up in Smoke) and Ysolde (Love in the Time of Dragons, 8) are their mates. They have their own mates union.

Paris
Rene is Aisling’s taxi driver friend in Paris. Jovana is the Venediger, a mage who controls the Otherworld in Europe and is based at the Goety & Theurgy bar in Paris. Guillaume seems to be her aide. Cecile, a Welsh corgi, is Jim’s beloved.

Anton is a red dragon, and the red dragons are part demon!

Sweden
Dr. Kara Barlind works at the Arvidsjaur Center for the Bewildered. Dr. Anders Ek is a retired physician. Thor was a very rude young man back in Aoife’s younger days. Kurt is, I think, the strong man at the GothFaire and also a mage of some sort??? Terrin was Aoife’s date two years ago when he died and came back to life. Seems he’s a steward in the Court of Divine Blood.

The demons
Asmodeus is a demon lord and the head villain of Abaddon and the seven other demon princes. He took over from Bael. Magoth is another demon lord to whom Jim was bound so he could go undercover in Abaddon. He is a former prince of Abaddon who is fascinated by Kostya and Drake’s mother, “the wickedly inventive” Doña Catalina. Amy is the lord of twenty-six legions and servant to Ashtorath.

Bael, the most powerful demon lord ever, was banished to the Akasha.

A weyr is a collective group of dragon septs. A wyvern is a dragon sept leader. Abaddon is what we think of as Hell. A demon lord is anyone to whom a demon is bound. A bane is the opposite of a ward and intends to do harm while a ward is intended to protect.

The cover is pretty! The blue fires of Abaddon are sizzling in the background while in the foreground is a lovely hunk of man-, er, I mean, dragonflesh. Kostya is wearing jeans and a gorgeous green dragon tattoo up his right arm and across his shoulder. Although, I would’a thought he’d have a black dragon tattoo…?

The title is all about Kostya, for he takes a Dragon Fall in this one.