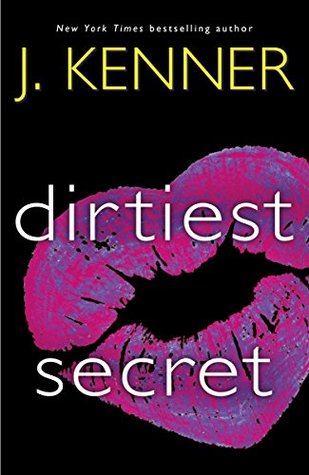 This book may be unsuitable for people under 17 years of age due to its use of sexual content, drug and alcohol use, and/or violence.
Buy on Amazon
Goodreads
Also by this author: On My Knees

There’s a reality to Dirtiest Secret when Dallas considers Jane’s book, the happy ending the kids get, and knows that the end is never happy for the victims, for both Dallas and Jane are totally destroyed with what they see as their dirtiest secret. The blame for which goes to their kidnappers for the brutality and brainwashing and to their “parents” for creating conditions for the “sin”. And both Dallas and Jane drive me mad with their whining.

I understand why Dallas feels so broken, and there are some amazing(ly) disgusting revelations towards the end. Kenner did drive me rather nuts with all the hints she kept dropping. I’m certainly never going to understand people like Dallas and Jane’s kidnappers. That mindset, what they do to the kids…gawd. My imagination careened all over the place!

Dallas sure is doing a good job with that front he puts up; his parents and Jane all think it’s true. More of Dallas’ issues include his adoptive father’s reactions to the kidnapping. How quiet he kept it, the control he held over it.

Dallas and Jane are between a rock and a hard place, um, places? They love each other and want to be together, and when they are together, the guilt and fear forces them apart. I dunno, can’t they get unadopted?? They cope as best they can: Dallas has Deliverance, and Jane has taken a public stance against vigilante groups.

Henry Darcy hired Deliverance to get his girls back, and now he’s blabbing about it? Okay, I guess I can understand that, the relief he feels, the fears I’m sure he feels for other parents suffering. But he must be a smart man to have accumulated the kind of wealth that attracts kidnappers. Wouldn’t he realize the danger he’s putting Deliverance into?

Ooh, ick…seems Deliverance’s name was inspired by the movie of the same name. I do like the reasoning behind it, lol.

I’m with Brody. Jane shouldn’t feel guilty for her and Dallas surviving the best they could during that ordeal. That Stacey is pretty smart too, *grin*.

And I’m wondering if the Woman is Adele.

Six people had kidnapped Dallas and Jane seventeen years ago. And Dallas has been trying to find them ever since. It’s the whole reason behind Deliverance. Now his chance for the sixth person has come with the arrest of one of them. Until…

It has to be an inside man. Someone who doesn’t want the truth coming out. Meanwhile, Dallas and Jane are struggling with their own dreams and fears.

Jane Sykes Martin is technically Dallas’ sister. And they love each other. Now she’s a writer, and her book, The Price of Ransom, is about to be made into a movie. Bill Martin is her ex-husband and is still a research source for Jane’s writing. Gregory Allan Brody is one of Jane’s best friends — and knows ALL her secrets; he’s also a professional Dom who tends bar and is married to Stacey, who is in remission from the cancer now and back to work part-time as a specialty travel agent. Ellen is Jane’s housekeeper.

Dallas Sykes is the King of Fuck, and a very manipulative one at that. He took over as CEO of the retail side of the Sykes empire five years ago. It’s good cover for his Deliverance work. Archie Shaw has worked for the Sykes family for 45 years; for the last ten, he has worked exclusively for Dallas as manservant, valet, confessor, and friend. Gin Kramer is Dallas’ corporate secretary; she used to be Eli’s assistant. Susie is the “eager” flight attendant aboard the Sykes jet.

Eli Sykes is a billionaire retailer married to Lisa West Sykes, Jane’s birth mother. Colin West is Jane’s birth father, but he has some very bad habits, and Lisa divorced him. Eli and the Wests had been good friends. The dead Donovan Sykes had been Eli’s brother — and Dallas’ father. Dallas’ mother is/was? a junkie. Mr. Fluffles is the bunny Jane gave five-year-old Dallas when he first arrived. Poppy is the great-grandfather about to turn 100. Becca has been his live-in nurse and crossword helper for 20 years. Grams is Eli’s 80-year-old mother.

Deliverance is…
…a covert vigilante team that rescues kidnapped children. It started when Dallas became determined to find his kidnappers. Its South American headquarters is a well-hidden and protected house that Dallas has camouflaged in a most unique way. Liam Foster is the son of Helen Foster, the live-in housekeeper, when Jane and Dallas were growing up, and they’ve been best friends forever. Now Liam is a badass whom everyone thinks works for SysOps, a private security company under the Sykes conglomerate. Quince Radcliffe was a fellow student with Dallas back then. Now he’s an MI6 operative and unofficially one of the core members; he’s well-trained in interrogation. Noah is their computer and tech guru. Antonio is the fifth member of the team.

WORR is…
…World Organization for Rescue and Rehabilitation, a private group that consults with and provides investigative support to law enforcement with its focus on rescuing kidnap victims. Bill Martin works for them.

Dallas dated Adele West, a therapist, for six months after she got divorced from Colin West, the only woman “who’d go with [Dallas] into the dark”. Myra and Nina are more of Dallas’ “conquests”. Sarah is Lisa Sykes’ best friend. Ron and Andy were the childhood friends with whom Dallas had gotten into trouble. Leo is one of the book club attendees. Damien Stark makes a cameo appearance. Peter Crowley is a real estate developer.

Henry Darcy‘s eighteen-year-old twins were kidnapped and sold into white slavery. Elaine Darcy is the girls’ paternal grandmother with connections, and she wants to shut a vigilante group down. Liu Ming-húa is the Chinese boy who was kidnapped.

Lionel Benson is…
…a dishonorably discharged ex-Army colonel with his own vigilante group that is more interested in the money aspect.

Mueller is a German kidnapper who knew something about Dallas and Jane’s ordeal. The Jailer and the Woman were the primary kidnappers and torturers. Silas Ortega was one of them. Eva Lopez‘s father owns land that borders Ortega’s.

St. Anthony’s was…
…a prestigious boarding school in England. Dean Phelps was in charge then. Donna lived in London and was a friend of Jane’s.

Evening Edge is a television news magazine where Jane gets a gig to promote her book. The Cellar is a downtown kink club that Dallas visits.

The cover is graphic with its black background and the red-violet lip print filling it. The title is all lowercase and white across the lips with the series name in a paler violet at the bottom left corner. The author’s name is in a soft yellow.

As you read, you will think you know The Dirtiest Secret. Trust me, you don’t.

Book Review: On My Knees by J. Kenner