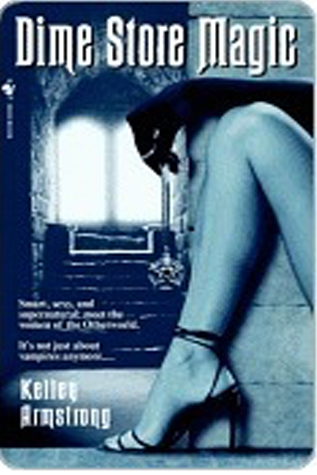 Third in the Women of the Otherworld urban fantasy series that began with Elena Michaels and Clayton and Jeremy Danvers and incorporated Paige Winterbourne and Savannah Levine in the second installment. This particular story revolves around Paige and Savannah in East Falls, Massachusetts.

Bigotry, pride, and fear are the name of the game, as Paige’s coven is terrified of dark magic and witches who are not in a coven. Attract attention, bring a sorcerer into the game, and they are gone. Behind the door, under the table, fleeing through the woods. Gone. Paige is slightly better than them, but still has that fear that will take an extremely patient lawyer to overcome.

It’s through first person protagonist point-of-view that we learn how much Paige hates that the covens have lost sight of their mission, to regulate and help witches. Their self-serving fears and the depths to which the coven will betray anyone to protect their selves. What Victoria did? Omigod. It was unbelievable. I sure hope that witch gets her karmic payback by the end of the series!! As for Savannah’s aunt…I can’t believe that she’s doing nothing to help her…of course, that may be for the best considering her aunt. I despise the majority of the witches in that coven. What namby-pambly cowards they are! This follows with what Paige learns about those grimoires and yet another coven betrayal.

It’s not only the coven that betrays but Kristof’s own people as well. A huge betrayal, and it’s his own fault for being such an arrogant jerk. Lucas is betrayed as well, but hey, nothing he didn’t expect.

It’s a potful of conflicts and lessons, from Paige’s frustration with the timidity of the witches and their so-so spells, their refusal to stand up for fellow witches, and we can only hope we all remember to never make a big change in our lives when we’re suffering from grief.

A bit of back history explains why there is such enmity between sorcerers and witches. Talk about scumbags!

There’s plenty of action and mayhem, although there are some frustrating scenes as well. For one, I do NOT see why Paige should feel guilty about that first death. The guy was a pig, and as for having to hop to Ms Shaw’s demands? Pshaw. Tell her to mail it or drop it off on Paige’s doorstep! Although it did make for an exciting action sequence, lol. Then Paige whining on and on about not wanting to hire Lucas, although he’s clearly the best man for the job! Oy.

All I can say is that Paige is gonna hafta learn how to cast a spell and hold a shield.

Leah has a proposition for Kristof Nast. One he’s all too willing to take her up on. And so Leah sues for custody of Savannah, setting off a string of events that would please any demon who adores chaos.

Unfortunately for Leah, Paige already knows her qualities, and there is no way Paige will relinquish custody of the young teen. No matter how threatening her coven becomes. Savannah is a witch and deserves the protection of the coven.

Unfortunately for Paige, her selflessness and determination only angers the coven, strengthening their beliefs that Paige is too young to know what’s right for them. And now Savannah is being pursued by a dark faction of the supernatural underworld. A vicious group who will do anything to woo the young, malleable, and extremely powerful neophyte, including commit murder — and frame Paige for the crime.

It’s an initiation into adulthood, womanhood, and the brutal side of magic that Paige will have to do everything within her power to make sure they both survive.

Paige Winterbourne is the new leader of the Coven in East Falls, now that her aunt/mother is no more. For her day job, she designs websites for women tired of male web designers who all believe that women want flowery wallpaper. Savannah Levine, the notorious Eve Levine‘s daughter, is an orphan consigned to Paige’s care by Ruth. Eve had practiced the darkest of the dark magics. Paige has her grimoires.

Web clients include Julie who is with Bay Insurance and Brock Summers from Boston who is with the new England Perception Group.

Lucas Cortez, a sorcerer and the son of Benicio Cortez, is a lawyer who prefers the pro bono cases.

The Interracial Council is…
…an organization for supernaturals, excluding sorcerers, dedicated to preventing the misuse of power. Paige’s mother, Ruth, had been the head of the council.

…where Paige’s coven is headquartered. Grantham Cary Sr and Jr have a law office in town. Lacey is Grantham Jr’s wife and the office receptionist. Roberta Shaw is a lawyer with Williams and Shaw. Melinda’s is a great bakery where Nellie is a cashier. Mabel Higgins, who has never stepped foot out of Massachusetts, runs a Chinese restaurant, the Golden Dragon. You do NOT want to read her idea of chow mein! Miss Harris is Paige’s very nosy neighbor. Peggy Dare is with the Massachusetts Department of Social Services. Councillors Bennett and Phillips have an offer for Paige.

Ted Fowler is the local sheriff. Travis Willard is one of the deputies. His wife, Janey, is friendly with Paige. Detective Flynn is just doing her job.

The Coven of East Falls
…consists of fourteen witches and five neophytes, girls ranging from 10 to 15 years old. The Elders include Victoria Alden, Margaret Levine (aunt to Savannah) who is the keeper of the coven’s books and a volunteer head librarian in East Falls (she’d been the high school librarian until she retired), and Therese Moss. Abigail “Abby” Alden is one of the few on Paige’s side. Grace, Abby’s older sister, has a daughter, Brittany, who may be friendly with Savannah. Tina Moss is pregnant. Megan Moss is the youngest neophyte. Sophie Moss is 93 and succumbing to Alzheimer’s.

The Danvers Pack
Jeremy Danvers is the alpha and an artist. Elena Michaels, the only female werewolf and an investigative journalist, and the terrifying Prof. Clayton Danvers, her partner, are part of the pack. All three are friends of Paige’s.

Robert Vasic is a Tempestras half-demon and professor, married to Talia, who has a son, Adam Vasic, an Exustio half-demon.

The cabals are sorcerous organizations which run as a business with a CEO, then a board of directors composed of sons, brothers, uncles, nephews, and cousins with employees any supernatural who won’t eat them for lunch, but only one witch per cabal. Their primary mission is money, making lots and lots of it.

The Nast Cabal is…
…the biggest. Kristoff Nast is the son of the CEO, Thomas Nast. Todd, an Igneus, has succeeded Russ, a Ferratus, as Kristof’s bodyguard. Olivia (retired) and her daughter, Greta Enwright, were/are Kristof’s witches.

Leah O’Donnell, a telekinetic half-demon, is one nasty piece of work (we first met her in Stolen, 2) who happens to be a deputy sheriff in Wisconsin. Gabriel Sandford is a lawyer with Jacobs, Sandford, and Schwab in L.A. Friesen and Anton are half-demon guards and part of Leah’s team.

The Cortez Cabal is…
…based in Miami and the most powerful. They are also the ones who precipitated the Break between witches and sorcerers. Benicio Cortez is the CEO and Lucas’ father. His wife, Delores, and his brothers have put a bounty on Lucas’ head.

Salem, Massachusetts, 1692
Tituba was an old slave who belonged to the Reverend Samuel Parris. Betty was his young spoiled daughter. Armstrong has an interesting interpretation as to what caused the Salem witch trials.

Demons
There are two types of demons: eudemons, a.k.a., nonchaotic, are the good ones, and the bad are cacodemons, a.k.a., chaotic demons, the only ones who can procreate with a human female, producing half-demons who inherit qualities from the father and are always human in appearance. There are different hierarchies with the level of any one demon depending on how powerful they are, with archdukes the most powerful. An Exustio burns, ignites, and incinerates; an Arduro induces burns and ignites flammable objects; and, an Igneus induces first-degree burns. Ferratus can harden their bodies. Tempestras control the weather.

Witches are always females with only defensive spells; sorcerers are always male with plenty of offensive spells. The Hand of Glory is dark magic and a thief’s tool. Jorge, okay, okay, his real name is Bill, sells Satanic Rights. Isaac Katzen was a sorcerer, who had tried to build his own cabal (Stolen, 2). Ted Morton, a paranormal investigator, tried to break-and-enter. Wiccans show up. Katrina Mott was shot to death. Bob, Joe, and Sylvia are treasure hunters who like to use ghosts. Koyut feed off energy. Jaime Vegas is a necromancer.

The cover is a range of blues in a collage of events from the arched window at the top of the staircase, and near stone wall with a woman’s leg bent, ending in a high-heeled, strappy sandal. One hand is resting on her bent knee, encased in a black evening glove, the fingers holding a necklace with a pentagram pendant dangling. The title is at the top in a simplified gothic font in white while the author’s name uses the same color and font and is located at the bottom left of the cover. An info blurb is just above the author’s name in white.

The title is about the use of Dime Store Magic, cheap, simple conjuring tricks.