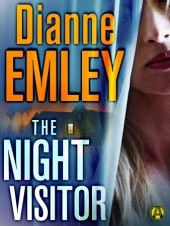 Gorgeous and successful, Rory Langtry seemed to have it all. Daughter of a movie star and sister of a supermodel, Rory was engaged to sexy artist, Junior Lara. But her bright future went dark one terrible, bloody night that left her sister dead and the accused murderer—Junior—in an extended coma.

Now, five years later, Rory appears to have put the past behind her. She has a wonderful new fiancé and heads a successful cosmetics company. Yet dark secrets threaten. Across town, Junior lies close to death but before he departs he seeks to clear his name.

A paranormal thriller set in Los Angeles that will keep you glued to your seat.

This ARC was provided by NetGalley and Alibi in exchange for an honest review.

My Take
This was brilliant and awful, absolutely heartbreaking. Yes, I had niggles, and I’m probably somewhat prejudiced towards this story simply because one of the characters is an artist who had the same dream I had.

Emley dragged me in immediately with Junior’s annoyed questions. Ones that had me wondering what was going on. She further pulls me in with Danny and his predicaments. Yes, more than one. He’s sick. He’s obsessing about Junior. And he has something awful planned. Something from which he doesn’t intend to return. It’s Danny who first tells us how the blackness all panned out. And Emley quickly reduces me to tears. Over and over.

And yet, if Rory knew that Junior was not responsible, why has she never visited him? Why did she let the investigation die? Why did she go along with the party line? The reveal at the end suggests that Anya was protecting different people at different times in her work. If this is true, why was Anya pursuing Junior as she was? Why was she working so hard to create problems between her sister and Junior?

Emley is good at leaving me guessing about Tom and Evelyn. I can’t figure Tom out. Emley goes back and forth with him, questioning what’s happening with Rory, how he feels about it. Will he be supportive? Is he out for what he can get? Is he kissing up to his future mother-in-law? Does he love Rory enough? With Rory slipping away, her contradictory comments, the jabs she’s delivering to Tom, there’s really only the one scene where he lays his concerns out to Evelyn, but it’s all tell.

Rory has her comments about her mother, and at first Evelyn seems a concerned mother, but Emley slips in those subtle moments when you start to wonder about her. It’s at the end that all the truths come out. Horrible. Disgusting accommodations, anything for money.

I do like the twist in how Emley achieves justice. I am in tears for Danny, Junior, and his family. As for Rory, well, I feel bad for Rory, but I don’t like her. She has no loyalty.

It’s so heartbreaking to read of Junior’s current health. All that promise…

There’s so much potential for some truly great drama here, but Emley merely dips under the surface. Still, it’s a surface with waves that will shove you from side to side, into brightness, and down into darkness.

The Story
Opposites — Rory and Daniel — are getting ill. Bothered by visions of doves flying. For Rory, this night, the La Vie en Rose ball, is important to her as it benefits the charity she began, TOV, which makes her the co-hostess. For Daniel, this night is important as he intends to find justice for a beloved brother.

But that night is just the start of Rory’s nightmare, for something or someone is invading her mind, affecting her body.

The Characters
Guillermo “Junior” Lara is an incredible painter who keeps doves on the roof of the Killingsworth, the building he bought to fulfill his dreams, dreams to help other artists, to marry the woman he loves. Daniel Lara is Junior’s baby brother, seventeen when it happened. The promising young athlete who’s slowly dying, coughing, back sores, and more. Sylvia Torres is the sister who continues to give interviews, keeping her brother’s condition in the press, always accusing the Tate family of being in the wrong, of covering up the truth. Elias is her husband, and they have two children, Vanessa and Georgie. Fermina is Junior, Danny, and Sylvia’s devoted mother. She visits Junior every single day as does Danny. Chiclets is the family terrier.

Yvonne Argos is the attorney Sylvia has hired. Ethan Byrd is the artist who discovered the bodies.

The Villa del Sol d’Oro
Rory, a.k.a., Aurora Langtry, is the younger twin. Just as beautiful, but more absorbed in the beauty company, Langtry Cosmetics, she started with seed money from her father-in-law and brought to prominence using her model sister’s face. Tom Fuller is her worried fiancée. Anya is the older twin, the outrageously successful one with the career as a high-flying model. One bought at great expense. Evelyn Langtry Tate married Richard Tate III, a.k.a., Ratsy, L.A. old money. Abigail “Boo” Barrett is Tate’s first wife. Jordan is his secretary. Richie, Richard Tate IV, is a backstabbing jerk with no long-term sense, Rory’s stepbrother, and CEO of Rory’s company. Paige is his wife; Beatrice is their daughter. Leland Declues is the Tate family attorney, Ratsy’s fraternity brother, and a longtime family friend.

Graehme is Evelyn’s assistant. Rosario is the housekeeper; Hector is her husband, and they live in the carriage house on the property with their two children. Donna is Rory and Anya’s aunt, Evelyn’s sister. She’s married to Dave Knight, and they raised Evelyn’s kids. DOB was Anya’s secret caller.

Victoria Newell and Hannah Vorst are a couple of Rory’s friends. Jonah Donati is a hedge-fund manager who dated Anya. Gilles is the make-up artist at Langtry Cosmetics.

The hospital
Johnnie and T. Cordero are guards at the hospital. Corliss is the lead nurse on Junior’s floor; Keith is the night nurse. Robert Patyk is Junior’s roommate.

Dr. Reece Gaspar and Joy and Brad, two nurses, tend to Rory that first time. Dr. Toshiko Ballard is a neurologist. Dr. Templeton is an ob-gyn. Dr. Olga Ostermann is a psychiatrist at the Casa del Fuente. Simon Weber is one of del Fuente’s administrators.

The police
Officer Glen Shortall is the arresting officer at the ball. Sergeant Alex Burke quickly dismisses the arrest. Detective Harry Auburn worked the shooting five years ago; he’s never been satisfied. Detective Gabe Rodriguez is his current partner. Dr. Gene Hedges is the coroner with a blind eye.

TOV is The Other Victims, a charity Rory started in Anya’s name intended to provide aid to families of murder victims. Oscar Han of Kwik Kwality Kut and Sewing buys the Killingsworth building.

The Cover
It’s a nice use of complements — blues and oranges — on the cover. It’s Rory holding a sheer blue curtain aside as she peers through the window of her life. A reflection in the window shows an artist’s brushstrokes in whites, yellows, and oranges outlining a tall building in a twilight sky, one window lit up. The author’s name is shades of orange while the title stands out in bordered white.

The title is more metaphor than truth, for The Night Visitor comes when he pleases, day or night.

Review of You’ll Thank Me For These
Book Review: Grave War by Kalayna Price