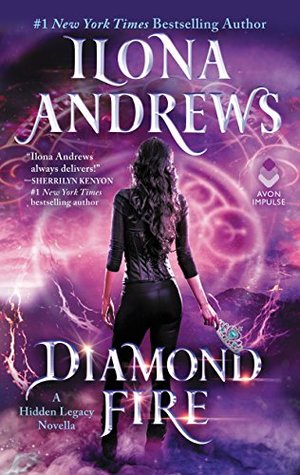 A short story at the end of the Nevada Baylor trilogy as well as the overall Hidden Legacy universe — 3.5. It also serves as an introduction to Catalina’s trilogy around whom this story revolves.

Whew, it’s a lot of story for these few pages! And there’s barely anything of Nevada or Rogan. Well, it does make sense, since it’s really all about introducing Catalina.

The Baylors were brought up right, and I do adore them all! You can’t help it. I especially enjoy the battles between Catalina and Arabella, and I enjoy even more the interaction amongst the whole family. They’re interested in each other, tease each other, and support each other at the drop of a hat.

It’s first person protagonist point-of-view from Catalina’s perspective, and she is terrified of her ability, and “Diamond Fire” informs us as to why she’s afraid of seeing Alessandro. It is also the start of her resolution to understand and control her magic; I liked Andrews’ description of how Catalina physically deals with her magic. It sounds pretty… Andrews also provides us with a look at some of Catalina’s back history, starting with her birth.

An underlying subtheme is one that runs throughout Hidden Legacy: those feelings of inadequacy due to the Baylors working for a living and not being an important House. Heck, they’ve only recently applied to be a House! It doesn’t help that Rogan’s family treats them like the hired help. That Wishing Well company is a sweet, even if short, balance to all the nastiness.

This rudeness is but one of the conflicts that adds color along with the stolen heirloom that must be recovered. There’s a useful bit of foreshadowing that I only picked up at the end, lol. It did make perfect sense *more laughter*.

Rogan’s poor mother wants so badly to have family around, to bring back the days of her childhood when they played together. Too bad that half her family feels so entitled! You’ll be shaking your head…and I’ll be hoping no one has family this bad.

It’s fascinating to read how the Baylors figure out the clues, part of which requires understanding House politics. Ack! It’s that analysis along with the action — all character-driven by the good guys and the bad guys. And in typical Andrews-fashion, it’s a fast-paced tale that I hate to have end.

I just know that rapier duel is another bit of foreshadowing…Sapphire Flames is going to be a pip.

Unsurprisingly, none of the wedding planners lasted, and now it’s down to Catalina and Arabella to ensure Nevada and Connor’s wedding happens.

It helps that the girls watched thirty-some episodes of Whose Wedding Is It Anyway? and four seasons of Bridezilla.

The Baylor Investigative Agency was…
…started up by their dad and employs the whole family. Catalina Baylor, a Prime, is the middle sister who moved into Nevada’s room that morning. She’s also Nevada’s maid of honor. Arabella is the youngest sister at fifteen, and Nevada the oldest, a Prime Truthseeker, and the head of their emerging House. Nevada has just moved across the street to Rogan’s place. Grandma Frida‘s talent is talking to armored vehicles, and she rebuilds them to sell to Houses. Frida’s daughter, Penelope, is their mom and a damned good sniper. Bernard “Bern“, a cousin, is a Significant Patterner attending college. His brother and another cousin is Leon who finally discovered his talent in Wildfire, 3. Aunt Gisele is Bern’s and Leon’s loser mother. Grandma Victoria is Nevada, Catalina, and Arabella’s father’s mother and an absolute nightmare.

House Rogan
Connor “Mad” Ander Rogan is a ruthless fourth-generation Prime Telekinetic — and I do mean prime, folks, whoo-wee — and a billionaire in love with Nevada. He’s also known as the Scourge of Mexico, Butcher of Merida, Huracan, and is the most terrifying Prime in Houston. His mother, Arrosa Ramírez Rogan, is another Prime Telekinetic, who heralds from Spain in the Basque country near Navarre. She’s retreated from the world and lives on her estate, Mountain Rose, out in the desert. Will, a third generation Prime, had been Connor’s dad.

Rogan’s extended family
Rogan likes the relatives settled in the East Wing: Uncle Inigo (Arossa’s brother) and Aunt Emilia and their kids; Uncle Mattin (another brother and the acting head of the family) and his family; and, Aunt Miren (a sister) and her daughter, Cousin Gracia. Gracia’s kids include Adriana/Adrianna (she’s nice). Raul is one of their sons.

Isabella is Markel’s second wife. Mikel, their son who manages Ramírez Capital, a venture capital firm and the family piggy bank, is married to the so-insecure, idiotic Maria who loves white clothes and chunky gold jewelry. Their daughters include the bitchy Elba and June, an environmentalist who is married to Lucian de Baldivia, who works for a computer firm. Samanta is June and Lucian’s daughter. Zorion (he loves soccer and cars) is married to Teresa who is working on a novel, and their daughter, Mia Rosa García Ramírez Arroyo del Monte who always carries her beloved Sapphire, a stuffed unicorn. Ane is single but accompanied by her boy toy, Paul Sarmiento. Iker is Ane’s only child and he’s married to Eva Secada Escudero. Their son is Xavier, a bottom tier Significant Telekinetic.

Malina. Angel is Mikel’s sweet illegitimate son. Kelly Waller is one of Connor’s Rogan cousins, the one who went traitor in Burn For Me, 1. Gavin is her betrayed son.

Alessandro Sagredo, an Italian count, is the powerful Antistasi Prime against whom Catalina was tested. And I suspect he’ll be a prominent character in the upcoming (August 27, 2019) Sapphire Flames.

Valentina’s House Catering is…
…working the wedding. Valentina Krueger owns the place, and Carlos is her XO. They both seem to have a hard time understanding the terms of a contract. Their employees include Jeremy Wagner. Valentina and Carlos suspect Hudson.

Herald is a social media site that focuses on Primes. Michael Sanchez in freshman year was one of Catalina’s “lessons”. Houses are magic families who have at least two Primes, the uppermost tier of magic users. Simon Nightingale‘s disappearance is a case for Nevada. The Sealight Crown is a Ramírez family heirloom. Lance Gibson is employed by the Seattle headquarters for Wishing Well.

The cover is primarily pink blending into purples forming a background of runes and magic circles. Catalina, her long brown hair streaming down her back, is in black leather, her back to us, and her right hand holding the Sealight Crown. At the very top, in a pale blue, is an info blurb. The author’s name is in an embossed gothic white above Catalina’s head. A testimonial in white is on Catalina’s left while the publisher’s imprint fades on the right. Spanning Catalina’s knees is the title using the same white font, but glistening with diamonds. Below the “D” is the series information in pale blue.

The title is the crown with its “Diamond Fire”.