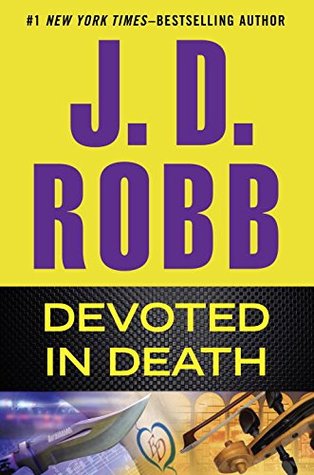 Forty-first in the In Death futuristic romantic crime thriller series and revolving around Lieutenant Eve Dallas and Roarke in the New York City of January 2061. (The dojo is completed.)

I’m conflicted. Devoted in Death is not one of my favorites. It was nice enough, in some ways, but in other ways it was too nice. At least when it comes to Eve and Roarke. I have this fear that once Eve gets completely comfortable with her past, that Robb will end the series, and it is getting there. It certainly is getting easy to predict certain events/actions.

Otherwise, it was a bit ho-hum. I know, what a tacky thing to say when we run into the extremely un-nice couple who are “Devoted” to each other. Oh, Jesus. What a pair. Especially at the end. If evil is required to balance out good, these two have it all taken care of. Gotta wonder about Robb, and how she can keep coming up with people and situations this nasty!! Probably reading the paper and watching the news…how sick is that?!

The jokes continue in the department what with Jenkinson’s escalating ties, Mira inciting the boys to think about Valentine’s Day, Carmichael is gonna drive Dallas crazy with that souvenir she picked up in Oklahoma — they sound pretty yummy to me, lol!

Progress is also continuing in the cop shop with Dallas and DeWinter still settling in and getting used to each other. It’ll be interesting to see what happens when they have that drink! Peabody gets her own case and the department continues to grow in independence and expand. Just ask Santiago — that boy cracked me up with that “NYPSD West” while Trueheart has his own heart-stopping moments.

Marriage-wise, Eve screws up on those dang rules again, and Roarke does make a good point. He gets his own back a bit later with the baby present question *grin*.

The story is very like a cold case as Eve and her team works back in the timeline, following the trail of torturous murders back to their point of origin. I can’t help but wonder if more police detectives worked as hard as Eve, if we would have fewer criminals getting away with it. Of course, not everyone has all the fun e-gadgets and a rich husband…

I hate when people die, and it always seems worse when it’s someone who is good, someone who has promise, who has something to contribute to the world.

I’ve come to wonder if Eve deliberately mangles old folk sayings like cold as a witch’s __, the duck-duck-goose game, etc.

Well, the FBI higher-ups do a balls-up. As usual. But I do like this Zweck. It was lovely how everyone else in law enforcement jumped in to collaborate. The satisfaction came with those interviews. It’s amazing what a couple of dumb bunnies can pull off.

Star-crossed lovers have to live and love every minute to the full…isn’t that what they say?

When Lieutenant Eve Dallas examines a body in a downtown Manhattan alleyway, the victim’s injuries are so extensive that she almost misses the clue. Carved into the skin is the shape of a heart — and initials inside reading E and D.

A couple with dreams of wealth and then torture. It was an accident that first time, one that stoked the flames of an unholy desire.

The trail of evil they leave behind follows them, and little do they realize that they’ve landed in the jurisdiction of Lieutenant Dallas and her team at the New York Police and Security Department. And with Roarke at her side, she has every intention of hunting them down and giving them what they truly deserve . . .

Lieutenant Eve Dallas is the dogged head of Homicide and married to the gorgeous gazillionaire: Roarke, her very supportive lover. Summerset is their majordomo and has been a father figure to Roarke for years. Galahad is their fat cat who keeps trying for that bacon. Caro is Roarke’s highly efficient admin.

The NYPSD is…
…the New York City Police and Security Department of the future. Detective Delia Peabody, a.k.a., She-Body, is Eve’s partner. Her men also include Detective Baxter and his partner, Officer Trueheart (he’s up for the detective exam!); Detective Jenkinson (of the disgusting tie bet); Detective Santiago is usually partnered with Detective Carmichael; and, there’s also a Uniform Carmichael. Captain Ryan Feeney, Eve’s mentor, is the head of the Electronic Detective Division (EDD) and Ian’s boss. Detective Ian McNab is also Dee’s romantic partner.

Dr. Li Morris is the saxophone-playing chief medical examiner and had jammed with Dorian in the past. Dr. Garnet DeWinter is their new forensic anthropologist. Commander Jack Whitney is Eve’s boss. Ms. Denning is a police liaison. Dawson is the head sweeper. Harvo is the queen of hair and fiber. Porter is the medical examiner due for a ripping.

Dennis Mira is Dr. Charlotte Mira‘s (she’s the department’s profiler) dreamy other half with whom Eve is half in love. Cher Reo is the assistant prosecuting attorney Dallas works with most often. Judge Hayden is an amenable guy.

Other police contacts in other states and cities
The very determined Deputy William T. Banner is from Silby’s Pond, Arkansas, with some theories of his own. Chief of Police Lucius Mondale is Banner’s boss. Lydia Bench, Garth Foxx, and their boys run a farmer’s market co-op outside Pigeon Run and both Banner and Peabody know them.

Noah Paston helped a baseball team, Ava Enderson was traveling but her car was acting up, Jacob Fastbinder was a hiker, Melvin Little was a homeless man who had never recovered from Vietnam, Vickie Lynn Simon was a licensed companion, Marc Rossini owned a restaurant, Robert Jansen was a businessman who used to do some boxing and was found in some high brush by Petie West and his mother, and Wayne Potter was a furniture mover.

Jayla Campbell is that ticked off with her now-ex-boyfriend model Mattio Diaz. Kari Whittiker is her practical housemate. Luke Tripp is their neighbor who is infatuated with Jayla. Misty Lane is the buxom blonde. Reed Aaron Mulligan is a good kid and working hard with his band. Benj Fribbet is his best friend. Roxie Parkingston is the lead vocalist. Maddy is Reed’s girlfriend. Reed lives with his mom, Jackie Mulligan.

The opera
The cellist, Dorian Kuper, started the investigation off. Maeve is his Irish house droid. After Midnight is a club Dorian patronized. Stewie is the bartender. Mina McKensie is Dorian’s mother. Jarvis is her house droid. Ethan Chamberlain is Mina’s lover and the orchestra’s conductor. Ellysa Tesh is a violinist secretly in love with Dorian, Theo Barron is an oboist, Hanna is a singer, and Samuel are all part of the group.

“Earnest” Tina R. Denton is the overly earnest fan who became disgusted with a misuse of talent. She’s a real “peach” when Dallas interviews her!

Monroe, Arkansas, is…
…the start of NYPSD West, where Bubba’s Body Shop, Towing, and Pies is located, and where Detectives Santiago and Carmichael are following leads. Bubba Dorran and his son, Jimbo, a.k.a., James Beauregard, are hiding something. Bubba’s brother-in-law, Buck, is a lawyer. Maizie is the mother.

Doorman Frank had gotten the memo…dang it… Father Chale Lopez is the Catholic priest who has counseled and befriended Morris. Justin loves cops, vids, and games. Rosie is his sister. The Minnickers are their unloved neighbors, and just as unloved by Drew Henry Havers, the famous horror novelist, on the other side. Martial art lessons with Master Lu were part of Eve’s Christmas gift from Roarke. Nathan Fitzsimmons is a neighbor of a potential site. Sarri is his aunt. Mrs. Harbor is a neighbor. The Delwickies have gone away for a few days. Curtis Hemming probably ran for cover.

The owners of potentially boosted trucks include Shelley Lynn Waynes; Bowie Nettleton is a master sergeant, retired; and, Barlow Lee Hanks has his own garage in Lonesome, Oklahoma. Curtis Hanks is his nephew. Elsie and Maddox Hornesby own a van. Anthony Charles Lappans has a van as well.

Ella-Loo Parsens met Darryl Roy James — he has a way with engines — in a cowboy bar, the Rope ‘N Ride, in Oklahoma. Cody Bates is an ex-boyfriend. Darra is the baby they had between them. Janelyn is Ella-Loo’s mother.

Richard Troy is the nightmare father Eve killed. Mad Fergus is one of the NYPSD regulars.

Nadine Furst is a friend and a top on-screen crime-beat reporter anxious to find a new, much more secure apartment. Bella is Mavis Freestone and Leonardo‘s little girl coming up on her first birthday — Eve is a godmother! They and Peabody and McNab live in the same building.

The cover is a bright yellow in the top two-thirds which allows the dark purple embossed font for the author’s name to really pop. The lower third is divided into a textured black band (looks like woven rubber) that, again, provides great contrast for the yellow font for the title. That narrow band left at the bottom is a collage of elements from the story: a Bowie knife, a heart outline enclosing an E and D, and a bow with cello scroll against a pale orangey-yellow background of arches and grids.

The title is all about Ella Lou and Darryl who are Devoted in Death.

8 responses to “Book Review: Devoted in Death by J.D. Robb”