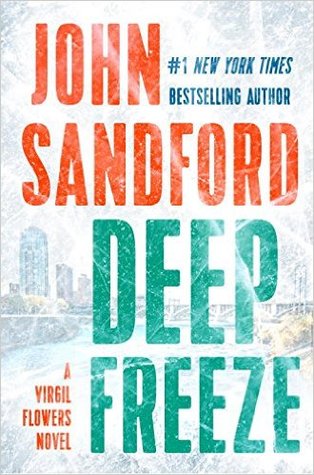 Tenth in the Virgil Flowers thriller series and revolving around a laidback detective based in Minneapolis who roams the state solving crimes. And Virgil is back in Trippton (Deadline, 8).

Sandford is such a tease in this. We have a pretty good idea from the start as to whodunnit, but Sandford dribbles it out, makes you want to read to find out if what you suspect is true. The tension arises from Virgil working his way back to that fateful night, uncovering many of the town’s secrets. And, as always, I’m impressed with how it all gets found out. It’s what pulls me into these mysteries, figuring out the how.

As always, Sandford has that humor goin’ on. Wait’ll you read about those, ahem, altered Barbie and Ken dolls. Even more funny, in a twisted sort of way, is how “helpful” everyone in town is when asked about the “nonexistent” doll factory.

It’s a tangle of issues with all the trappings of small town life, the good and the bad. The good includes friends and a conspiracy to help those in financial trouble while the bad includes self-esteem issues and fear.

Sandford uses third-person point-of-view, which allows us to listen in on various people’s thoughts, hopes, and fears. Theme-wise? I dunno. It’s people in a microcosm with all the negatives and positives. Only those negatives have exploded, and it all stems from how poorly people were treated in high school.

I can’t say it was bullying, but it was a social ostracism. Making fun of someone who doesn’t “get it” emotionally. Oh, he’s a smart enough guy, but he was never perceived as good enough.

The side issues include the poor economy and what people will do to survive. Again, not everyone is thinking straight, and it leads to some “interesting” developments. None that Virgil cares for, that’s for sure!

Sandford ends with an encapsulation of the more prominent characters, each with their own paragraph summing up the after events.

It’s back to Trippton, Minnesota, for Virgil Flowers when the town’s banker pops up dead, frozen like a block of ice.

In charge of the high school reunion, Virgil realizes she most likely died the night of the reunion committee’s meeting. Only…how did she get into the river? And who could have done it?

As Virgil begins to dig into twenty-some years’ worth of traumas, feuds, and bad blood, one thing becomes increasingly clear to him: High school is murder.

Detective Virgil Flowers is a roving agent for the Minnesota Bureau of Criminal Apprehension (BCA). Honus is Virgil’s dog (by whom he was adopted when solving that previous case in Trippton in Deadline). Frankie is his girlfriend who runs an architectural salvage business and has a small farm. She has five sons. Sparkle is her attractive sister.

BCA
John Duncan is Virgil’s nominal boss. Bea Sawyer is in charge of the scene of crime unit that includes Bill Jensen, their IT guy; Don Baldwin is Bea’s partner. Clay Danson, Blue, and Ralph are the divers. Sean. Jenkins and Shrake are the house thugs. Russell Roy is a senior BCA agent who has to interview Virgil. Lucas Davenport is Virgil’s old boss and now a federal marshal. He’s got a tip for Virgil. Kidd is a friend who works the tarot cards for angles. The current governor for Minnesota is as “dumb as a box of rocks … And that’s an insult to rocks and boxes.”

Trippton, Minnesota is…
…prone to the bad. Johnson Johnson is Virgil’s best friend who owns a hardwood lumber mill and lives just outside Trippton. Clarice is his girlfriend. Hank Johnson is a friend.

The unimpressive Jeff Purdy is the Buchanan County sheriff. Luke Pweeters is a deputy with ambition. Alewort is the crime scene investigator…and not available. Ann McComber is the public defender in whom Pweters is interested. Bret Carlson is the county attorney.

Margaret Griffin, a former L.A. cop, is a tiger of a private investigator who’s quick with a baton, working for Mattel Corporation. She’s staying at Ma and Pa Kettle’s River Resort.

The high school reunion committee consists of…
…the insecure David Birkmann, a.k.a., Chips, Bug Boy, Big D, Davareeno, and Daveissimo, was the class “clown” back in the day; today he owns a Dunkin’ Donuts and is the premier exterminator in the area with his company, GetOut! His father had been the Bug Man of Trippton. Alice works the counter at the Dunkin’ Donuts. Marge is the GetOut! office manager. Some of Dave’s technicians include Randall Campden and Bill Houston.

More committee members include Gina Hemming who had been one of the Populars whose grand achievements in high school didn’t quite work out as planned, although she is president of the local Second National Bank. Justin Rhodes, a realtor, is the husband she’s divorcing; he prefers to call himself Justine these days. Dr. Ryan Harney is the town doctor with a questionable past; Karen is his not-so-thrilled wife. Lucy Cheever had been the Homecoming Queen and now owns the Chevrolet dealership with her husband, Elroy. George Brown, the most Athletic Boy, now owns the bowling alley. Sheila Carver had been an old schoolmate of Gina’s until she “fell” even further socially. She is darn good at characterizing her fellow citizens!

Jesse McGovern is running an underground factory producing the Barbie-Os that is providing jobs to a lot of families. Carolyn Weaver and Miz Homer are some of her aggressive workers. Sandy Martinez has put up a wanted poster.

Marv Hiners is the first vice president at the bank. The hustling Rob Knox is “Justine”’s boyfriend who just opened a fancy French restaurant in town, Le Cheval Bleu. Corbel Caine (he operates heavy equipment) is a tough guy who gets crazy when drunk. Janey Cain is his wife and complaisant with his goings-on. Denwa Burke is Corbel’s oldest friend and as stupid when drinking as Corbel. Margot Moore is a certified financial planner running Moore Financial; she’s also Gina’s best friend. Sandy Hart and Belle Penney are Margot’s friends. Kelly Brenner teaches women how to use a gun. Fred Fitzgerald runs a tattoo parlor and is a registered sex therapist — with a collection of whips and chains. He’s a little concerned that he rides a Harley softail and has a conviction for assault.

Cary Lowe works at Home Depot as an assistant manager and enjoys karaoke; Bob Hart. Ben Potter is retired and does love to fish, even in the effluent canal. The Masons own some nice timberland. Janice Anderson is a retired schoolteacher who knows what’s going on in and around town. Ann (Gina’s sister) and Terry Ryan (he’s a surgeon) are Gina’s heirs. The asexual Barry Long (he’d been Homecoming King) is a state legislator obsessed with his politics and owns a greenhouse. John Handy works for the city building department. Duane Hawkins and Rusty Tremblay are some of the ice fishermen. Booger is Rusty’s granddaughter, finally trained to bring him his shoes. Bob Jackson is a post office clerk. Jimmy Barker runs Bernie’s Books, Candles ’n More with a secret back room. Rick James was Gina’s lawyer. Taylor Miller is a divorce attorney. Jerry Williams is another lawyer. Sam Jones is a judge. Janet Lincoln runs the Sugar Rush, a candy store. Lucille Becker is an English teacher. Jay is an assistant manager for a convenience store; Bobbi Cole is a not-too-reliable clerk. Lanny works at Tony’s. Buster Gedney is up at Stillwater after events in Deadline.

Ya go to Club Gold for karaoke; Jerry Clark is the manager. Carroll Wilson runs the Stihl chain saw dealership; his wife, Jeannette, loves karaoke. CarryTown is a mobile home park where Joseph Anderson and a few others live. Shanker owns Shanker’s Bar & Grill and sees more action than Virgil would have liked. The Bunker is the worst bar in Trippton. The Cheese-It does a good Diet Coke.

High school, 1992
George Marx was the assistant principal in charge of discipline. Ralph Filson had played trombone in the band.

The Mayo Clinic is…
…in Rochester, Minnesota. Dr. Peter Thurston is the medical examiner. Laurie is the woman with whom Thurston fell in love. Not at all the type he’d have ever thought. Karl Lone is the death investigator.

Wing and Talon is looking for good owl pictures. Undertime is when you work less while getting paid. Shakopee is the women’s prison; Stillwater is the men’s.

The cover is one giant, cracked ice crystal of whites and deep blues overlaying the city skyline with the author’s name at the top in a deep colonial blue and the title below it in a deep red. The series information and a bit of promotional info are also in red.

The title is all about the victim, in a Deep Freeze.