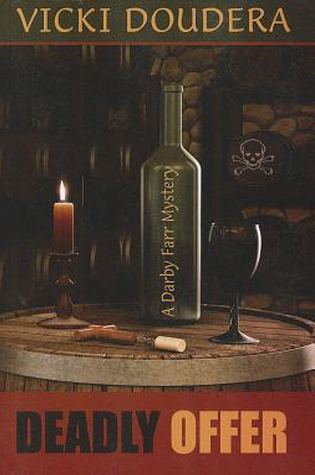 
Third in the Darby Farr Mystery series revolving around an amateur sleuth realtor. This story takes place in the wine country in the Ventano Valley in Northern California.

Boy, talk about a classic warning about how far to trust someone you’ve only met online. Whew…!

Doudera strews the red herrings everywhere, practically on every page! I suspected everyone. And that trick with all the “purchasers”? Ooh, mean, Doudera, just mean, *grin*

Darby has her own character growth going on, and it worries me. She blows hot and cold on Miles, and it appears that he ain’t gonna take it, anymore. As for Carlos, hoo boy, he is too underappreciated, if that quick trigger of his is anything to by. Yeah, yeah, so I get involved with the characters…sue me! *grin*

What makes the whole story more poignant is how much Selena loved her vineyard. What a great life she had going. And I lust after her house! That kitchen sounds so incredible, homey, welcoming, and I wanna go sit down at the table with a cuppa. I gotta say the Contento house and grounds say fabulous as well.

It’s easy to learn all this, and of everyone’s thoughts and feelings, since Doudera uses third person global subjective point-of-view. The characters are a wide-range of personalities and ambitions and too many have some nasty secrets. And yet, the core of the people care and help each other. I guess that’s what contributes to such a tragedy.

It’s all a question of who the right person is to buy Selena’s Carson Creek Estate & Winery. Selena was passionate about her wines and the estate, lavishing care and thinking organically. Whoever takes it on must build a vine-by-vine relationship, just as Selena did.

The big question is, was someone trying to destroy Carson Creek and who murdered the vivacious Selena?

Darby Farr is a top realtor in San Diego. Miles Porter is a British investigative journalist with the Financial Times whom she’s been been dating and who is currently embedded in Afghanistan. Helen Near is a friend in Florida. Tina Ames is a friend in Maine who’s finally marrying her long-time boyfriend. Tokutaro Sugiyama had been her maternal grandfather and named as a war criminal for atrocities in WWII in China. Her parents, John and Jada, had gone out sailing one afternoon and the boat capsized.

Pacific Coast Realty belongs…
…to Darby, and she employs Enrique Tomas Gomez, a.k.a., ET or Rico, who is a friend and fellow realtor along with Claudia Jones.

Wyattville, Ventano Valley, Northern California
Selena “Leni” Thompson, who used to be an interior designer, is selling Carson Creek Estate & Winery, her pride and joy. Jasper is her independent cat. Rico and Carlos Gomez (he’s a photographer in San Francisco) are her interfering brothers. Their grandfather once worked in vineyards. Auntie Teresa and Juan, a cousin, are among the many relatives who come to the funeral.

Dan Stewart manages the vineyard and is recognized as one of the top winemakers in the valley; he used to manage Contento. Sophie “Sophie Doo” Stewart is his teenage daughter, interested in “skimpy scraps of fabric”. Poor boy, the teen years… Natalie is the wife and mother who died. Frances “Grammy” Kinney, who has run the family farm for years, can always be relied on. Jake is a friend of Dan’s and a fireman. Whitney is a friend of Sophie’s and fellow candy striper, and her mother is best friends with Margo.

Potential buyers for the vineyard include the wishful Dan; Vivian Allen, a financial analyst from back East; Fritz Kohler, who sold a successful bike company and invented Power Yoga with a TV show; possibly Veronica, who is a pop star who will be performing in the valley; and of course, the Contentos.

Contento Family Vineyards…
…neighbors Carson Creek and Andrea McDougal Contento is a friend of Selena’s and married to the much older Michael Contento, the grandson of the vineyard’s founder, Vincenzo. His brother David was the one who loved the vineyard.

Margo is Tim’s tigress of a twin who is an amazing organizer. Their son, Tim, and Christophe Barton manage the vineyard. Christophe says he’s more of an estate manager. Rolfe is the estate gardener.

Detective Nancy Nardone is investigating the sabotage and murder. Roger Sherman is a crime scene technician. Captain Montera is with the fire department in Wyattville.

The greedy Harrison Wainfield, a realtor who sees the Contentos as dangerous, has absolutely no tact. Ann Johnson is a realtor in Wyattville whom Wainfield totally disrespects. Toby Bliss owns the Blissful Grape. Cecilia is one of the worst waitresses in the world. Edward Martin is Selena’s attorney. Dr Jenna Yang is Selena’s primary doctor. Dr Beaumarron is an orthopedic surgeon. Rick Thompson is Selena’s abusive ex-husband. Horowitz is the principal of Valley High School. Alexander Remington is the chef-owner of Remy’s. The Mission Inn is also chef-owned. Sleepy Spaniel had been part of a deal on wine futures. Nichole Franchi had been an assistant winemaker with Black Stallion Winery. Dominc Deschaines is thinking of selling Deschaines Cellars.

Doug Henderson is Darby’s neighbor who loves to challenge her sense of taste and smell. He’s in love and packing up his possessions. Rhonda runs a small gift shop, Beachside Gifts, in Sunset Beach in Hawaii. Detective John Haina is a cop in Hawaii investigating the beating.

Eric Sanchez is a policeman to whom Darby sold a home. Kenji Miyazaki is the senior vice-president of Genkei Pharmaceuticals. Mr Kobayashi is its president.

The cover is dark as befits a wine cellar. At the very top a one-inch band of dark olive green provides the background for the author’s name in a pale orange with a thin band of burgundy separating it from the graphic that takes up most of the cover. On top of a banded wine barrel, a wine bottle stands with the series information in the same pale orange going up it from bottom to top, a corkscrew with cork lies on the barrel lid with a dark wineglass to the right, and a lit candle on the left. In the background is a barrel on its side with a skull and crossbones. In the one-and-a-half inches below this is the title on a burgundy background with the first word in black and the second in a brighter orange.

The title is a Deadly Offer on a highly coveted vineyard in Northern California with way too many buyers who were promised the property. 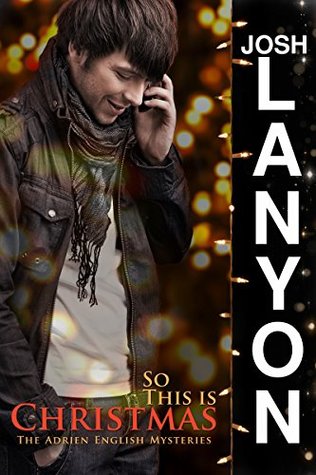