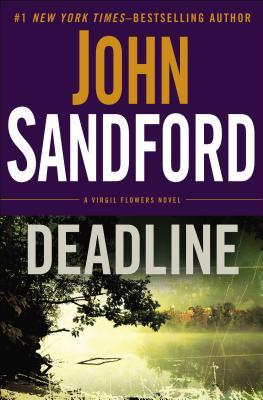 Eighth in the Virgil Flowers detective mystery series set in Minnesota and revolving around a Minnesota detective with a roving agenda. Deadline is concurrent with Field of Prey, 24.

Sandford cracked me up with the start of this when Johnson calls Virgil at 3 a.m. It only gets worse for Virgil when he shows up and finds a whole lot of gun-happy men forming a lynch mob. It’s a simple dognapping that ends up becoming quite the circus, one that the attorney general milks for months.

”’Virgil, this is serious shit. Somebody dognapped Winky’s black Labs. You gotta get your ass over here, man, while the trail is fresh.’

’Jesus, Johnson…dogs? You called me at three in the morning about dogs?’

’They’re family, man…you gotta do something.’”

Oh, boy. Some of those bumperstickers…although I did like the one that read “Point and Click…means you’re out of ammo.”

I think the bad guys have had it their own way for too long. They’re sloppy and talkin’ all the wrong things. It’s scary reading about these regular folks who are so comfortable with killing people.

I’m looking forward to more on Virgil and Frankie. He’s appreciating those finer points: his job not being a burden on her. One of the things I like about Virgil is his contentment. He’s found his happy place and isn’t ambitious to “rise” further in the ranks.

I like Shrake and Jenkins too. The snark they exchange with Virgil and their common interests in their approach to kicking back during a case, lol. That moment when Jenkins falls in the creek and Shrake is shouting “backstroke, backstroke”, LMAO.

I had to laugh about Will Bacon’s set-up as well. Very clever and a nice guy. Poor Johnson. He’s gonna need a new boat too. I think Larry Gale got his back. Oh, lord, the golf cart chase scene…*more laughing* Then there’s the dog. A dog that just keeps nodding along with everything Virgil says.

Yes, it is a serious story, but Sandford has upped the ante with his signature humor.

In Southeast Minnesota, down on the Mississippi, a school board meeting is coming to an end. The board chairman announces that the rest of the meeting will be closed, due to personnel issues. “Issues” is correct. The proposal up for a vote before them is whether to authorize the killing of a local reporter. The vote is four to one in favor.

Meanwhile, not far away, Virgil Flowers is helping out a friend by looking into a dognapping, which seems to be turning into something much bigger and uglier—a team of dognappers supplying medical labs—when he gets a call from Lucas Davenport. A murdered body has been found—and the victim is a local reporter.

Agent Virgil Flowers is the son of a minister with an interest in fishing and writing outdoor articles for magazines. He’s also fascinated by the mystery of crime and works for the BCA. Frankie Nobles is his current girlfriend (Storm Front, 7). Tall Bear is one of her sons; Tricia is his girlfriend. Sam is her youngest son (seven years old) and in the Boy Scouts. Johnson Johnson is his best friend and fishing buddy; he runs a specialty lumber mill. His girlfriend, Clarice, trains and endurance-races horses. Johnson’s friendly gesture is gonna cost him, lol.

The Bureau of Criminal Apprehension (BCA) is…
…a state policing agency, and Lucas Davenport is Virgil’s boss. Lucas’ boss is Rose Marie Roux, the commissioner of public safety. Shrake and Jenkins are BCA thugs whom Lucas sends out when anyone needs some muscle. They do enjoy their work…and their golf, lol. Beatrice Sawyer and Don Baldwin are the crime scene techs. Dave is an assistant attorney general.

’If you do that, you won’t be able to beat up people,’ Shrake said.

The Drug Enforcement Agency (DEA) has…
…worked with Virgil before in Dark of the Moon, 1. Harry Gomez is now working out of Chicago. His team includes George Blume, Jackson, Danny, Mike, and Raleigh. Gomez tells Virgil that Matt Travers says he’s still got a job for him, if he wants it.

Winky and Carol Butterfield own two Labradors; Dan Busch lost his beagles. Julius Ruff is a musician and plays with Dog Butt. McKinley “Muddy” is his talented and woods-smart son. Ralph Huntington might know where the dogs are. Virginia is a nit-picking librarian. Janice Anderson is a retired lady upset about what the school curriculum is coming to. Eddy is at Shanker’s, “just trying to be human”. Gary and Tammy Kochinowski own G&T’s, a bar on Main Street. Marvin Hiners is the bank manager; Carol David is a bank employee. Clancy Conley is the down-and-out investigative reporter who got messed up on speed. Now he works for the Trippton Republican-River, a small town weekly owned by Viking ”Vike” Laughton. Bill Don Fuller is Clancy’s landlord. Wendy McComb is a nice girl, even if she is a prostitute; she’s friendly with Clancy.

The Buchanan County Sheriff and Trippton PD are…
…the same thing. Jeff Purdy is the sheriff and doesn’t like Johnson. But he does like taking a complaint about Sidney Migg walking around naked in her backyard. Deputies include Paul Alewort, “Bongo” Boyce, and Josh Becker. Greg Jones is the assistant fire chief.

The Buchanan County school system
The Consolidated School Board consists of the chairwoman, Jennifer “One” Barns, and board members Jennifer “Two” Houser, Jennifer “Three” Gedney, Larry Parsons, and Delbert Cray while Bob Owens is the senior board member. Henry Hetfield is the superintendent of schools. Fred Masilla is the auditor. Benjamin Rogers is Masilla’s attorney. Randolph Kerns is the security officer for the school. Lanny Brooks at Brooks and Mann Automotive has a contract with the board. Jamie Nelson, Davey Page, and Cory are school bus drivers. Dick Brown is the motor pool supervisor. Will Bacon is the school janitor with a really nice set-up. Russell Ross runs a wholesale diesel business, TriPoint Fuel.

Roy Zorn, who used to ride with the Seed, a neo-Nazi motorcycle gang, has a nice little meth operation. Bunny Zorn is his wife and Ruff thinks she’s the brains of the outfit. Eddy and Dick are part of the meth operation. D Wayne Sharf is a dognapper partnered up with Judy Burk and her dog, Brutus. John owned the house D Wayne was using. Arnie Dillard owns the farm. The Minnesota Women’s Anti-Vivisection League, a.k.a., the Auntie Vivians, make a good showing. Then the Buchanan County Humane Society shows up to save the day.

Animal bunchers are guys who collect animals for laboratories. Syz is a carp fisherman from Chicago. Daisy Jones is a TV reporter out of the Twin Cities.

The cover has a solid deep purple upper half with the author’s name in an embossed gold and white, the series info appears in a very small gold font in the middle, and the bottom half is a “painting” from the shore of the Mississippi, looking back across at the forested skyline of Trippton.

The title covers so much ground. It’s a Deadline for dogs, reporters, and a more metaphorical action with a whole crowd.