Buy on Amazon|Buy on Audibles
Goodreads
Also in this series: A Man Lay Dead, Enter a Murderer, The Nursing Home Murder, Death in Ecstasy, Artists in Crime, Death in a White Tie, Overture to Death, Death at the Bar, Surfeit of Lampreys, Death and the Dancing Footman, Died in the Wool, Swing, Brother, Swing

Also by this author: Killer Dolphin, A Man Lay Dead, Enter a Murderer, The Nursing Home Murder, Death in Ecstasy, Artists in Crime, Death in a White Tie, Overture to Death, Death at the Bar, Surfeit of Lampreys, Death and the Dancing Footman, Died in the Wool, Swing, Brother, Swing

Twenty-third in the Inspector Roderick Alleyn cozy detective mystery series set in its contemporary period, the early 1960s, and revolving around the classy Alleyn and his painter wife, Troy. The setting in Dead Water is the island part of Portcarrow in Cornwall.

There’s debate amongst the citizens of Portcarrow as to whether the miracle is true or not with the majority looking at this phenomenon as the answer to their economic woes. I understand the villagers hopping on that band wagon, and I also understand Miss Pride’s abhorrence for the tacky commercialism of it.

There is a bit of hypocrisy in those who cry against it. They’re certainly not above making a bit of the ready. What’s sad is Wally being turned into such a parrot, as though that’s all he’s worth.

Marsh uses a global subjective third person point-of-view from the perspective of a number of characters in the story. Although this isn’t how we learn all these secrets!

Poor Miss Cost and her sex obsession. She certainly made a number of people uncomfortable. That said, there are a couple of romances in Dead Water, one with that sense of innocence to it and the other…very much not.

After all the current period mysteries I’ve been reading, it’s a hit upside the head to read Alleyn’s approach to detecting. He seems to let a lot of people get away with their belligerence, and yet he does get there in spite of them, lol.

All that investigating unveils characters within the village as well as Alleyn’s concern for his old French coach. Some of the reveals are a breath of fresh air, but many are not, hiding so many “sins”.

It’s rather sad about Miss Pride. I do understand her dislike of what’s happening, but she also needs to understand people wanting to survive.

Dead Water keeps things moving, primarily through Alleyn’s detective work, and while it’s not one of Marsh’s warmer stories, it is still a great read, and if you enjoy Agatha Christie, you’ll like Ngaio Marsh as well.

Miss Pride has too much pride to allow Portcarrow to continue this charade of miracle cures and intends to stop it, much to the horror of the villagers.

It becomes a war of sorts as unknown instigators warn Miss Pride away, leading to murder.

…It were the Green Lady what set it off.

The aristocratic Superintendent Roderick Alleyn is with Scotland Yard. His wife, Agatha Troy, is a well-known painter. They have a son.

…a fishing village with the island part of it owned by Mrs Fanny Winterbottom, the widow of a hairpin king, George Winterbottom. Her heir is her sister, Emily Pride, a highly acclaimed coach of French who had taught Alleyn back in the day.

Divisional HQ is…
…the local police for Portcarrow. Superintendent Alfred Coombe is in charge; he’s also the people’s warden at the local church. Police Sergeant George Pender has been asked to keep an eye on Miss Pride. Police Constables Pomeroy and Bill Carey are keeping watch.

The Boy-and-Lobster is…
…the local Jacobean pub run by the alcoholic Major Keith Barrimore. His wife, Margaret, is absolutely gorgeous. Patrick Ferrier is a student at Oxford and the major’s stepson. Jenny Williams, a New Zealander, is the temporary school-mistress, who will move on to a teaching job in Paris.

Miss Elspeth Cost runs a souvenir shop and the local exchange. Cissy Pollock is rather dim and helps out Miss Cost at her store. The widowed Dr Bob Maine runs the Portcarrow Convalescent Home and acts as the police surgeon. The Rev. Adrian Carstairs is the local rector; his wife, Dulcie, has a very nice manner. Ives Nankivell is the town butcher as well as the mayor. Mrs Bessy Trethaway is having twins. Mr Thomas is not doing well. Kenneth Joyce is a journalist for K.J.’s column with the London Sun.

Wally Trehern is not all there, has petit mal, and is picked on for his warty hands. His parents are deadbeats. The father, James, operates the local ferry.

The cover is in shades of turquoise, starting with the sky and then the angled rivulets lining the sides. A wind-blown banner in a pale turquoise spans the center with the author’s name in an Art Deco gradation of teals. Above the banner is the title with a sans-serif gradation in pale, pale blue to the deeper turquoise. Below the banner is a sky blue sky framed along the sides by green brush then black rocks with a white waterfall pooling at the bottom into a green surface ruffled with white. A blueish banner with that almost white turquoise text arches between the rivulets with the series information.

The title refers to how it ends, a Dead Water. 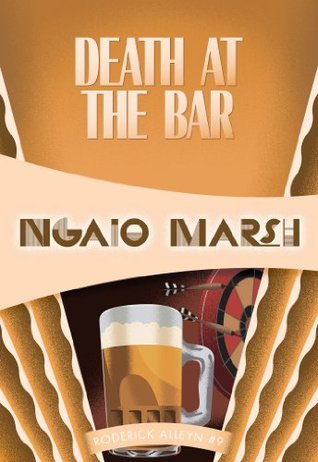 Book Review: Death at the Bar by Ngaio Marsh