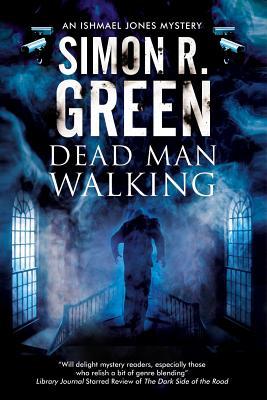 Second in the Ishamel Jones British spy mystery series and revolving around a marooned alien-turned-human spy. This story, a locked-room mystery, is set in a country house in the North Riding in Yorkshire.

I sure enjoyed reading Ishmael sidestep the new Colonel who is trying so hard to shove aside the deal Ishmael made with the Organization. Naturally, I also liked how much Ishmael enjoyed making the Colonel uncomfortable with Ishmael’s choices, *snicker* Our protagonists do employ a lot of snark, lol.

I do like Penny; she reminds me of Shotgun Suzie from Green’s Nightside and Molly Metcalf from his Secret Histories, confident and something of a loose cannon.

Now Ishmael, he’s a James Bond-like character whose mind we read thanks to Green using first person protagonist point-of-view. He reminds me of Jack Reacher with the same calculating mind, as he assesses situations and personalities. He’s such a cool customer; I could learn a lot from him on how to handle confrontational situations.

I do wish Green had increased the tension about what Parker knows…that Ishmael (and us) want to know. He raised the issues, but then left them. Well, okay, it’s probably better for my peace of mind that I’m not obsessing about it, but…ya know… As for the doctors, I couldn’t help but enjoy their comeuppance from their arrogant attitudes to the truths of their characters.

Parker does release the names of the last two Colonels: Oliver Cranleigh and James Belcourt, but only slips out teases of what else he know. It’s a sticky conundrum Green sets up, with all the inherent problems in determining if Parker really is Parker.

Using a variation on the flashing arrow plot beat, Green rode a fine line between how-can-they-not-question and how-the-heck in determining the truth behind these murders.

It comes across as a complex story, but in the end, it’s pretty simple with its theme of family wronged.

Frank Parker had been the best, the absolute best until he went rogue and worked for anyone who would pay him. Now he wants to come home.

In 1963, Ishmael Jones survived the crash of his spaceship and life on this planet partly through the transformations the damaged ship managed. Now he ensures his safety by spying for the British government. Penny Belcourt is his unofficial partner since events at Belcourt Manor in The Dark Side of the Road, 1; the one person Ishmael trusts to not stick a knife in his back.

…so secret that no one knows it exists, except for a very few. The new Colonel is much less accommodating and more starched-up than the last one. He acts as the point-of-contact for their agents.

Ringstone Lodge is…
…a country house in Yorkshire and notorious within the Organization, enough that it even frightens Ishmael. The former Regimental Sergeant Major, Donald MacKay, is head of security, retired from a Highland regiment. The belligerent Alan Baxter and Karl Redd are guards supplied by the Organization. The interrogators are the too-excited Dr. Alice Hayley and her submissive, more academic partner, Dr. Robert Doyle. Philip Martin is the resident technician, brilliant with computers, from the Ministry of Defense.

Frank Parker had been the blue-eyed boy given all the most important, dangerous cases. “Back in the day, you could frighten a whole room full of really bad people just by dropping his name.”

Hettie Longthorne was the Ringstone Witch buried in the family cemetery.

The cover is dark in blues and purple misting in a strange room with opposing arched windows, a pale blue light glowing from outside, on either side and a short railed staircase on both sides as well, with a headless man hanging in between. Security cameras frame the series information at the top and convey a sense of alertness, even as the text descends into a burnt white textured font for the author’s name with a simpler font used for the title immediately below.

The title is what they fear, a Dead Man Walking.