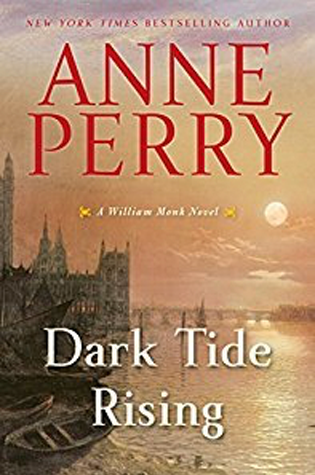 
Twenty-fourth in the William Monk historical mystery series revolving around a self-made man and his friends who have known each other for years. The story is set in the London of 1871.

It’s a tale of kidnapping and the the secrets of one’s past, as it explores man’s need to save his face.

Using third person dual point-of-view with the perspective switching back and forth between Monk and Hooper allows us to listen on on their worries, hopes, and fears. To learn more about their back history. And while the crisis is the ostensible tale, it’s Hooper’s back history that is on display here as well as the love he’s found. And it’s so much easier to demonstrate it for the reader when Hooper can provide his perspective.

It’s Monk’s own experience with loss and his realization over the years since he met and married Hester that enables him to empathize with what Harry Exeter is enduring. And it is a truth that we never know how we’ll react when it is one of our who is a hostage to fortune and love.

The tension really ramps up with the unknown betrayer and provides an excellent opportunity for Perry to dive into the individuals who make up Monk’s men. It’s the description of Celia and Kate’s friendship, “of sharing dreams that mattered, someone with whom you could laugh at the small things … someone who laughed with you and not at you” that eases that tension. And just enough that when the reality strikes of the loss, the loss becomes even greater.

It was bad enough being a woman in this time period and having Kate’s friendship must have helped Celia cope with the people who decried her for not following the “rules” and having a husband, money, etc. The ones who looked down upon her as an inferior person.

I do have a niggle about Monk’s reactions throughout, as I didn’t quite believe he could be that susceptible. That he wouldn’t question things more. I will say it was a merry chase, and I had no idea how he’d manage to prove the truth. Of course, it really was Hooper who got that ball rolling.

In all, Dark Tide Rising was an exciting tale that had me flipping pages, trying to figure out whodunnit!

Kate Exeter has been kidnapped, right from under her cousin’s nose. Her husband is frantic to get her back, doing everything he can to raise the ransom.

It’s William Monk and his men who escort the worried husband to the drop-off where the plan suddenly goes wrong. Monk knows he’s responsible for the operation, and yet, how could the kidnappers have known their plans? Unless it was one of his own men.

Tensions mount within the police station, as each wonders who they can trust. Then the case takes on a whole new meaning when a whistleblower waves proof of embezzlement.

The sometimes-too-proud William Monk is the commander of the Thames River Police, which he had joined in Dark Assassin, 15. Hester Monk had been a nurse in the Crimea and determined to change the world’s attitude toward women in the medical field. She runs a clinic in Portpool Lane. Scuff, who chooses to be called Will, had been a mudlark until Monk adopted him nine years ago. Now Scuff is apprenticed to Crow, a man who practices unlicensed medicine on the poor.

Sir Oliver Rathbone is an excellent defense lawyer and friends with Monk. Beata is his much-appreciated wife who’d been married to a violent, arrogant judge.

Wapping Police Station, Thames River Police
Monk’s men include Bathurst who comes from a large family, Marbury who is passionate about animals, Sergeant John Hooper who had been in the Merchant Navy for twenty years and is Monk’s second-in-command, the flippant Laker, the green Jones, and the stubborn, snappy Walcott with an ability for street fighting and who has a wife and son.

Clacton. Orme had also been a friend. Peter Ravenswood is the crown prosecutor and a friend of Rathbone’s, outside court.

Greenwich Police Station, Metropolitan Police
A rule clinger, Superintendent Runcorn is Monk’s former superior who became friend, then enemy, and then friend again. Sanders will see Monk home. Fisk had been in the Merchant Marines.

Harry Exeter is a land developer, and Kate is his second wife. Celia Darwin is Kate’s poorer cousin and will inherit a fortune if Kate dies before she turns thirty-three. Mary is Celia’s maid. The pompous Maurice Latham is another cousin and a lawyer who holds the trusteeship for Kate’s inheritance.

Nicholson’s Bank holds…
…Kate’s trust where Roger Doyle is the bank manager and one of her trustees. Bella Franken has been head bookkeeper for three years.

Albert Lister is one of the kidnappers. Jimmy Patch is one of Hooper’s informers. Jacob’s Island is a particularly nasty slum in London…where you can step into a mud puddle and disappear forever.

Major Carlton had suffered a terrible injury for which Hester had nursed him. Seems he keeps up with Hester’s activities and with anyone who matters to her. Betsy is a barmaid at a local public house. Squeaky Robinson is the bookkeeper at Hester’s clinic.

Twenty years ago…
…there was a mutiny on the Mary Grace commanded by Captain Ledburn. Jacob Abbott had been first mate. Joe Twist had been an ordinary seaman. Chester, the second mate, was keeping an eye on Ledburn for his father.

The cover is a peaceful scene looking down the softly golden river into a pinkish golden sunrise, water lapping at the small boats tied to the stairs, a bridge in the background, and a side view of parliament in deeper brown tones. An info blurb and the author’s name are at the top in red. Immediately below it is the series information in white bracketed by a yellow gold icon on either side. The title spans the building, boats, and river in the bottom quarter in white with a bit of shadowing

That Dark Tide Rising is one of suspicion and betrayals.