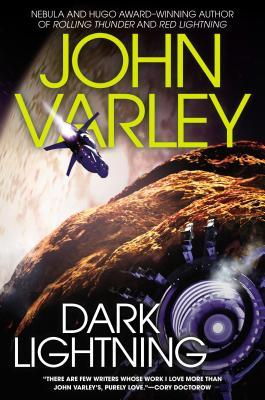 
Fourth in the Thunder and Lightning young adult science fiction series and revolving around the twins: Cassie and Polly Broussard.

It’s an adventure with scary overtones. Mutiny is never a good thing. And it all revolves around Jubal’s fear of something terrible happening. It’s a fear that is explored throughout and is the primary conflict in the story. However, the premise for the mutiny seems thin. Why would an old friend react like this? He’s supposed to be smart. Why not talk to Travis? Wait for Jubal to finish his thinking? All I can say is, it’s a good thing that the Broussards are so paranoid. Although it turns out that they’re not paranoid enough.

The prologue was irritating. Oh, not at first. Later, when Varley repeats it all. What was the point of having a prologue at all?

Varley did pull me in with that skypool incident with Polly falling out of the sky and landing in that pigsty, *laughing*.

I’m of two minds about the BLINKLINK (sounds like those Google glasses). Varley sometimes uses it as an info dump, and other times, he uses it as part of the communication channels for the inhabitants of Rolling Thunder. It’s almost as if Varley didn’t get on his roll until later, and I wish he’d gone back and cleaned up those info dumps.

Okay. Whine over. I do adore the thought Varley has put into Rolling Thunder. Wow. It’s laid out like a planet with varying land “masses”, rivers, villages, newspapers, etc. I love the sound of food delivery and the dishwashing set-up. I want this! Travis buying up all these buildings; the names he bestows on the villages (Grover’s Mill, Grand Fenwick, etc.); the supplies he’s laid on; the humongous variety of equipment, foodstuffs, and animals; the transportation options — lucky for them that Jubal invented the black bubbles. Think Noah on steroids.

I also like the bayou “camouflage” on the Broussard homestead and its location on the river. And I’m jealous (too) of that treehouse! It truly is amazing how homey the interior of Rolling Thunder is. It’s worth reading if only for that!

The tragedy of Jubal’s childhood simply reinforces my wish that parents had to be licensed. He’s such a great guy, and you can’t help but wonder what wonders he’d have achieved if he hadn’t suffered all that brain damage. Then again, as Varley notes, it might be that brain damage that allows him to make those leaps of intuition. Uncle Travis is a pretty easygoing guy and willing to allow a lot of leeway, er, democracy, until he disagrees. Fortunately, he doesn’t disagree often.

The twins are assertive, forward, loyal, caring, and intelligent even if they don’t apply it to schoolwork. As for Patrick, I did wonder about him and his reluctance to do anything during the mutiny.

On the negative side (I do hate science *wry grin*) is all the physics in Dark Lightning. It is easy enough to leap over, though. Part of my frustration could well have been that it’s been too long since I read the first three in the Thunder and Lightning series.

Events do help Cassie make up her mind about what she wants to do with her life. And Jubal’s last invention in Rolling Thunder opens up a ton of possibilities. I hate that I’ll have to wait a few more years for #5, for I do love this series. It’s a group of stories that sticks in my mind and pops up every so often, making me want to re-read it.

Coming out of stasis, Jubal cried out “The ship must stop, or everyone will die.” One sentence that sets fear and mutiny in motion.

Cassie and Polly Broussard are twins whose father is Jubal, the eccentric, brain-damaged, and brilliant inventor with a lot of phobias. Their mother is Podkayne (I know, she’s even from Mars! Her story is in Rolling Thunder, 3) and a very famous singer. The captain of the ship, sorry, the Supreme Exalted Admiral, is Travis Broussard, their uncle.

The extended family are the Broussard-Strickland-Garcia-Redmonds and includes…
…Podkayne’s parents, Ramon “Ray” and Evangeline Garcia-Strickland. Great-aunt Elizabeth Strickland-Garcia is a nanosurgeon with one prosthetic hand that is so much better than a real hand. She’s married to Dorothy, a psychiatrist; they live in Bedford Falls. Great-grand-père Jim Redmond runs the best Martian restaurant on the ship; his wife is Great-grand-mère Audrey. Great-grand-père Manny and Great-grand-mère Kelly Garcia are in stasis at the moment. Uncle Mike (Podkayne’s brother is an achrondroplastic dwarf adopted by Ray and Evangeline) and Aunt Marlee (she’s an artist) have a son, Patrick, who the first real problem between Polly and Cassie. Patrick and his family live at Fantasyland, the ship’s theme park; Mike manages the casino for the ship. Natalie Broussard is a third cousin.

The Nguyens are the farming couple raising the pigs. Lori is standing a watch on the bridge. Rachel Waters. Katy is a ten-year-old assistant at one of the meetings. Fiona Kelly is the head newsreader for RTBS. Some of the politicians include Governor Wang; George Bull is the mayor of Freedonia Township; Mayor Oringo Ngoro of Sweet Apple (he raises 50-some varieties of apples and is the chief ecologist); and, “Uncle” Max Karpinski, the fattest and second smartest man on the ship, is the Chief Relativist.

Skypool is…
…a full-contact sport played on bicycle-like contraptions that include wings, since it’s played in the air. Fortunately, parts of Rolling Thunder have differing gee levels. The twins play for the Bayouville Gators, and the story opens with their playing the Hilltown Hillbillies. Cheryl Chang is the Hillbilly defense, the intimidator; Woody is her younger brother. Mazzie Niven, Violet Silversteen, and Suki Kurosawa are fellow Hillbilly team members. Gator team members include Pippa Mendez and Jynx Molloy who are good friends with Polly and Cassie and PJ Leaping Deer while Milton Kaslov, the bright but socially clueless one: “talking to Milt for ten minutes made you have thoughts of suicide”, is on the boys’ team. The Gators’ intimidating coach is Peggy who is absolutely deadly with martial arts.

The mutineers include…
…Elton, Roger, and Lieutenant Vince from the Castle Rock police force.

The ship, Rolling Thunder, is…
…a hollowed out asteroid that’s been on its way to New Sun for the past twenty years with some 20,000 awake inhabitants who are spread all over the inside with some 1,350 people per town. There are a ton more in stasis. Sheila is the AI that controls Travis’ personal ship. Colonel Jane Litchfield leads the security team that’s in stasis.

Black bubbles, a.k.a., stasis bubbles, are like suspended animation. You can be inside one for years, decades, and come out without having aged or aware of the time that’s passed. Skippers are the people who choose to go into a black bubble and skip over real time. FOCTs are Family of Captain Travis, and it has its privileges. The Mejd Allah was the only ship that returned (Red Lightning, 2); it destroyed a large chunk of earth when it came back. Boudreaux is one of the few koi with a name.

The cover is dark browns and deep purple with an exterior space view of Rolling Thunder‘s secret dock. It’s the captain’s ship thrusting in. The author’s name is large, at the top, and in lime green. The title is much smaller, at the bottom, and in white.

The title is what Jubal fears, Dark Lightning.