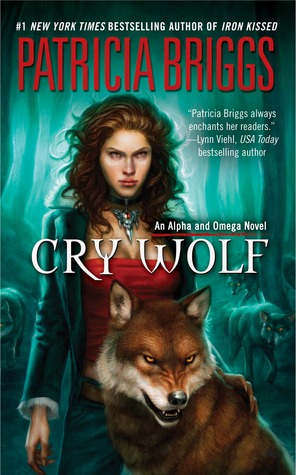 Buy on Amazon
Goodreads
Also in this series: Wild Sign

Anna never knew werewolves existed, until the night she survived a violent attack... and became one herself. After three years at the bottom of the pack, she'd learned to keep her head down and never, ever trust dominant males. Then Charles Cornick, the enforcer—and son—of the leader of the North American werewolves, came into her life.

Charles insists that not only is Anna his mate, but she is also a rare and valued Omega wolf. And it is Anna's inner strength and calming presence that will prove invaluable as she and Charles go on the hunt in search of a rogue werewolf—a creature bound in magic so dark that it could threaten all of the pack.

First in the Alpha & Omega urban fantasy series (second in the overall Mercyverse) and revolving around the wolf pack in Montana. The couple focus is on Anna and Charles.

This story carries on directly after On the Prowl: “Alpha & Omega”, 0.5 (Mercyverse, 1.1), which I seriously recommend that you read first.

In 2008, Cry Wolf won the P.E.A.R.L. (Paranormal Excellence Award for Romantic Literature) award, and in 2009, it won the DABWAHA Romance Tournament for Best Paranormal/Urban Fantasy/SF Romance.

I adore Patricia Briggs’ work!! She’s taken an interesting twist on the werewolf trope and includes a great cast of characters with a tremendous amount of back history while Anna gets an introduction to how a pack really works..

It’ll be a hunt: one for a killer and one for trust, confidence. A tale of confidence-building and an unusual courtship as Charles works to gain Anna’s trust and love while Anna struggles to find self-worth. And again Briggs twists this with Anna’s being an Omega wolf who discovers her inner stubbornness as she stands up to other wolves. It’s a beautiful evolution that heartens.

I do love Anna’s assessment of Charles:

Yes, Briggs pulls in the insta-love but only as a glancing tap. It’s Charles and Brother Wolf who are dumbstruck with want while Anna is attracted, doesn’t know why, and shies away (or is it recoiling in distrust?) from the whole idea.

It’s such a dichotomy. Bran is characterized as a powerhouse, capable of cowing any wolf, and he looks “like a college student, a computer geek, or maybe an art major”. It’s a concept that throws me off, and I find myself wishing I could see him for real. I know, how unreal a thought is that!? Then there’s Charles. A man/wolf whom everyone but his father and brother fears. It’s what makes his changes so fascinating to read.

I love how angry Bran and Charles are in this. The lengths to which they go to ensure Anna’s safety. Well, Charles does have an extra incentive in this, and it is funny how possessive he is about this new mate who is quite unsure about the whole situation. And I adore how Charles reacts to Anna. How protective, worried, and gone he is, *laughing softly*. He’s also worried how Anna will react when she’s exposed to one of his duties for his father. It’s this bit that felt overdone and annoying.

“Charles was amused to find he preferred the pink because she had put it on him.”

The werewolves have not yet come out of the closet, but Bran is planning to do it soon, which creates a nasty PR problem.

I love how Briggs introduces the pack. No info dumps, but a series of show scenes that explain how the pack operates, the rules, the consequences, and introduces the core characters. It’s a be-yoo-ti-ful example for writers on providing background data that fills the reader in on the story universe.

Whew, that scene with Leah was i-n-t-e-n-s-e. What. A. Bitch! Ya can’t help wondering why Bran ever married her, an explanation that occurs at the end and will wring your heart.

What can I say? If you like werewolf stories, you do not want to miss the combined Mercyverse!

Anna never knew werewolves existed, until the night she survived a violent attack…and became one herself. After three years at the bottom of the pack, she’d learned to keep her head down and never, ever trust dominant males. Then Charles Cornick, the enforcer — and son — of the leader of the North American werewolves, came into her life.

Charles insists that not only is Anna his mate, but she is also a rare and valued Omega wolf. And it is Anna’s inner strength and calming presence that will prove invaluable as she and Charles go on the hunt in search of a rogue werewolf — a creature bound in magic so dark that it could threaten all of the pack.

The two-hundred-some year-old born-werewolf, Charles Cornick, is half-Salish through his mother, Blue Jay Woman, and serves as the pack’s investment advisor and his father’s Enforcer. Brother Wolf is Charles’ other half, and they work together, using each other’s skills to achieve their goal.

The rest of the Aspen Creek pack in Montana
Bran Cornick is the leader of the North American werewolves to whom all the Alphas answer — and Charles’ father. Samuel is his other son, a medical doctor, who is hundreds of years older than Charles and suicidal. Bran sent him to Mercy (Moon Called, 1) in hopes of shaking him out of his depression. Leah is the Marrok’s mate. Her nature and attitude provide an alternate look-in at the negative effects of the mating bond.

Aspen Creek is also a sanctuary for wolves on the edge, including Hussan, Asil “The Moor”, who wants to die. He has lived too long — 1,300 years — and doesn’t trust his ability to control himself. He maintains some control by cultivating his roses. His mate, another Omega, Sarai, was murdered a few hundred years ago. Linnea is the witch who promised to teach Mariposa.

Dr. Carter Wallace had been a human veterinarian in Aspen Creek and Bran’s friend. Gerry had been Carter’s son (his betrayal and fate are revealed in Moon Called). Shawna Carter is Carter’s angry granddaughter. Henry Carter had been Carter’s father and a werewolf.

Sage Carhardt is a sweet woman, er, werewolf, who had been brutalized. Hank is the Montana pack’s human pilot. Reverend Mitchell led the funeral service. Heather Morrell is a human who was raised in Aspen Creek and works for the Forest Service. Her uncle, Colin Taggart, is also a ranger and a werewolf. Jack, a former policeman, is one of Heather’s coworkers who saw too much.

The Tri-Cities in Washington state is…
…where Mercy Thompson, a coyote shifter, lives, and Adam Hauptman is the Columbia Basin Pack Alpha. A nice bit of tension there, lol.

Walter Rice is a former veteran of black ops who atones by living as a hermit in the wilderness in northwestern Montana. Jimmy had been a teammate in Vietnam.

The Western Suburb Chicago Pack was…
…sick for a very long time. Boyd Hamilton is the new Alpha now that Leo is dead. Isabella was Leo’s mate. Members of the pack include George and Joshua who were inclined Leo’s way while Thomas, a submissive wolf, will drive Anna’s things to Montana. Rashid is a doctor.

Mick was Anna’s boss at Scorci’s, a Chicago restaurant. Kara lives in the same building as Anna and is a good neighbor and friend. The Torvalis bloodline had interbred with gypsies and was the only Western European line of witches to survive the Inquisition.

Mary Alvarado, a.k.a., Mariposa, is a witch, a dark witch hunting Asil.

An Omega wolf is born that way and is outside the pack hierarchy with “all the protective instincts of an Alpha and none of the violent tendencies”; a wolf’s instinct normally leads him (or her) to protect an Omega at all costs. A submissive wolf doesn’t feel the need to fight and can be trusted. An Alpha draws on pack magic to give himself an edge in speed or quicker healing, lets him control his wolves or find them, or feeds off their rage. Guardians are the result of a witch torturing a human to death; one witch family in Europe had held the spell that made it possible close to their black hearts.

The cover makes me think “graphic novel” with its comics-like Anna in a short black jacket over her red bandeau top and jeans and a snarling Charles in his wolf guise. Behind them is a range of fluorescent greens creating an eerie background of swaying tree trunks and stalking wolves.

I think the title reflects the emotions of a number of the characters with Cry Wolf expressing Bran’s and Asil’s grief and Anna’s and Charles’ fears and hopes.