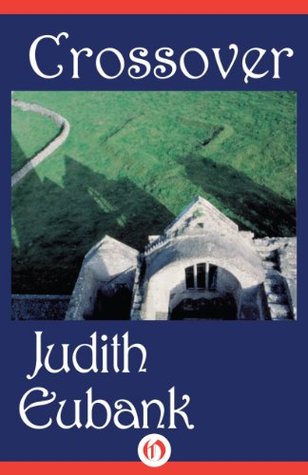 Beauty, romance, suspense: Judith Eubanks handles a timeless mystery with a light, sure touch. Crossover evokes the brooding atmospheres of Daphne du Maurier with the wit, intelligence, and sensibility of Dorothy Sayers.

As she adapts to British university life, Meredith Blake, a young American scholar, discovers that Edwards Hall is not the same for her as it is for the others. For her, it is full of riddles and reminders of the Victorian family that had once lived there and the tragedy that overtook them.

Intrigued by the mystery hidden in the Hall's past, Meredith begins to explore the manor house and becomes increasingly challenged baffled, and threatened by what she finds there. Something has singled her out, slowly isolating her from the twentieth-century world she knows.

A time travel mystery set in Devonshire, England, and revolving around Meredith Blake and her 19th century twin.

My thanks to NetGalley and Carroll & Graf Publishers for providing this ARC for my enjoyment.

My Take
The description compares Crossover to Daphne du Maurier, but I certainly contest comparing it to Dorothy Sayers. While I did enjoy the witty, lively interactions with Tony and with Peter, they were more like islands within unconnected and shallow scenes.

From the very start, Eubank has me asking questions as to why. Why do these two women insist on going through the door at the same time the gardener is trying to haul their luggage through it? And she calls him rude! And the idiocy of this action is typical of the disconnects throughout.

If anyone can explain the Little Dorrit joke, I’d appreciate it.

I wish Eubank had built the romance up instead of simply plunging us into it. It moves from deprecating the scandal from last term involving Graham and Meredith’s predecessor — Kimberly Hays — and Meredith refusing to succumb to find her immediately succumbing, and we never learn why. After all her protesting, there’s nothing about why she’s suddenly all over him. To be fair, Meredith does doubt he can deliver an interesting lecture.

She slides right into time traveling, an activity most people would consider unbelievable without really questioning how it could be possible — psst, I think Eubank slipped Meredith a copy of the manuscript so she’d know what was coming… As for the ease with which Peter accepts the news…oh, brother.

For such a determined woman, she gets distracted very easily nor does Eubank build any reason into the why of it. There’s a quick dip into possible insanity, but it goes nowhere. The bit about ley lines is interesting, and it’s a pretty image Eubank builds at the end, a-n-d she doesn’t go anywhere with this. Again. Oh, there’s a nice bit of history and chit-chat about them as she confirms that the stone wall is on a ley line, but is all this talk only to confirm this? I’m not sure if Eubank is setting the scene for book 2 or was simply padding this story out.

Eubank goes on about the Thorntons missing for a length of time, but, again, goes nowhere with it. As for it being “pretty clear that” Meredith has to leave school or investigate the path. Huh? How does that compute? She’s popping in and out of time, she’s supposed to be a scholar, so why doesn’t she determine what the circumstances are that send her back in time so she can avoid them if she desires?

Eubank leaps to conclusions like a deer at the sound of a rifle going off. Whatever led her to think that Giles would know anything? Sure there’s a Ben Martin mentioned in the older scenario and there are Martins around now, that doesn’t mean Giles knows about time travel? It does mean the Martin family has lived in the area for a good long time. I mean, yeah, later we find out he does, but what makes Meredith believe he does before this? I swear to God, Eubank gave Meredith a cheatsheet.

It is an interesting and easy way to time travel. And Eubank did create a nice bit of suspense in Henslowe’s culpability with Thornton. That bit of back history on the Thorntons’ romance helps create suspicions. Nor do I like his temper and quick fists, although he does appear to have been industrious.

I very much enjoyed her descriptions. They were nicely rich with a good bit of show.

Peter is certainly supportive, and he must be psychic! He knows Meredith’s current predicament will be resolved in two weeks. Maybe he peeked at the manuscript as well…

“‘In fact, no one touches my books but me. Do you know why?’

‘Of course. The little slips of paper might fall out.’

If Henslowe has been with the household for more than a month, I should expect she’d already know the household walked to church every Sunday. So why does Mrs. Nash feel compelled to explain it to “Henslowe”?

It almost sounds as if Giles is in love with Miss Henslowe, but then we learn he has a girlfriend.

The sisters are quite the pair; you’ll crack up at their scheming.

Through Meredith, Eubank makes an excellent point about the constriction of clothing for women and their inability to react to violence in the nineteenth century …and that there wasn’t much difference for Meredith in her time.

I can’t believe it’s taken this long for Meredith, ahem, to pick up on the fact that Henslowe is alike enough to her to be her twin and what that might mean for the timeline.

The Story
Meredith is determined to gain her degree here in England, and nothing will get in her way.

Except those inadvertent trips back in time that expose her to an unhappy family. One crumbling before her eyes.

Dr. Peter Graham, an Oxford man, will be Meredith’s tutor; he’s got a bit of a reputation. His field is Victorian fiction. He has a younger sister, Elizabeth, reading mathematics at Cambridge. His parents are in the foreign service.

At Edwards Hall, a redbrick university
Edwards Hall is located in England and is part of Exeter, a redbrick university. Fellow students include the Kiwi, Susan Franklin who’s aiming for French; Imogen Shepherd; Hilary Jamison is a fresher; Gillian is the snotty bicycle rider; Alice is the stunning redhead; Marian is a dedicated Marxist; and, Tony Moffat, an Australian, has a great, and malicious, sense of humor.

Dr. Young is the Warden, I’m thinking a warden is similar to a college’s headmistress or principal. Giles Martin is the gardener and man of talents who will be handing in his notice. He’s also had some unexpected experiences as a lad. His father runs a pub in Exeter. James Stoddard is Tony’s tutor; he’s fascinated by ley lines. Hermione is Stoddard’s cat. Dr. Ramsey is a behaviorist.

The Reverend Mr. Nicholas Creel is the rector at St. Dunstan’s Church. He has a friend, Dr. Dudley, who can lend a hand, or rather a couple of names: Miss Grace Redding and Mrs. Sophy Neville. They’re a pair of rogues!

The nineteenth century characters
The house is not called Edwards but Upper Durward and is part of Charles Thornton‘s Devonshire estate. He’s also the husband in love with the governess while Isabel Dobbs is his fragile wife. Nora Henslowe is the latest governess, and she’s been brilliant with Katherine, their remaining daughter after the son, Arthur, died. Mrs. Mainwaring is a friend of Mrs. Thornton’s. Mrs. Augustus Redding is another old friend of Mrs. Thornton’s and one of Katherine’s godparents.

Ben Martin is part of the staff. Mrs. Nashe is the housekeeper. Dr. Wylie treats Henslowe/Blake. Agnes is one of the maids. Old Weems is the gamekeeper. Jeffreys has been Mrs. Thornton’s dresser since she was a bride. Mr. Emory is the butler. Tom is the footman.

The Cover
The cover begins at top and bottom with a narrow band of red with a much wider band of a deep royal blue. The graphic in the middle is an overhead view of Edwards Hall, with, I’m guessing, a collage of of ruin and stone wall in a grassy field — I suspect it’s meant to represent the ley line crossovers.

The title tells us what happens, it’s a Crossover that puts Meredith in danger.