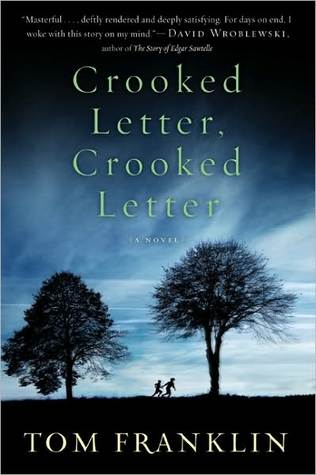 
A standalone mystery-thriller that will keep you on your toes with your heart in pieces in this psychologically wrenching story set in the Mississippi of the late 1970s, to which I’d give a “7” if the rating system allowed it.

In 2011, Crooked Letter, Crooked Letter won the CWA Gold Dagger Award and the Alabama Author Award for Fiction and was nominated for three different awards for Best Novel: the Barry Award, the Anthony Award, and the Edgar Award. In 2010, it won the Romantic Times Reviewers’ Choice Award for Best Contemporary Mystery, the Los Angeles Times Book Prize for Mystery/Thriller, and the Willie Morris Award. It was nominated for the Hammett Prize.

It’s a “fascinating” look at Mississippi in the 1970s and the racism that flourishes. It could be thirty years back before Civil Rights with the attitudes people have. Sure, black and white kids go to the same school. I’m sure they use the same bathrooms and drink out of the same bubblers. But get out of a white man’s truck? Be seen with a black girl? Heck, walk next to one?? No.

And it’s a two-sided racism perpetuated by the adults.

There are two sides to this story…maybe that’s what led to the title being repeated?? We hear Larry’s thoughts as he lives from day to day, then Franklin switches to Silas as we hear his thoughts which provide the foreshadowing (and there is a LOT of foreshadowing!), his regrets, his angers.

Franklin’s story slips back and forth bet ween Larry and Silas, using a third-person dual point-of-view, but also between now and twenty-five years ago. No, it’s easy enough to follow. My only regret is how impatient I was to find out what really happened.

Larry only knows the one side of the controversy Silas and his mother’s presence causes, and it’s sad, especially as you read of their friendship. How much more it could have been for both boys.

That Franklin hints his little heart out, and there are truths you don’t want to hear but know to be true. A hateful tale of bigotry that knows not racial lines and leaps to judgment with a law that isn’t that concerned with the truth or true justice.

It won’t matter what he’s done, you can’t help but feel for Larry, the ostracism, the hate directed at him more than twenty years later. He’s such a lonely boy, despised by his peers, and yes, his later ostracism is simply a continuance of his youthful experience. Jeez, kids are cruel and so are those adults who ought to know better! That poor boy was so desperate to fit in, to be accepted.

It’s Wallace’s visits that make Larry realize how hungry he was for friendship, and Franklin uses his mother’s participation in religious fasting as a metaphor.

I get that Silas was destroyed by Larry’s comment, but he did help, unknowingly, set up the scenario. And when you see what Silas does to Larry over the years…geez…Larry did NOT deserve this. Nor what came later. And as much as I like Silas, he’s also a shit. About Larry, about letting those sleeping dogs lie, about how he treated his mother.

The dialect is amazing. You want a good example of how to write dialect without resorting to respelling words? Read Crooked Letter, Crooked Letter for Franklin’s use of syntax.

That ending was unexpected, so much more hopeful than I had thought it would be. Thank god.

Something to consider “how time packs new years over the old ones, but how those old years are still in there, like the earliest, tightest rings centering a tree, the most hidden, enclosed in darkness and shielded from weather. But then a saw screams in and the tree topples and the circles are stricken by the sun and the sap glistens and the stump is laid open for the world to see.”

The fear is a repeat of the girl who went missing twenty-five years ago. Tina Rutherford has been missing for eight days now, and the whole county knows that it’s Scary Larry Ott.

Ostracized by all and faithful to his parents, Larry survives day by day through his books. Until one day he doesn’t.

Constable Silas “32” Jones is a black cop and the sole law enforcement of Chabot, Mississippi. Back in the day, he’d been a hotshot pitcher in college at Ole Miss. Alice Jones had been his mother.

Angie Baker is an EMT and Silas’ girlfriend. Tab Johnson, an old hippie, is her driver. Voncille Bradford, the town clerk, is City Hall in Chabot. Chief Inspector Roy French, a Vietnam vet, had been a game warden. Skip Holliday is one of the deputies. Sheriff Jack Lolly didn’t need proof then and still doesn’t. Deputy Parvin is hauling the snakes around with him.

Jon Davidson is a volunteer at the information desk at the hospital. Marlon is another volunteer. Dr. Dan Milton performed the surgery. Dr. Israel works ER.

The “too-busy” Brenda works River Acres, the nursing home. Doris is but one of the many fellow patients who keep Ina company. Clyde is an orderly.

The Hub is a diner/convenience store run by the goodhearted Marla. Shaniqua works as a waitress. The Chabot Bus is a converted schoolbus where Chip works as a bartender. Shannon Knight is a police reporter. Morris Sheffield is the part-time mayor. Olivia is the postperson with a snake problem. Irina Mott lives with two other divorced ladies: Evelyn and Marsha. Sellars and Edward Reese are some of the neighbor kids. Wallace Stringfellow likes to drink and toke. John Wayne Gacy is his nasty pit bull. Evelyn is his on-again, off-again girlfriend. Wanda is another girl he visits. Jonas is his mama’s boyfriend. Charles Deacon is a suspect in M&M’s murder.

The Rutherford family owns the lumber mill and thousands of acres for timber farming. Tina Rutherford is their 19-year-old daughter headed back to college.

Twenty-five years ago
Cindy Walker was Larry’s nubile neighbor with a timid mother, Miss Sheila who works at the tie factory, and a hateful, supposedly disabled stepfather, Cecil. Tammy is Cindy’s friend.

Oliver was Alice Jones’ boyfriend in Chicago. Charles is the kind bus driver. Clara works at the bus station.

The cover is dark with a storm threatening in that dark, dark sky at the top that descends into a blue sea of clouds above a silhouetted landscape with two boys running between two trees. A testimonial is at the very top in white while the title is in a lime green centered in the top half of the cover. The author’s name is in a pale yellow at the bottom.

I haven’t a clue where the title came from, although I get the impression that Crooked Letter, Crooked Letter is supposed to refer to the town???