Buy on Amazon|Buy on Audibles
Goodreads
Also by this author: The Painted Queen, The Curse of the Pharaohs, The Mummy Case

First in the Amelia Peabody amateur sleuth mystery, historical series starting in Egypt in 1884 and revolving around Amelia Peabody, a know-it-all who actually does know quite a bit.

Amelia is too funny for words. She’s so self-righteous. Knows she’s always in the right and, very nicely, rides roughshod over everyone in her path.

Peters immediately sets up Amelia’s personality; she’s a woman who does not take anyone’s guff, lol, and she is quite honest in her self-assessment — most of the time. She’s a total anomaly when it comes to how society expects a woman to act. Ya gotta love her brashness, lol.

This bossy mama type isn’t afraid to let everyone know it. I can see her point about sanitation, etc., in Egypt at that time, and it does bring it home how very judgmental the West is. She’s also quite a Christian woman, and I mean that in the true sense of the word.

“. . . although, to my regret, I was not called upon to amputate anything.”

That strength of hers comes in very handy when her brothers — and the rest of the world — discover the size of the fortune she inherits. Jerks.

Peters does a nice job of including historical events in Crocodile on the Sandbank, from the Mahdi and Gordon at Khartoum, Sir Garnet Wolseley rushing to Gordon’s relief, Petrie, Sir Evelyn Baring, Herr Lepsius, Pharaoh Akhenaten, H. Rider Haggard, and more.

The melodramatic Lucas sure is hot for Evelyn. The other marriage proposal? Only Peabody and

Peters appears to know her stuff when it comes to archaeology, and she pulls us into this world, as well as the world of pulp adventure. A mummy that threatens and kidnaps, an agitator stirring up the villagers, sleeping in tombs, and a forbidden (in her eyes) romance. Oo-oooh. Oh, yeah. It’s the Wild West out there!

It’s all seen through first person protagonist point-of-view from Peabody’s perspective, so naturally everyone is judged by her standards.

Peabody and Emerson have an adversarial relationship with each spouting negative opinions of the other and of their opposite sex. Additional contrast is in their approach to life. Emerson is content to rough it. Peabody prefers a proper table and chairs . . . and a good cook.

It’s fun, fast-paced, and I love that both Emerson and Peabody see no difference between an Englishman and an Egyptian.

If you love snark, you are gonna love Peabody and Emerson, lol.

It’s the discovery of the mummy that terrifies the villagers, and Emerson and Peabody are up to their necks in trying to prove that it’s a trick.

Amelia “Sitt Hakim” Peabody is a spinster having spent her life caring for her father, a scholar and antiquarian. The youngest of six, the pragmatic Peabody has an aptitude for languages. Miss Pritchett is to be Peabody’s companion on her travels. Travers is Peabody’s snarky maid.

The sweet, honorable, and talented Evelyn Barton-Forbes is the granddaughter of the Earl of Ellesmere. The earl’s heir is Lucas Hayes whose mother, Grandfather’s eldest daughter ran off with an Italian, Conte d’Imbroglio d’Annunciata. Wilfred is their second cousin. Aunt Marian is quite stubborn. Young Peter Forbes was nagged into action by his mother. Alberto is the drawing master who eloped with Evelyn. Alberto’s cousin is Luigi.

Radcliffe Emerson is an archeologist with a great many strong opinions and little money. Walter is his gentler brother and an expert on ancient language. Together, they are excavating Khuenaten‘s, a.k.a. Akhenaten, tomb. Abdullah is the foreman of the dig with whom the Emersons have worked before. Mohammed is the son of the mayor of Haggi Qandil and a rabblerouser.

Cairo
Michael Bedawee, a Copt, is hired as Peabody’s dragoman. The captain of the Philae is Reis Hassan. Habib and Abdul are waiters aboard ship. Lucas has hired the Cleopatra.

M. Maspero is the French director of antiquities. M. Mariette had been Maspero’s predecessor while M. Grebaut will succeed Maspero. Herr Emil Brugsch is Maspero’s assistant. Brugsch’s brother, Heinrich, is a respectable, well-known scholar. Sir Evelyn Baring is the consul general and British agent who had been a friend of Peabody’s father. Wilbour is called “Father of the Beard” for his magnificent white beard. Frank Griffith is with Petrie at Naucratis.

Abd er-Rasool Ahmed is a shifty character in Gurnah. He and his family are tomb robbers.

Mr Hodgkins had been the butcher. Mr Fletcher is Peabody’s father’s lawyer.

The cover has a touch of the Art Nouveau about it with those long lines. Either side of the cover begins with a narrow, vertical band of alternating horizontal stripes of purple and orange. The center has a black background that starts at the top with a white testimonial and a bolder info blurb below it. The author’s name is in a stylized Nouveau font in gold. Immediately below it is a golden band with pointed sides and the series info on it in black. Immediately below this is a sand dune in front of two pyramids with the back end of a crocodile slithering over the sandbank leaving a pith helmet behind. The image is narrower than the central background and is outlined in gold. The title, in white, is set in the sunset of a purple sky.

The title references the poem with the Crocodile on the Sandbank. 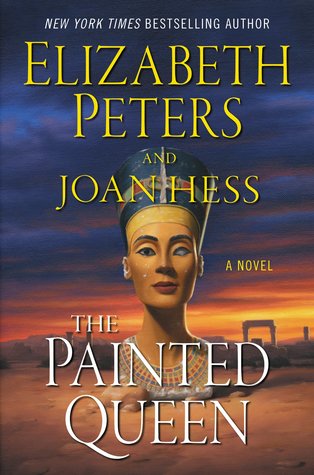 2 responses to “Book Review: Crocodile on the Sandbank by Elizabeth Peters”