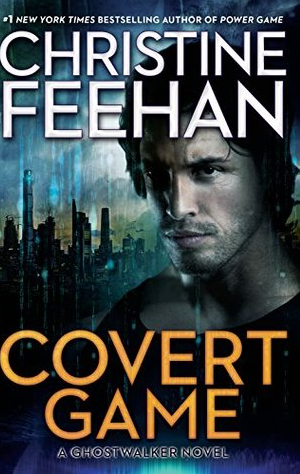 Fourteenth in the GhostWalker paranormal romance-science fiction series revolving around the psychic supersoldier team based in the Louisiana bayou. The couple focus is on the dominant Gino Mazza and the submissive Dr Zara Hightower.

I do enjoy Feehan’s premise of the GhostWalkers, the supersoldier special ops teams and how Dr Whitney created them. Feehan takes us way further out there with their abilities and the, ahem, estrangement between them and their creator. And after fourteen books, I’m still not buyin’ supermodels, doctors, billionaires, and crime bosses signing up for military service, let alone Whitney’s “enhancements”.

Still, the series certainly makes for some exciting action and makes those unbelievable abilities more so. It also satisfies that bloodthirsty part of me. I’m fascinated by how these men take down the bad guys and protect their own. I gotta say, I did love their reaction to Zhu’s men shooting up the club; I so agree.

On the other hand, Feehan tends to str-e-t-ch things out and out and out. All that sex just plain wore me out. Never thought I’d say I got tired of it, but…*eye roll*

Feehan is using dual third person point-of-view from Zara’s and Gino’s perspectives. I kinda wish she hadn’t. I got tired of being beat over the head with Zara’s obsession with how stupid and useless she is, with her fear of pain, with her desire for a strong man to take care of her. I did not “buy” Zara’s concerns for what she could tell Gino and whether she could release her big secret to Zeke, Trap, and Wyatt. Jesus, she’s seen what they’ve done for her. She sees how happy Pepper, Bellisia, and Cayenne are, how much they trust the men. I mean, hello!? It makes me wonder just how smart Zara is.

Her reaction to Bellisia greeting her husband was incredibly childish, but then she does have good reason for not understanding relationship dynamics. As for Bellisia. She’s another one for jumping to conclusions, insisting people see things her way.

As for Gino, I was exhausted with all his whining on about how his parents’ murders affected him. Yes, it was horrible. I’m thrilled he was able to “pay back” those murderers. But then the whinging continues on about the kind of woman he needs, how he never thought he’d find someone, oy…gimme a break. And yet, I did appreciate his perspective on Zara being a submissive. It was excellent.

As for Feehan’s writing style… Okay, Covert Game is an improvement over her last few stories, but she still has this jumpy thing going on between paragraphs. It’s not a constant, but frequent enough that my eyes got to rollin’ again. Some of her “jerks” were too silly to actually be uttered or thought by such supposedly strong characters.

Ya know, I gotta wonder. If Zara can download all these files, why does she have to actually be inside? Seems like a LOT of risk to run. What’s with introducing Gino’s nickname so late in the game?

I do adore that Cayenne. She’s so forthright, ROFL. I also adore the family feeling of the team, how much they care for each other…and that Nonny. She’s an amazing woman, an incredible cook, and an intuitive medic with a knowledge of herbs.

But then, Feehan winds it up with this statement:

Yep, that about sums up the entire series.

It’s a suicide mission for the GhostWalkers. Seems Dr Whitney “lost” one of his GhostWalkers to a Chinese crime boss. She hasn’t been seen, and her mission is vital.

I do like Dr Zara Hightower. Beautiful and bright (an undergrad at MIT, her PhD at Stanford) with a passion for computers and machine learning, who has developed the VALUE system, which integrates learning techniques and then uses them in context. She’s a world treasure, and she has her own value to Whitney as an industrial spy, even if she can’t take pain.

Dr (and Master Sergeant) Gino “Phantom Wind” Mazza, a surgeon, was adopted by Ciro Spagnola, crime boss, when his son, Dr (and Colonel) Joe Spagnola, found his best friend under his dead family. Now Joe, a psychic healer and surgeon, is the squadron leader for the GhostWalker team.

The Louisiana GhostWalker unit is…
…Team Four and is overseen by Major General Tennessee Milton. Each man on this team was given a strand of big cat DNA, and now the team is setting up a base camp surrounding the Fontenot family home. Grace “Nonny” Fontenot is Wyatt’s eighty-some-year-old grandmother, a traiteur with second-sight, and the glue that holds them all together. Dr Wyatt Fontenot is married to the newly pregnant Pepper, and they have triplets, the little viper chicklets: Ginger, Cannelle, and Thym (Viper Game, 11). Flame is Wyatt’s sister-in-law, married to his brother Gator (Night Game, 3). Jaimie is another GhostWalker wife (Street Game, 8).

Bellisia (genetically cross-engineered with blue octopus with a deadly poison and setae that allow her to climb anything) is Zara’s best friend and is married to Dr (and Captain) Ezekiel “Zeke” Fortunes (Power Game, 13). Mordichai Fortunes is Zeke’s brother. Chief Master Sergeant Rubin and Diego Campo are brothers with the psychic ability to disrupt electrical equipment. Dr Trap Dawkins, a brilliant billionaire with Asperger’s, is married to Cayenne, who has tremendous spider powers and cannot cook to save anyone’s life. Dr (and Lieutenant) Draden Freeman had been a supermodel, too gorgeous for words, who has a passion for running. Donny and Adam Cox and Gerald Perkins defected from Whitney’s GhostWalkers.

Shylah had been the other part of Zara and Bellisia’s trio. They haven’t seen her since Bellisia escaped. Ryland Miller was one of the first GhostWalkers (Shadow Game, 1); Lily Whitney Miller is Ryland’s wife and Whitney’s adopted daughter.

Berengere had been Nonny’s beloved husband. Lonna and Melissa had been Nonny’s best friends back in the day. The now-named Huracan Club has been owned by Thibodeauxs for years with Delmar Thibodeaux its current proprietor. Pascal and Blaise Comeaux are brothers, the only nasty neighbors the Fontenots have; Alide is Pascal’s wife. Shanty and Jean-Baptiste were their parents.

Houghton and Hurley are guards at the U.S. Embassy in Shanghai.

Dr Whitney is…
…a horrible megalomaniac who buys young girls and experiments on them with genetics and psychic abilities, holding them prisoner, using them. What he learned on them, he used on soldiers who volunteered. The men whom Whitney sends to re-capture Zara include Damon, Glenn Ridges, Tom, Tyler, Brax, and Buck. Senator Violet Smythe had been a GhostWalker who went rogue and betrayed the U.S. and her fellow women.

Jacopo Mazza had been Gino’s father; he and Ciro had served in the Marines with Sergeant Major Theodore Griffen and had been friends ever since.

The cover is grim with that dark Shanghai skyline, a driving rain making it worse with a dark-haired, dark-shirted Gino, a five-day stubble on his chin and a helmet of tousled black hair, as he stares grimly out in a three-quarter profile. A quick info blurb in white is at the top below which is the author’s name in an embossed metallic silver. The title is at the bottom in an embossed copper with the embossed series information below it, in a ghostly outline.

The title is what Zara plays, a Covert Game.