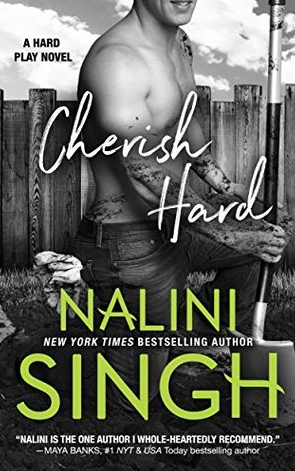 First in the Hard Play romance series and revolving around Ísa Rain and her family and friends in New Zealand. The couple focus is on Ísa Rain and Sailor Bishop.

Singh has set up a dilemma for these two.The example her parents set is not what Ísa wants for her future, and yet Sailor is determined to go for his dream. Only, it’s a priority Ísa hates. Worse, how is Ísa supposed to know if Sailor is as big a slimeball as Cody?

Yep, Cherish Hard uses a third person dual protagonist point-of-view to ensure we have access to Ísa’s and Sailor’s thoughts and feelings — I especially loved the epiphanies! And as usual, Singh writes characters you love and cheer for, who are willing to take a hard look at themselves.

You will crack up as you read of Ísa’s dating experiences. Sure seems to be typical for the poor girl, a lousy mother, a lousy father, a lousy situation with some really lousy dates, lol.

That mother of hers is some battleax, and rightly called “Dragon”. Ísa prefers poetry while her mother wants a hard ass. That’s not the only area in which her mother is hard, and it’s that, that keeps Ísa humoring her mother, saving her brother and sister from that abandonment they suffer. It breaks my heart to read how out of it Ísa’s parents were. I can see why she tries so hard to be there for her siblings.

Then her mom has to go and ensure that any building or outer meetings or conferences are super accessible for anyone, the scholarships she sets up, the educational programs…how’s a person supposed to truly hate her?

Poor Nayna has agreed to this arranged marriage deal in an attempt to heal her family’s broken heart, and when she meets this guy…that’s it. She rushes away from him so fast…because what he was saying sounded so smart, lol.

I do love the idea Sailor has for those parking lots, and I wish more businesses would consider this! It’s certainly a unique spin in Cherish Hard. I did enjoy Sailor’s negotiating skills too, lol. He’s quite persistent in his courting as well with a unique approach that is so appropriate to his interests. It makes him an interesting character, different from others.

Singh is also setting us up for Nayna’s story in Rebel Hard, and damn…it’s so sad when siblings feel like they have to make up for parental disappointments. And sadder when they realize the truth of their efforts.

There’s a huge disparity between them, but how is Ísa supposed to resist someone who’s intelligent and cares about people. Someone lucky enough to have a tight knight family. Well, and that body of his…

Sailor Bishop has only one goal for his future — to create a successful landscaping business. No distractions allowed. Then he comes face-to-face and lips-to-lips with a woman who blushes like an innocent…and kisses like pure sin.

Ísa Rain craves a man who will cherish her, aches to create a loving family of her own. Trading steamy kisses with a hot gardener in a parking lot? Not the way to true love. Then a deal with the Dragon makes Ísa a corporate VP for the summer. Her main task? Working closely with a certain hot gardener.

And Sailor Bishop has wickedness on his mind.

As Ísa starts to fall for a man who makes her want to throttle and pounce on him at the same time, she knows she has to choose — play it safe and steady, or risk all her dreams and hope Sailor doesn’t destroy her heart.

Magadalena Rain-Stefánsdóttir, a.k.a., Ísalind “Ísa” Rain, is an English teacher with a love for poetry. Her father is Stefán, the man who focused on a failing business turned it into a global empire. He got rid of the last wife, Jenetta, but not to worry, he’s already engaged to Elizabeth Anne Victoria. Amma Kaja had been Ísa’s paternal grandmother. The damaged Catie is her little sister; Jacqueline’s fourth husband, the devil-may-care, gambling Clive, is Catie’s father. Martha is Catie’s live-in helper who’s on her side. Tina is Martha’s daughter who just had a baby. Harlow is her brilliant brother, well, okay, technically a stepbrother.

Nayna Sharma is Ísa’s best friend and an accountant at Hillier & Co. who is facing an arranged marriage. Madhuri is Nayna’s older sister who ruined Nayna’s life forever.

Sailor Bishop was big for his age with ambition to match; now he’s a well-muscled landscape gardener. His brother Gabriel will become a professional rugby player and captain of the team (Rock Hard in the Rock Kiss series). Jake, the gearhead, and the very happy Danny are his younger brothers. Alison and Joseph Esera are his parents, okay, so Joseph is his stepfather, but he’s the only real dad he’s had. Brian Bishop is the father who ran away.

Crafty Corners is…
…Ísa’s mother’s booming business. Her mother, Jacqueline Rain, a.k.a., the Dragon, is a demanding woman, the CEO and financial powerhouse. Ginny is the Dragon’s junior assistant. Annalisa Rhymes is the senior assistant. Lana and James also work for her. Trevor Jones, a competent lawyer who wants to work for Jacqueline, is a stepbrother, technically, but Ísa doesn’t see it that way, even though Mother is married to the vague Professor Oliver Jones, his father.

Fast Organic is a new idea Jacqueline has for upscale fast food.

Raj Sen is a friend of Sailor’s who’d rather be putting his time into his construction business. Kane is another friend of Sailor’s whom he met playing rugby; he’ll be picked to play for a team in Japan. He met that jerk Cody “Slimeball” Schumer the same way. Cody is now dating Suzanne, the bullying mean girl.

Principal Violet Cafferty is in charge at the prestigious high school in Rarotonga. Diana Eastin, the gregarious music teacher, and Jason Jeng will also be teaching evening classes this summer.

The cover is a black-and-white photo of a well-muscled Sailor kneeling on the ground with his shirt off and dirt up past his elbows, wearing jeans with his gardening gloves in his back pocket and holding a shovel against a fence and sky background. The series information is in black in the left portion of the sky. The title is in a white script across Sailor’s torso. The author’s name is in a lime green with additional info blurbs in white.

The title is exactly what Ísa and Sailor do, they Cherish Hard, for they know what they want.