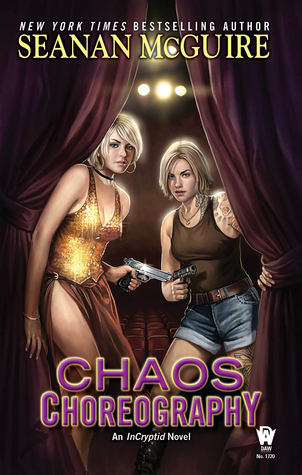 Buy on Amazon
Goodreads
Also by this author: Chimes at Midnight, Indexing, The Winter Long, The InCryptid Prequels, Pocket Apocalypse, A Red Rose Chain, Reflections, Once Broken Faith, "Dreams and Slumbers", Magic For Nothing, Indigo, Every Heart a Doorway, The Brightest Fell, "Of Things Unknown", Beneath the Sugar Sky, Night and Silence, "Suffer a Sea-change", The Girl in the Green Silk Gown, "The Recitation of the Most Holy and Harrowing Pilgrimage of Mindy and Also Mork", Tricks for Free, That Ain't Witchcraft, "The Measure of a Monster", The Unkindest Tide, "Hope is Swift", Come Tumbling Down, Imaginary Numbers, "Follow the Lady", "The Fixed Stars", "Forbid the Sea", "No Sooner Met", Across the Green Grass Fields

Fifth in the Incryptid urban fantasy series revolving around the cryptozoologist Price-Healey family. The focus is on Verity Price and her second chance at a dance career and is set in L.A.

I enjoy paranormal fantasy stories…yeah, I reckon y’all can tell, lol. And my favorite thing about the Incryptid series is those Aeslin mice and all their feasts and rules. The great feast of Dammit, Enid, Where Is That Girl. The rule of the Well-Groomed Priestess that “What Has Been Discarded, You May Have, But Don’t You Little Monsters Nip My Embroidery”. They’ve now incorporated dance into their religious rituals because of Verity’s interest in dance; she says “watching Aeslin mice do the cha-cha is an experience”. Then there’s the booty they find in the theater *more laughing*

Huh. I never thought about the difference between “not wanting for funds” and “staying under the IRS radar”, lol.

It was a fascinating look behind-the-scenes at a reality dance show. And I was aching and hurting as I read what the dancers went through! Anyone hoping to get onto a reality show ought’a read this, as advance notice of what to expect.

Even more fascinating is Verity and Dominic’s approach to life, their interactions with the mice, how supportive they are of each other, and the kind of care they need to take, lol.

“Being a smart shopper doesn’t just mean clipping coupons and watching for sales. Sometimes it means understanding when you need that Kevlar vest a lot more than you need to wait for it to go on clearance.” – Evelyn Baker

That Jessica is something else. The complete opposite of Grandma Alice, who’s tough but with a heart. That “Elle” just slides right in.

Ah-ha! The truth behind Maleficent and Disney!

I can understand Verity’s fascination with free-running, and while I’d love to try it…I ain’t in no kind’a shape for it, *more laughter*

Life gets exciting as bodies start turning up with particular markings, pools of blood that never existed, and intra-dimensional doorways pop open.

Verity’s right. Humans are much worse than the cryptids.

And now I need some Chinese food.

Three years ago, America’s Dancer of Choice was Lyra, and Valerie decided a career in dance wasn’t meant to be.

Now Dance or Die is planning a reunion show of all the best dancers from the past five years, and Valerie Pryor can’t believe she has a chance. Again. Only, television exposure could out her to the Covenant, but that lure is impossible to resist, and she and Dominic are off to L.A. for one last shot at the big time.

A tricky proposition when they start stumbling over carved-up dead bodies.

The free-running Verity Price in the crypto world — Valerie Pryor in the world of Latin ballroom dancing (and Verity, the Arboreal Priestess, bride to the God of Hard Choices in Dark Places — that would be Dominic — per the Aeslin mice). Dominic De Luca (he’s planning on changing his last name) is her husband and ex-Covenant; his alter ego will become David Laflin. Yep, the Covenant is looking for him too.

Tattooed and grenade-equipped Grandma Alice is an intra-dimensional traveler who’s been hunting for Grandpa Thomas. In this story, she’ll be Verity’s sister, Elle. She’s the senior priestess of the family, but with two identities: Noisy Priestess when home and Pilgrim Priestess when looking for Grandpa.

The Aeslin mice have an eidetic memory and believe the Price-Healys are their gods.

“‘They’re Aeslin mice,’ I said. ‘They would rather do anything that involves food.’

‘HAIL! HAIL THE WISDOM OF THE ARBOREAL PRIESTESS!'”

The television show is…
…Dance or Die with Brenna Kelly as the show’s host…and a dragon princess with a proposition for Verity. It’s produced by Adrian Crier Productions with Adrian Crier as the executive producer. Lindy O’Toole has Botoxed herself out of expression and is one of the judges for the show. The easygoing Clint Goldfein is another judge, a choreographer, and a producer. Marisol Bustos and Sasha are choreographers for the show.

Lyra was the winner from Valerie’s season. Anders Clarke prefers tap and is in love with Valerie, who had been his dance partner. Pax had been Lyra’s partner; he’s also a Ukupani and an aquatic therianthrope shark shifter with two wives and a husband. Lo had won in her season, partnered with Will. Raisa and Graham are week one; Bobbi and Danny (ballroom); Leanne and Mac (ballet); Troy; Jessica is the mean girl; Poppy (ballroom) and Chaz (jazz); Emily; Jessica; Reggie; Malena is a chupacabra; and, Ivan‘s specialty is jive.

The L.A. Dragon Nest is hidden…
…within the Shady Oaks Mental Institution. Osana is a laidly worm, which are good administrators. I think Catherine is Osana’s older sister?? Chantelle is a Nest-sister.

South Riverside Flea Market
Siobhan “Bon” is a routewitch, who had been with the Campbell Family Carnival as their fortuneteller. Great-Aunt Laura Campbell was a routewitch, an ambulancer. Routewitches pull magic from the long sweep of the road.

The ghoul community had…
…worked together with the bogeymen and the hidebehinds, until they got screwed by the government and land developers. The dragons had a much better idea. Aurelie is the young ghoul having the tea party. And Verity has info on a dollmaker who does cryptids.

Back in New York
The Freakshow is a cryptid bar where Ryan is a tanuki bartender with the waheela girlfriend. Candy is a dragon princess of the Manhattan Nest and William‘s primary wife. Betty.

Nemo is the plesiosaur. Charlie, Kim, and Angie had gone on an archeological dig. Uncle Mike and Aunt Lea (she’s an Oceanid) should be able to help. Titanoba might have qualified for snake god status, although it seems that it’s not the snake himself that is the attraction. The Covenant of St. George is an organization that hunts down cryptids, seeing them all as unnatural monsters.

Verity’s great-great-grandparents, Enid and Alexander Healey, had quit the Covenant and moved to Michigan. Frances Brown had been her great-grandmother and highly honored by the chupacabra community. Thomas Price is her grandfather who met and fell in love with Alice Healy, Frances’ daughter.

Kevin Price was their son who married Evelyn Baker, Verity’s mother. Dad is an academic who can translate anything; Mom provides medical advice, care, and remedies to the community. Antimony is Verity’s sister, a.k.a., the Precise Priestess, who’s into roller derby. Alex is the brother who loves reptiles, amphibians, etc., and works at a zoo in Ohio. Jane was their daughter, and she married Theodore Harrington, an incubus. Jane and Theodore have two children: Elsie and Artie, the reclusive, half-incubus, comic book-loving nerd.

Evelyn had been adopted; her mother, Angela, was a cuckoo, and her father, Martin, is a Revenant. Angela and Martin had also adopted Drew, who had grown up in a bogeyman community, and Sarah, a cuckoo, a telepathic cryptid; she’s still recovering from events in Midnight Blue-Light Special, 2. Aunt Mary is a crossroads ghost (Sparrow Hill Road, 1 ). Aunt Rose is another ghost and lives in New Orleans (“The Ghosts of Bourbon Street“, 3.1). Uncle Naga, a professor of intra-dimensional studies, is a naga from a parallel dimension.

I suspect the two gun-toting blondes peeking out from behind the purple velvet curtains are meant to represent Valerie and Grandma Alice. Valerie is wearing the sexy gold sequin vest with the brown velvet skirt split-up-to-here while Alice is in rolled-up jean shorts, a brown tank top, and an armful of tattoos.

The title is what it is on the dance floor for a reality TV show, Chaos Choreography.