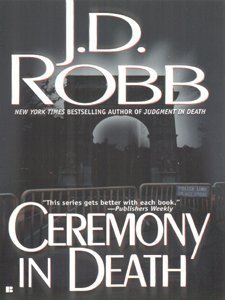 Fifth in the In Death futuristic romantic suspense series revolving around detective Lieutenant Eve Dallas and her gorgeous husband, Roarke. The story is set in the New York City of October 2058. It’s been less than a month since Rapture in Death, 4.

The otherworldly aspect of Ceremony in Death introduces a new future character and forces Eve to become more familiar with a colleague’s family. It also finds Dallas and Roarke struggling with the metaphysical aspects of the story. Of course it doesn’t stop Roarke from horning in on Dallas’ investigation, lol.

Robb is using third person global subjective point-of-view with the major perspective coming from Dallas. In this POV, we experience other characters’ emotions, thoughts, and actions, including Roarke, Feeney, Peabody, Summerset, Jamie, Alice, Selina, and more.

Whew, it’s a terrifying unrolling of a Satanic cult that preys on its members. Its leaders revel in deception, blood, and death. And screwing around with Dallas.

There’s an interesting use of symbolism with the wolf, the boar, and the silver blade.

The snark in Ceremony in Death is a happy constant. As is the embarrassment it causes Eve to be associated with Roarke’s wealth and its accompanying social requirements, lol. It sure gives Dallas a whole ‘nother side, humanizing this forceful, aggressive woman, *more laughter*. It does crack me up that Summerset enjoys Mavis even as he despises Dallas.

Whoa, Feeney would trust Dallas to go through the door with him, and his sense of betrayal is deep. Deep enough that it sends Dallas into a spiral.

It’s a character-driven story with the action packed in to reflect those characters and create those interesting police procedural conflicts.

Eve is called in to secretly investigate a cop who might be wrong. Detective Sergeant Frank Wojinski is suspected of dealing in illegals . . . or doing his own, off-the-books investigation.

Involving his family, Wojinski is determined to rescue his granddaughter, and it pulls Dallas into a Satanic brew of evil.

Lieutenant Eve Dallas is in charge of Homicide at Cop Central. Roarke is her supportive billionaire husband — practically an Irish god. The stiff-necked Summerset is Roarke’s majordomo, chief of staff, butler, father . . . Galahad is the cat Eve inherited in Naked in Death, 1

Mavis Freestone is Eve’s best friend, a singer about to sign a recording contract, and who loves the outrageous. Before Dallas arrested her, back in the day, she ran cons such as Madam Electra and Ariel. Leonardo, a fashion designer, is her love. Trina is the beauty stylist who terrifies Dallas. Nadine Furst is the top on-air reporter at Channel 75 and good friends with Eve in their conflictive relationship. Eve does love Nadine’s ability to do research. Suzanna is Nadine’s camera operator.

NYPSD
Officer Delia Peabody is Dallas’ aide. Captain Ryan Feeney is in charge of the Electronics Detective Division (EDD) and had mentored Dallas and is now her friend (Sheila is his wife). Commander Jack Whitney (Anna is his formidable wife) is Dallas’ superior. Chief Tibble is in charge of the entire NYPSD. Dr Charlotte Mira is a premier psychiatrist and the top profiler for the department. Carter gives Dallas goodhearted grief. Dr Arthur “Simon Says” Simon is a fellow psychiatrist with the NYPSD. Schultz is with the prosecutor’s office.

Detective Sergeant Frank Wojinski is a good cop and had mentored Ryan Feeney. Sally is his wife. Brenda Lingstrom and Curtis are their children. Their grandchildren include Alice Lingstrom, who works at Spirit Quest as a clerk having deferred college; the brilliant Jamie Lingstrom, who interests Roarke; and, Pete. Jan Lingstrom is Brenda’s ex-husband.

Spirit Quest is . . .
. . . a Wiccan shop and consultation center owned by the psychic Isis Paige, who has foresight. Charles “Chas” Forte, a healer, is her business and life partner with secrets. Ellen Forte is Chas’ much-abused mother. Jane is a clerk. Mirium Hopkins is about to be inducted into their coven. Cassandra is a friend and psychic. Leila, a member of the coven, is a lawyer.

The Athame is . . .
. . . a private club with a religious theme and licensed for private sexual functions. Selina Cross and Alban are the owners as well as the leaders of the Church of Satan. Detective Marion Burns has been undercover as a bartender. Robert “Lobar” Allen Matthias, a preacher’s kid, is a young idiot and sociopath who acts as a bouncer.

Thomas Wineburg is a fifth generation banker, Wineburg Financial. Roarke has a few things to say about him, his family. Louis Trivane is a big shot celebrity defense lawyer. Marianna Bingsley is the heiress to a department store and a professional manhunter. Dr Carlo Mancinni is a cosmetic enhancement guru.

The Down and Dirty is a dive Dallas frequents where Crack is a bouncer. Jess Barrow is/was a musicologist who caused mayhem in Rapture in Death, 4. ScanAir is being bought out where Mr Vanderlay had been an employee. Petrov is a droid translator. Sky Ways is one of Roarke’s. David Baines Conroy, a preacher, is an infamous mass murderer. His victims included Doreen Harden, Emma Tangent, Lowell McBride, Darla Fitz, and Martin Savoy. Dr Ernest Renfrew runs the Miller Clinic. Coffee Ole, Spirit Quest’s neighbor, appears to be a coffee house and offers up illegal betting.

I think the cover is supposed to convey menace but it’s more dull with its range of grays providing a full moon rising over a skyline of buildings centered in a high arch. Portable rail fences guard the site. All the text is in white with the author’s name at the top and an info blurb below it. Below the top edge of the fences is a testimonial with the title immediately below it.

The title is what Selina and Alban enjoy, their Ceremony in Death.