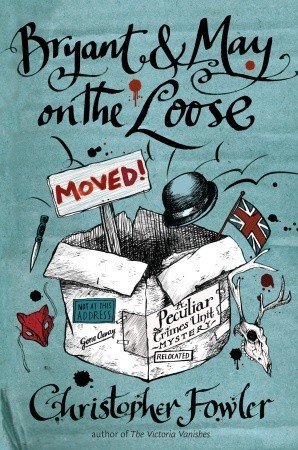 Bryant & May on the Loose Genres: Detective
Published by Doubleday on July 16, 2009
Pages: 352
Format: Hardcover
Source: the library


Seventh in the Bryant & May detective mystery series revolving around two past-retirement-age detectives and the unit they’ve inspired. Based in London and taking place before the 2012 Olympic Games.

This series is great fun as it incorporates myths and mysteries that are “real” in our own world. Fowler makes it even more of a twist with Bryant’s biggest weakness being his need to pull everything around myth and magic. It’s also his greatest strength. Although May’s mention of the 900- hotline is a crack-up. It’s amazing how Fowler manages to tie all together: the blend of history, myth, modern corruption, and all those red herrings.

Shutting down the PCU is such a very government thing to do. A police unit with a very high success rate in solving crime. Oh, no. Can’t have that… Do be sure to read the note for the incoming team. It is too, too funny, and if I were them, I’d head for the hills before I went into the former PCU offices, ROFL. They might want to consider wearing wearing haz-mat suits!

I had to laugh even more as some of the more reluctant members of the PCU team admit to missing the unit. Yup, even Renfield!! Who knew he had the heart of a romantic beneath that exterior.

May does a nice snow job on Faraday to get the unit provisionally back. Nothing appeals more than the threat of money *shakes her head* It sure does make a crazy reversal at the end. Of course, Faraday has to make it near impossible, which in turn makes for a crazy new office set-up.

The office location isn’t the only change. The characters are having all sorts of epiphanies.

I totally understand Xander’s anger. Unfortunately, ADAPT’s practices are too prevalent in the business world…right along with the connivance of government.

The ending made me nuts. It hasn’t actually resolved anything, and I’ll have to dive into Off the Rails to find out if they get reinstated or what!?

PCU, especially Bryant and May, are under investigation for a number of illegal activities. And with the unit broken up, the team are each wandering off on their own job hunts. Until.

Colin’s latest job turns up a headless corpse and Meera’s bar-hopping ends with Herne the Hunter. Are they connected…? Bryant certainly believes so.

Giles doesn’t help when he states that “you’ve got the same man dying twice in two separate places, days apart”. It’s a menace that is threatening one of the biggest redevelopment projects in London. One that government is desperate to see succeed.

Former Senior Detectives Arthur Bryant and John May (recovering from a cancer scare) are coping in different ways. Bryant has fallen into depression and won’t see anyone. May is considering a private detective career. Without Bryant. Brigitte is the new love in May’s life. Alma Sorrowbridge is the technical owner of the “loft” she shares with Bryant in the old toothbrush factory…and they’re about to be homeless.

“He’s right, Bryant thought. I’m always drawn to the other side, the spiritual, the instinctive. If we’re to survive this, I need to do something practical and useful. I think I need to see a witch.”

The Peculiar Crimes Unit (PCU) was…
…a specialty unit formed at the start of World War II to handle crimes outside the usual that could affect morale. It cannot, however, survive the bureaucracy and hidebound thinking of today’s governmental idio… power-hungry bureaucrats.

Detective Sergeant Janice Longbright is now working in a vintage clothing shop; she channels Diana Dors in her own sartorial style. Raymond Land, the former acting temporary chief, took early retirement and is stuck with Crippen, the office cat while his wife, Leanne, is taking all sorts of lessons from young studly men. The socially incompetent and former crime scene manager (with a preternatural skill at knowing what happened at a crime scene) and IT guy, Dan Banbury appears to be in demand. He also seems to be back with his wife. Giles Kershaw somehow landed on his feet and is still able to work in forensic pathology as the St. Pancras coroner. April May, John’s granddaughter and their former office manager, is struggling against her agoraphobia again. Detective Sergeant Jack Renfield, a.k.a., Captain Bringdown, returns to the Met, dissatisfied; if he wants to keep his job, he’ll have to spy on the team. Detective Constable (DC) Meera Mangeshkar is avoiding Colin’s drunken calls. DC Colin Bimsley slips into alcoholic anger and takes on a number of odd jobs in between the fights he seeks out.

Police Constable Liberty DuCaine had tried to join PCU and instigates a new interest that Longbright reciprocates. Liberty’s siblings include Equality and Fraternity. PC Darren Purviance is from Camden and reluctant to do his job. Rosa Lysandrou is the secretary (??) at the St. Pancras coroner’s office. Professor Marshall, the previous coroner, had some kind of breakdown.

Maggie Armitage is a white witch and the leader of the St. James the Elder Coven. She’s also an excellent friend of Bryant’s and looks like “a deckchair piled with seaside knickknacks”. She tells Bryant about the former tenants of their new “office”. The young Rufus Abu is one of May’s Haphazards and absolutely brilliant with computers. Sashi is one of Meera’s friends. Mr. Hawker is an estate agent. Alfie Frommidge runs the Café Montmartre (formerly Alf’s Cafe). Being so much fancier, Alfie is now charging double.

“‘People want something classier.’ Alfie wiped his hands on his apron and headed back to the kitchen to throw a fistful of parmesan shavings onto his instant mash.”

The Home Office has…
…oversight of PCU, and its Security Supervisor Oskar Kasavian has been doing all he can to shut them down. Most of it illegal. Leslie Faraday is the HO Police Liaison Officer. An idiot with a photographic memory. Janet Ramsey, the editor of Hard News, was the woman with whom Kasavian had had the affair (Ten Second Staircase, 4).

Camden Council is…
…where Ed Tremble works as the town planning officer who is fascinated by his area’s history.

Rafi Abd al-Qaadir is trying to open a shop and needs a hand with renovations. Izabella and Piotr are dating. The pregnant Lizzi is getting fed up with her activist boyfriend, Xander Toth, the leader of the Battlebridge Action Group.

St. Pancras Old Church is…
…near King’s Cross and has a long, long history. The Reverend Charles Barton is the vicar. Austin Potterton has been hired to photograph and catalogue the graveyard for the diocese. Dr. Leonid Kareshi is an archivist hired to supervise a dig in the vault.

“Trust a man of the cloth to think the worst of other people.”

Albert Dock Architectural Partnership Trust (ADAPT) is…
…developing a huge part of London. Marianne Waters is one of the senior partners. (Some interesting bits about Margaret Thatcher and Lady Porter, London’s arch-villainess.) Maddox Cavendish is one of the original architects — and her hatchet man. Chris Lowry is the senior public relations officer. Joseph is one of the janitors. Clive is the chief electrician. Constantin “Dinu” is his trainee.

K & D Decorating is…
…one of the companies working for ADAPT. Terry Delaney was divorced and a truly nice guy who loved his daughter. His ex, Niamh Connor, is the nurse who treated Meera’s arm. Mrs. Mbele was his neighbor. Jess is one of Terry’s co-workers. Casey was Terry’s girlfriend.

Mr. Fox is an invisible sociopath who soaks up knowledge from all whom he encounters. Mac is a young boy he takes under his “wing”. Herne the Hunter is a man in a costume wearing a headdress of riveted knives.

1940, the Blitz
Ethel, a cleaning lady, is helping out next door at Bea and Harold Barker‘s when the bomb hits. Alf is Ethel’s husband. Keith Barker is Harold’s son. Mrs. Irene “Auntie Reeny” Porter is the next-door neighbor. Her husband, Thomas, didn’t survive. Their son, William, survived and had a daughter, Ellen.

The cover is a grayed and speckled teal background with the title and author’s name in a black script at top and bottom, respectively. The graphic centers around a dilapidated cardboard moving box around which swirls representative examples of Bryant’s interests: a skull, a mask, a knife, and his trilby. The British flag reminds us of the story’s setting, and the “Moved” sign reminds us of events in The Victoria Vanishes, 6.

The title, lol, is too true, for Bryant & May on the Loose present a danger to the Home Office’s peace of mind since they’re the ones who freed them up.

2 responses to “Book Review: Bryant & May on the Loose by Christopher Fowler”