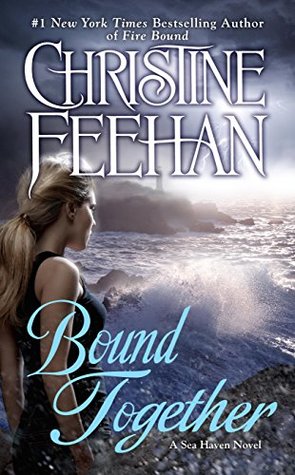 Bound Together by Christine Feehan
Published by Jove on March 21, 2017
Pages: 415
Format: eBook
Source: the library

Sixth in the Sisters of the Heart paranormal romance series (and thirteenth in the Sea Haven overall series) and revolving around six women bound together by their traumatic pasts. The couple focus is on Blythe Daniels and Viktor “Czar” Prakenskii.

The story is overrun with human trafficking and pedophilia, both from various pasts and into the present day. On the bright side, it includes a marital reunion as well as a family one to which Czar is so looking forward, as he hasn’t seen his brothers in years.

The underlying purpose in Bound Together is acknowledging what Czar has done to hold these sixteen men and two women together and alive. And Feehan slips this in under Czar working to get back inside Blythe’s good graces. The story does include a good chunk of back history on how Czar met Blythe and just why she’s so hostile. There’s also a mention of Czar’s appearance in Fire Bound, 5. More back history includes the reasons why the “sisters” were traumatized. Makes me want to go back and re-read the whole series!

It’s primarily a third person dual point-of-view that keeps us informed on what Blythe and Czar are thinking with occasional dips into a global subjective POV as we see what other characters are thinking and feeling. Feehan also seems to incorporate bits of the unreliable narrator POV.

Reaper cracks me up with his absolute disregard for any of Czar’s orders with which he disagrees. Blythe’s disregard for Czar mirrors Reaper’s, but her attitude doesn’t last long. Sure, she puts up a good fight at the start, but then she lets him in so easily. I don’t know if I could have. He sounds like the kind of guy I’d be getting pissy with, if only because he’s too demanding! Then again, he does seem to absolutely adore Blythe…

Sharon definitely had a number of mental issues. As for Kenny, he knows what he wants, and he will not back down. And good for him!!

Aha! We learn where the name for their club — Torpedo Ink — came from! There’s also the foreshadowing for Judgment Road, first in the Torpedo Ink spin-off series in the overall Sea Haven series. I love the hopes the motorcycle group has for their future, hopes that include the promises Czar has made to them about Blythe. The plans they have for a home base where they can live and be free in Caspar. Why they became a motorcycle club.

That attack on the Drake house was a crack-up. It’s followed by the attack in town, and oh baby, what a battle that was, lol. Those jerks never knew what hit them. As for the two-way ambush in the park…sigh…I do wish Feehan had put more tension into it.

It’s a character-filled story with plenty of action — all over the place! Pace-wise, it’s hard to say. I guess I’d judge it as fast in that there was always something happening (including all the sex), but a great deal of it was divided into separate actions against a variety of groups.

That said, I do enjoy these series. The equality between the men and women, their sense of self, and so full of family support and love…I cracked up over the idea of the puppy playdates!

And, awwww, seems Blythe and Viktor taught each other how to have fun.

For five years, Viktor Prakenskii has put his life on hold in order to take down the world’s most feared motorcycle club from the inside. But carrying out the insane violence and seeing the club’s exploitation of the innocent has brought his traumatic past roaring back. And there’s only one cure: to see the wife he left behind…

Blythe Daniels thought she’d never see Viktor again after he murdered her stepfather and left without a word. She rebuilt her life without him, becoming a personal trainer and physical therapist…becoming strong enough for others to lean on. But when Viktor comes back to Sea Haven, he’ll make Blythe question everything she thought she knew about good and evil — and the dark desires of the heart.

Blythe Daniels is one of six women who consider themselves sisters who bought a farm together. Blythe, whose empath gift enables her to amplify any emotion or energy in a room — as long as her reason for using it is selfless, owns a gym and is a personal trainer and physical therapist. The baby had been named Viktoria. Her mother, Sharon, was a cruel binge drinker who only got worse when she met Ray Langton, a smooth-talking pedophile who used Mom as a cover for his activities.

Blythe’s sisters are…
…all married to Czar’s brothers, the Prakenskiis, including Airiana, who was married to Maxim Prakenskii in Air Bound, 3 (10), has an Air gift; they’re adopting four children, who include Lucia who is becoming quite a baker and the sneaky Benito. Judith is an artist who paints and creates kaleidoscopes, and her husband, Stefan Prakenskii, helps her with the gallery (Spirit Bound, 2 (9)); Lissa is getting a reputation for her handblown glass (married to Casimir Prakenskii, and they both have a Fire gift; Fire Bound, 5 (12)); Lexi, the youngest with an Earth power, is hooked up with Gavriil Prakenskii (Earth Bound , 4 (11)); Rikki, who is autistic with a Water gift and dives for sea urchins, is married to Lev Prakenskii (Water Bound, 1 (8)) with a new Black Russian terrier, Maya; and, Kiss is another Black Russian terrier.

Torpedo Ink Motorcycle Club has…
…been deep undercover infiltrating a criminal organization. Their leader is Viktor “Czar” Prakenskii; he’d been known as Viktor Regent when he first knew Blythe. Alena “Torch” Koval is Ice and Storm’s sister with a gift to cause others to focus only on her; she rides with Czar as his old lady. Her nightmares are getting worse.

Lyov “Steele” Russak is vice-president. Savva “Reaper” (Viktor’s self-assigned bodyguard) and Savin “Savage” Pajari are brothers and sergeants-at-arms who can mimic anything or anyone and are growing apart from the others, becoming colder, especially Savage. Luca “Code” Litvin is treasurer and a genius with numbers. Isaak “Ice” Koval is secretary with a gift for bringing down the temperature in a room or heating it up quickly. Other members include Dmitry “Storm” Koval, Ice’s twin brother who interacts with storms; Maksimos “Ink” Korsak does tattoos; Kasimir “Preacher” Popov is a sniper; Lana “Widow” Popov is Preacher’s sister; Nikolaos “Mechanic” Bolotan gives off a disruptive energy and loves to tinker with anything electrical, making the club specialty gadgets with an ability to control any kind of metal or electronics; Pytor “Transporter” Bolotan, Mechanic’s brother, is a human computer, who learns languages within hours, devours books, and has incredible hand-eye coordination; Andrii “Maestro” Federoff plays a variety of instruments; Gedeo “Player” Lazaroff is also a musician; Kir “Master” Vasiliev is another musician who helps Mechanic with the gadgets; Lazar “Keys” Alexeev is another musician and the MC’s usual key to success; and, Aleksei “Absinthe” Solokov can influence people with his voice, functions as a human lie detector, and is the group’s lawyer.

The Drakes are…
…Blythe’s first cousins, from whom she has been estranged ever since the Drake sisters’ mothers’ ganged up against Blythe.

Deputy Sheriff Jackson Deveau (married to Elle Drake, Hidden Currents, 7), a former Army Ranger (or an ex-Marine) and CIA agent, is Evan’s target. Sheriff Jonas Harrington (married to the pregnant Hannah Drake, Safe Harbor, 5) knows all about the Drake sisters’ gifts. Abigail Drake is a marine biologist married to Aleksandr Volstov (Oceans of Fire, 3). Sarah Drake is married to Damon Wilder, who works for the Department of Defense (Magic in the Wind, 1). Kate Drake is married to Matt Granite, a former Army Ranger (Twilight Before Christmas, 2). Ilya Prakenskii is the youngest brother who works for Interpol and is married to the pregnant Joely Drake (Turbulent Sea, 6). Dr Libby Drake is married to Tyson Derrick, a medical researcher who volunteers with fire rescue (Dangerous Tides, 4).

Sea Haven
Derak Metzer is interested in Blythe. Inez Nelson and Frank Warner run the grocery store. Young Donny Ruttermyer helps out at the store and keeps an eye on Miss Donna. Leslee Huber, a massage therapist, is a friend of Elle’s who has mastiffs. Paula and Bronson are rangers at the park.

The Swords Motorcycle Club…
…is an international organization that runs drugs and weapons and engages in human trafficking. Their leader is a billionaire Greek shipping magnate, Evan Shackler-Gratsos, who is a whacked-out nutjob with a gift. Evan inherited his brother’s (Stavros Gratsos) shipping company.

The Louisiana Chapter of the Swords is…
…led by Habit. Jackson Deveau Sr (our Jackson’s father) used to be an enforcer for the club who rode with Evan’s mother as his old lady while his own wife struggled with her cancer. Speed, Harold, Ben Higgler, Charles, and Ronnie are members.

Sorbacov had a great deal of influence but was too interested in children. He and his murderous son ran the “schools” and “recruited” children by murdering their parents and using horrific threats to force the children into becoming assassins, expendable assets who were not even considered human beings. The school from which Torpedo Ink came was hell and where the children were expected to die.

Darby Hennessy is a fighter, struggling to protect her sisters, Emily and Zoe, from human traffickers.

Walter Sandlin had been Ray’s partner, and he has powerful friends in government and law enforcement. Kenny is Sandlin’s nephew.

The cover is dark in its blues and grays in the sky and the waves crashing against the rocky coastline. But there is also hope in the light shining down on the waves and surf. Hope in the blonde-haired Blythe, her hair pulled back in a loose braid and ponytail, wearing a black tanktop, as she stands in profile, looking out to sea on the left side of the page. At the very top is an info blurb with the author’s name in a fancy serif font, white outlined in black. The title starts just below Blythe’s shoulder in a fancy script, baby blue outlined in white. Tiny, and immediately below the title on the right, is the overall series information.

The title is about Czar and Blythe — and his “brothers” — for they are all Bound Together.