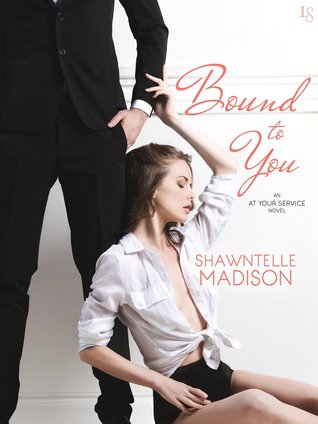 This book may be unsuitable for people under 17 years of age due to its use of sexual content, drug and alcohol use, and/or violence.
Buy on Amazon
Goodreads

This ARC was sent to me by NetGalley and Loveswept for an honest review.

Well, they wanted honest… I think Madison has a cute story, and it’s easy to see where the rest of the series will go from here. I also appreciated Madison switching points-of-view back and forth between Quinn and Sophie, and how easy it was to follow who was who.

I do like Madison’s characters. That Sophie is amazing! She truly has worked very hard to learn what her clients would like and to fit in when she needs to. She’s loyal and careful about her future. As for Quinn, he sounds like a treat-and-a-half as well, although he isn’t as well portrayed as Sophie. His character is more as if he’d been stamped out of the “hot, hunky billionaire with a predilection for dominance” mold. His family interaction was confusing without much background on their history. Madison talks of Quinn’s fall from grace, and I sure hope that “reveal” at the end wasn’t the reason for that fall. If it was…oh brother.

As for his needing Sophie to consummate that Japanese deal…no kidding. He hasn’t done a thing to research Japanese culture or manners on a deal that is so incredibly important to him. For that matter, how did he find Sophie and know she could help him get in to see this Japanese businessman? He seemed surprised that Japanese words rolled off her tongue so rhythmically: “As if she knew Japanese”. Tells me that he had no idea she could be useful, even though Quinn tells Miss Ashton up front that he’s hired her to “get [him] that face-to-face”. Maybe Ian told him to “trust him” on who he chose for Xavier to “cold call” and coordinate this deal, this deal that means so much.

Why would Xavier drag Sophie to Phoenix, to meet his family, when he must have some idea what a bitch his mother is? Why is he a family pariah? Why did Quinn need scholarships to go to college when his family has all this money? Why would Quinn need a bunch of agreements and contracts for a private viewing of a painting?

There was nothing in the story to make me believe that this “insta-love” was real, well, other than Madison telling me. I simply couldn’t get involved in the conflict. He spends, what? A few days with Sophie and suddenly he can’t live without her? I did like the reasoning Quinn had for that initial attraction. I wish Madison had continued with that wave when he’s wanting Sophie to come to Phoenix. Although I am starting to think this boy is too desperate for words during that scene at the business incubator at the university. To be fair, he does quickly realize that love means letting go. I just wish Madison hadn’t been jumping around so much.

I wish there had been more tension revolving around Rosalie and Sato, and the drama of the the not-loving-as-much scenario. Why would Sato send Sophie a letter and package every few months? I want to know more about why the cookbook is so important? I want an example of how Sophie uses food as conversation in her work. What was the point of Bob the Headhunter? Why did Carlie move to London? The restaurant dinner scene was not believable. Um, did Xavier sell his apartment or the company building? Maybe I missed that they’re the same thing??

Madison keeps dropping tidbits into the story and either doesn’t finish them off or ignores them.

Lana made me laugh with her “…tongue-surf my way down to his lollipop garden”.

That’s the storytelling aspect. Then there is the multiple matters of missing articles and prepositions, missing pronouns, poorly tensed verbs, no verbs(!), hit-and-miss punctuation, misspellings, confusing phrasing, and more.

No. Madison needs to do a lot more work on Bound to You. Here’s hoping she spends more time on future installments.

Through grace, talent, and hard work, personal concierge Sophie Ashton has built a successful business catering to the personal and professional needs of the wealthy. And when she meets her new client, a suave CEO who radiates masculine heat, she knows this is no ordinary job.

Past hurts ensure that Sophie keeps her professional relationships exactly that: professional. But Xavier Quinn is a man who knows how to get what he wants, and soon Sophie is tempted into his wicked dance of seduction. It’s meant to be a temporary whirl around the bedroom dance floor, for Xavier can’t give her his heart, not after his last love. And Xavier assures himself he can keep his distance from Sophie…but can he? He’s used to taking risks in work and in life, but the stakes have never been higher.

Xavier Quinn is a self-made billionaire with high expectations. Rosalie had been his girlfriend five years ago. Chris is his driver. Ian is his personal assistant at Silver Sparrow Systems. Marcus is his older brother, dissed by his dad; Becca is his mean wife. Their kids include the twins, Hayley and Heather, and Regan. August Quinn is his father, but whether he’s dead, divorced, or alive, I have no idea. The family owns a string of luxury resorts. Yates is the family butler in Phoenix. Steven isn’t family.

Nakamura Industries is…
…the company Quinn needs to create a prototype. Hideo Nakamura is head of the company and doesn’t want to talk to Quinn. The nasty Ichiro is Nakamura’s first assistant; Takeo is his second assistant. Dr. Hideo Tanaka is Nakamura’s head researcher. Hayato Takahashi and the art-loving Kaito Watanabe, the CEO of Watanabe Systems, are fellow businessmen.

Haruto Sato, Sophie’s first client, had been Sophie’s boyfriend two years ago. His banking family is based in Nagasaki. Haruto Komiko is an aunt. Aoki is one of Komiko’s nieces.

Jesse, a recent University of Alabama graduate, is Sophie’s very eager assistant. The sixty-five-year-old Franklin is one of the oldest vintage gown tailors in Boston. Mr. Duvall is pushing for an executive suite for the Stanley Cup playoffs. Pearl Donahue is amazingly obnoxious. Sakura No Hana is a traditional Japanese teahouse. Classica is an elegant restaurant. Dr. Hanley is one of Lana’s professors. “Shelley” is the pseudonym used with “Bill“. Luke is Quinn’s caddy. Robert Graham had been a high school boyfriend of Sophie’s. I suspect Tomas will appear in a future story with Carlie. Gail was the loser foster parent. The Phoenix Club is a local BDSM club. Hiruto is the owner’s son and works the counter at Aozakana; Carmine is his wife. The Carefree Cow Ice Cream Shop offers up the Fifteen-Scoop Challenge. Sounds tasty!

The cover is primarily blacks and whites: from the chest down, Xavier is in a black suit, his left hand in his pocket while Sophie is wearing a pair of black boy shorts with a white men’s shirt, open and tied at her waist. Xavier is standing against a white background with Sophie at his feet, leaning against his leg, one hand clasping his wrist. The title and author’s name are in red.

The title is what Xavier wants, what Sophie secretly wants, to be Bound to You.

2 responses to “Book Review: Bound to You by Shawntelle Madison”