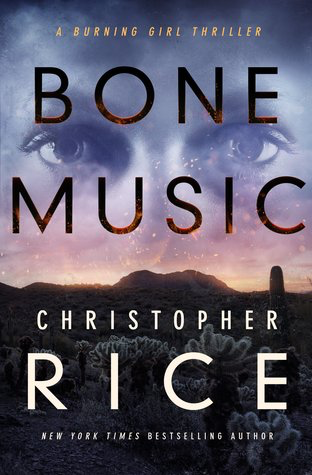 I received this book for free from Kindle Freebie in exchange for an honest review. This does not affect my opinion of the book or the content of my review.

A story narrative that uses in medias res with that confusing interview to pull you in and then goes backwards and forwards, using lots of flashbacks and incorporating the angel-devil inner conflict, mostly with Charlotte and somewhat with Luke.

It’s a common enough sub-theme, that family is what you make it, not just blood. You can’t help but laugh and cry at the same time at the start. And Rice pulls you right in.

It’s about Charley’s need for self-preservation at war with her subconscious questioning of herself: bred to kill, but wanting to be a better person. Angry for all those victims, their lives cut short. All of which we learn through multiple third-person point-of-view with Charlotte as the primary perspective and Luke and Cole as minor ones.

Rice certainly has an interesting premise for his story, and I kept forgetting that Charlotte may well have a shelf life with this new boost to her constitution. Nor is that the only teaser, as Rice has lots of ‘em in this, ensuring we’ll keep reading.

His characters are complex with us discovering different sides to them from good to bad and vice versa. It kept me wondering enough to keep flipping those pages and hoping book #2 isn’t far behind.

I did appreciate Luke’s explanation for his behavior. It does make it more understandable. No less awful, but…parents have GOT to stop forcing them to live the lives they want them to follow! It certainly does grant Charley a number of kudos, some of which she’s been realizing in this story. As for the FBI having a thing for Bailey. I should think they’d publicly denounce him and privately thank him! And it’s a sad reflection on society that rude behavior turns a person into a monster. Makes sense of the whole masks issue, but it’s not a reason to do what they do.

The niggles, well, as mean as it sounds, I do wish there had been more angst for Luke in getting past his past. This was too easy. Well, it’s too easy in the book, although it sure sounds like Luke suffered to get where he is.

I want to whine about the insta-love, but it is and it isn’t. I’ll also complain that Rice didn’t make it scary enough. I want more tension in the interaction between Charley and Cole.

It’s one heck of a plot voucher that leads Charlotte on a not-at-all-merry dance and into a happy ending…with a cliffhanger.

Seven years being groomed to kill, nine years exploited by the man who should have had her welfare at heart, and ten years in which to recover.

Only it’s not a recovery. Charlotte is in hiding, afraid of a world that wants to believe the worst of her. It’s when she’s facing those truths that Charley is secretly dosed with an experimental drug. Endowed with a shocking new power, Charley is pursued by her betrayer and the treacherous corporation desperate to control her.

Except from now on, if anybody is going to control Charlotte, it’s going to be Charlotte herself. She’s determined to use the extraordinary ability she now possesses to fight the kind of evil that shattered her life — by drawing a serial killer out from the shadows to face the righteous fury of a victim turned avenger.

Trina Pierce became Charlotte Rowe to escape her notoriety. Luanne is the grandmother who had sheltered Charlotte for the past ten years. Lowell Pierce is Charley’s jerk of a father who exploited her and earned a fortune on the Savage Woods films.

Kayla LeBlanc is the lawyer who helped Trina sue her father.

Altamira, California, is…
…where Luanne had lived and run a pet supply store. Martin “Marty” Cahill, a building contractor/handyman dishonorably discharged from the Marines, had been her grandmother’s boyfriend. His posse of 12-steppers includes Dr. Marcia Brewerton; the sleeved Dale; Lonnie; Trev Rucker, a former Marine sniper; and, Dave Brasher.

Luke Prescott is a new, shiny sheriff’s deputy in town. He’s also an old schoolmate of Charlotte’s, a nasty bully. He’s currently living in the old Hickman place, the childhood home of Emily, a school friend of Charlotte’s. Bailey is Luke’s youngest brother, a computer hacker. Reggie had been Luke’s freshman-year roommate.

Sheriff Mona Sanchez is half Chumash, Luke’s boss, and former military. She’d also been friends with Luke’s mother. Bill Poindexter was the deputy who retired. Peter Henricks is another deputy. Judy Lyle is reception and dispatch.

Dan Soto runs the Gold Mine Tavern and has a scanner. The Copper Pot is a café with the best pie. Silver Shore Investments sucker punched Altamira with its grandiose ideas. Stanley Morrison’s wife is really ticked at her husband. Dorothy Strickland lives across the street from Luke.

Scarlet, Arizona, is…
…where Charlotte moves and works from home as a travel agent. Dr. Dylan Thorpe is the psychiatrist treating Charlotte. The Blake is a restored movie house. Benny was a biker who came to the AA meetings and shared too joyfully. “Thor” and Axel are some of the threatening bikers.

Graydon Pharmaceuticals is…
…part of a consortium. Cole Graydon has taken over his father’s pharmaceutical company. Ed Baker is a former deputy chief for the LAPD and now heads up Graydon security. Dr. Nora Suvari, a Harvard PhD, is the head of gastrointestinal treatments. Tucker Albright, a beef distributor, is the chairman of the board, because he’s chummy with mummy. Cole’s mother has a horse ranch in Rancho Santa Fe. Sunatrex is the new stomach drug that probably represents what most drug companies do for us. Mark Hetherington is a registered nurse and part of security.

Project Bluebird had been…
…a black books drug experiment participated in, funded by, The Consortium.

Dylan Cody has a background as a Navy SEAL, a degree in chemical and physical biology, and a PhD in neuroscience.

Detective Manuel Ramirez is in charge of finding the Mask Maker. Kelley Sumter had changed her name to Harley Grey. Sarah Pratt had been a fitness instructor. Dr. Frederick Pemberton is a plastic surgeon. Denny Bryant is in real estate and runs the Bryant Center, a youth sciences center. Dr. Ella Stanovski works for the Center. Bryant is a donor to Global Healers which visited the Kakuma Refugee Camp in Kenya a few years ago.

Lilah Turlington, a.k.a., Lisa Hilliard, had a son, Noah, and a boyfriend, Eddie Stevens. Cassie Murdoch and Jane Blaire, best friends, were taking a road trip. Jennifer Albright had been a flight attendant. Emily Connolly had been a CPA; Zach Pike had been the man she met online.

Jason Briffel admires the Bannings and has his own dreams for Trina. The Savior is working with Jason. The Mask Maker is the current serial killer, terrorizing L.A. Barry Fitness is a nice gym. Agent Rohm is with the FBI and quite the nasty extortionist. I hope he’ll get his comeuppance in some future story. Jerk.

Daniel and Abigail Banning were serial killers, with sort of a heart. They taught Trina all about the corrupters, living things that tried to steal from them.

Zypraxon is a new experimental drug intended to help with anxieties and mental paralysis. Paradrenaline is a new hormone. Plastination is used to preserve bodies, exposing their muscles, allowing them to be posed and exhibited.

The cover is quietly dramatic with it’s almost silhouette of a desert landscape in the bottom half and a soft sunrise of pale peaches, pinks, and purples…until you notice the eyes in the sky set between the title words which are a gradation of black to sunrise sparkles. The series information is at the top in pale yellow with the author’s information and an info blurb in white at the bottom.

The title is the sound the change makes inside Charley, the Bone Music, that signals her transformation.