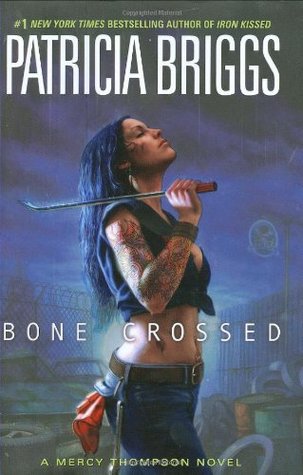 In a world where "witches, vampires, werewolves, and shape-shifters live beside ordinary people" ("Booklist"), it takes a very unusual woman to call it home. By day, Mercy Thompson is a car mechanic in Eastern Washington. By night, she explores her preternatural side. As a shape-shifter with some unusual talents, Mercy's found herself maintaining a tenuous harmony between the human and the not-so- human on more than one occasion. This time she may get more than she bargained for.

Fourth in the Mercy Thompson urban fantasy series revolving around a VW mechanic who happens to shift into a coyote in the Tri-Cities in Washington state. It’s been a week since Iron Kissed, 3. If you’re interested, there is a chronological listing of the Mercy Thompson books on my website.

In 2009, Bone Crossed won the Romantic Times Reviewers’ Choice Award for Urban Fantasy and the P.E.A.R.L. (Paranormal Excellence Award for Romantic Literature) for Best Urban Fantasy Romance, and it was nominated for the Goodreads Choice for Fantasy.

I love this series! The primary protagonist is a strong, independent woman who is loved by a strong, independent man who is also strong enough to accept her as a partner. Mercy will never be the little woman at home. Well, unless she’s baking *grin*. She’s what I like in a heroine. Independent, but she’s also practical about it. She’s so used to being on her own, protecting herself, and it’s hard for her to accept help from Adam. But she does. She recognizes that the battle in the garage last week, the bug-juice he forced down her throat, the choices he made for her were good. And she understands the love behind it.

It’s a warm series with a range of characters from evil to warm and loving. They’re also an independent lot, lol. I do enjoy Mercy’s joke with that junk Rabbit in the middle of the field. Yes, it is about werewolves, and you get to wondering how anyone can twist the trope and make it fresh. And Briggs does it. It’s Mercy who is the twist. Not a shapeshifter, but a walker, a Native American type of shapeshifter who turns into a coyote. The good kind, not the evil kind! She’s the pivot for all the interaction with the werewolves and Adam’s loving her, with the vampires and her powers over them, and the fae. Hey, she’s got Adelbertsmiter in her corner! All these connections leave a lot of room for adventure and fearsome tension.

There’s a lot of talk about the pack bond and how the Alpha feels it, works it. It’s that blood bond Mercy enters into with Stefan that saves her this time. A bond that could turn out badly for Mercy if it’s permanent.

Oh, you’ll want to cry when you read Corban telling Chad how he feels about him. That he was there in the hospital when Chad was born. That he’s his father in every way that counts. The pep talk he gives him. You can only hope they survive this.

Seems Lugh fashioned the walking stick that keeps following Mercy around. The oakman tells Mercy that it follows her because it owes her service, and it likes her.

I did wonder how Zee was going to get around that statement that Mercy would have to repay him immediately for the garage (see Iron Kissed, 3). As Mercy notes, he’s fae, and if he says a thing, it must be done. It’s a clever idea and so very simple.

It’s a difficult time for Mercy, as she’s still recovering from her rape in Iron Kissed. Adam is very careful of her, giving her space, wanting her to accept him as her mate.

Then an old nemesis from the past rises up with a problem. A ghostly invasion of her home. But one that is plotted out beforehand, for Mercy is a treasure he intends to take for his own.

Mercedes “Mercy” Thompson has been an outsider all her life. Unwanted by her mother because she turned into a coyote pup, a walker, in her crib, foreign in a werewolf stronghold, returned to her mother at 16 when she became inconvenient, and smelling the lies of her stepfather and two half-sisters. Always alone. Until Adam. Margi is Mercy’s mother. Hotep is her Doberman pinscher. Curt is Margi’s husband, a dentist. Nan is a younger half sister who’s getting married. The unhappy Samuel Cornick is Mercy’s roommate, an ER doctor, a lone wolf, and Bran’s son.

Adam Hauptman was a soldier when he was changed, now he’s the Alpha of the Tri Cities pack, running a security company, and in love with Mercedes. Jesse Hauptman is his teenage, human daughter. The judgmental (and black) Darryl, mated to Aurielle, a schoolteacher, is Adam’s second. He also has a Ph.D. and works in a think tank. Peter is a submissive wolf old enough to have been in the cavalry, but now he works as a plumber. Ben is an English werewolf sent here after a series of rapes in England. Carlos is another of Adam’s wolves and works in his security business. Warren is Adam’s third and gay. A fact that does not endear him to any of the wolves. Kyle is Warren’s human boyfriend, a lawyer. Paul leads the “I hate Warren because he’s gay” faction. Alec was with Paul and Mary Jo in the bar, although Mary Jo is sweet on Henry. Honey is another wolf.

Bran Cornick is the Marrok, the Alpha of all the werewolves in America. Even those in Europe walk carefully around him. The funny part about it is that Bran looks like a teenager. I have the hardest time blending this image with the role. He is the man, wolf, Margi brought her coyote daughter to, to raise. Charles is Bran’s oldest son and his Enforcer. He’s mated to Anna (On the Prowl, Alpha & Omega, 0.5). Kara is a girl Mercy and Adam sent to Bran to learn how to deal with her wolf.

The Tri-Cities vampires
Stefan is a vampire friend of Mercy’s. He’s one of Marsilia’s lieutenants and was a mercenary in Renaissance Italy. It inspired his nickname, Soldier. As part of her tribute to the vampires, Mercy works on his Shaggy van. The mistress of his seethe is Marsilia, and she is one angry vampire. Seems the hunt in Blood Bound, 2, didn’t finish up as she planned, and now she’s found out about Stefan and Mercy’s true deeds that night. Wulfe, a.k.a., Wizard, is hundreds of years old and looks like he should be in high school. Estelle and Bernard are some of the vampires who aren’t happy about Marsilia coming out of her funk. Lily is the gifted musician who is bug nuts.

The Spokane vampire
That’s right. Only one. James Blackwood. He doesn’t allow visitors. Not pack. Not fae. His nickname is the Monster. Donnall Greenleaf is an oakman who has been Blackwood’s prisoner for some 93 years and eats sunlight.

John is the ghost who haunts Chad, a vampire Blackwood had made. Catherine, a.k.a., Grandmother Death, had made James and then confronted him over a faux pas. So he killed her. Carson Twelve Spoons was the walker Blackwood kept for sixty-some years.

Tony is a police friend of Mercy’s who usually works undercover. Gabriel Sandoval is Mercy’s hired help, a high school student who does Mercy’s paperwork, answers the phone, and more. Tony is sweet on his mother. Gabriel’s sisters will help re-paint Mercy’s garage.

Sensei Johanson is Mercy’s instructor in Shie Sei Kai Kan; by day, he’s an accountant. Lee Holland is in Mercy’s class, and he’s a bully to the women in the class. He liked to hurt them. And he really liked that Mercy had been raped. Gibbs is another brown belt, but a nice guy.

The Fae
Zee Adelbertsmiter is a gremlin who was ordered to out himself by the Grey Lords. Part of the repercussion of doing that ended with Zee selling the garage to Mercy and his retreating to the fae reservation by Walla Walla. Uncle Mike, also called “Green Man”, runs a bar in town for the supernatural. Baba Yaga is one of the Great Ones with a power to heal. Ymir is the snow elf in Uncle Mike’s bar.

Amber Chamberlain had been Charla’s best friend in high school, but in college, Charla had been Mercy’s roommate. She hasn’t liked Mercy since. Amber is now married to Corban Wharton, a corporate lawyer in Spokane. Their deaf son, Chad, is eight years old (he might be ten) and seeing ghosts. Only Chad isn’t Corban’s son, and Corban knows it.

One of the graffiti “artists” is Courtney, Tim’s cousin.

I do like the cover for this one. It’s a pensive Mercedes in profile to us outside her garage in that deep twilight blue of night, her head up, her black hair down, a crow bar propped on her shoulder. She’s wearing hip hugger jeans with a thick leather belt, a wrench dangling from a carabiner attached to a belt loop, an oily red rag tucked into a back pocket, and a very short black blouse tied just under her breasts, the tattoos on her stomach, side, and right arm clearly visible with a nod to her Native American heritage in the feather earring.

The title is what the vampires do in revenge, for Mercy is Bone Crossed. She’ll be lucky to live.