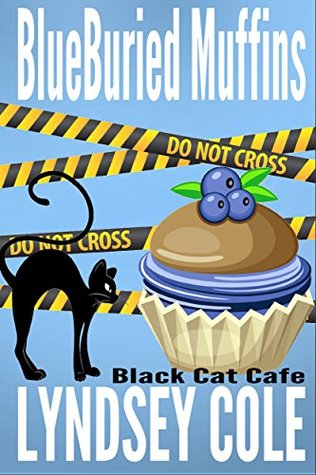 
First in The Black Cat Café cozy mystery series set in New Hampshire and revolving around Annie Fisher, on the run from a scary message.

I do like that title, lol, but I don’t think much of Annie’s loyalty. Look at her reason for abandoning her boyfriend and tell me you don’t agree?

Annie’s reaction to first discovering the body at the café was weird. I’d’ve thought she’d have mentioned her connection to him immediately?? A much more minor conflict is Annie’s hostility towards her mom, quickly resolved, especially when Annie tells her she’s the only one she trusts. What’s with that? Why not trust Leona first? Nor does she trust her old boyfriend, the police chief, as evidenced by her, Leona, Mia, and Martha’s plot to capture the bad guy. Oy, talk about a bad, overused meme!

It’s also annoying that Annie leaps to conclusions so quickly. Oy. Sure, I appreciated how supportive the women characters are of each other, but that support detracts from the story when everything is all too obvious.

Everybody keeps breaking into Annie’s apartment, and she never talks about calling the cops. These incidents barely get a “how rude”. A kidnapper who gives his victim time to collect herself?

Cole did do a good job of keeping me mystified as to what was happening and who was involved in this action-packed story filled with stereotyped characters.

A cute story using third person protagonist point-of-view from Annie’s perspective, but it’s too silly with no depth.

Running home after hearing a mysterious message, Annie Fisher quickly resumes life in Catfish Cove, only to discover that trouble has followed her.

Annie “Red” Fisher is a photographer who’ll be helping her aunt Leona at the café. Smokey is the kitty Annie adopts. Sally is Annie’s beater of a car with 300,000+ miles on her. Her jerk of a dad, Roy, is retired from the fire department. And I’m wondering how he can afford all he owns… Mia is the adoptive mother from whom Annie is estranged. Stella is Mia’s black lab.

Max Parker is the boyfriend from whom Annie fled; he owned an art gallery in Cooper, New York. He also had a son. Vincent West is his partner.

Catfish Cove is…
…Annie Fisher’s hometown where Annie’s aunt “Nani” Leona/Leonia owns and runs The Black Cat Café, Take It or Leave It, and includes a freebrary. The café is part of the Cove’s Corner complex where Jake Wallace is a potter with the shop across the hall, Clay Design, which is next door to The Fabric Stash owned by Martha.

JC is Annie’s oldest friend working at the police station, who’s dating Tyler Johnson, the new chief of police and an old boyfriend of Annie’s. Dylan is JC’s son.

Danny Davis is a handyman with PTSD issues. The mysterious Jason Hunter (he “finds” things) owns an estate that includes Cobblestone Cottage, a rent-free accommodation IF the renter keeps an eye on things. Judge Warren Hunter had his hand in Annie’s adoption records. Leona volunteers at the Second Chance Animal Shelter, which is managed by Karen. Baxter is the dog Leona will adopt; Roxy is a lab-pit mix.

Detective Neil Jaffrey is investigating the art gallery and its owners.

The cover is cute with its pastel blue background. The title at the top and the author’s name at the bottom sandwich a graphic collage of the story with its yellow-and-black crime scene tape crisscrossing in the back, a black cat with his back arched and that very long tail curling over his back, and a cupcake with swirls of blueberry and chocolate icing with three blueberries on top. The series information is in black below the muffin.

I’m guessing the title is related to the café and its baked goods, including BlueBuried Muffins.