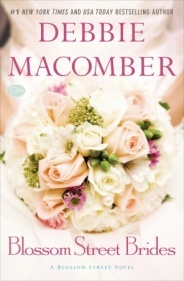 I did receive this as an advanced reading copy.

My Take
It’s a community with everyone having problems, a mother with Alzheimer’s, a foster-care daughter suffering teen angst with confidence issues, exes and the hassles they bring, and children, people, who are making their own decisions.

I’m a bit annoyed that Macomber is perpetuating the cultural expectation of older and younger, however, it is my only quibble in this cozy, fluffy, and sweet romance.

I do have to laugh, we never do seem able to learn from our parents’ mistakes, at least not until we make them all over again…sigh… Luckily, for Lauren she does get her head on straight—before she makes the worst mistake of her life.

It’s a rare story that splits itself off into more than one primary set of characters, and that’s what Macomber has done here. Nor is it an even split with more of the emphasis on Bethanne’s problems with Max and Annie than there is with Lauren and Rooster.

That said, I do like how Macomber rotates us through these different couples’ and families’ lives. I would have preferred a tighter focus on Lauren, but the story doesn’t lend itself to that, and that’s okay. I suspect part of my problem is that I haven’t read any of Macomber’s stories before, let alone any of the earlier Blossom Street installments. I suspect I’d find the peripheral couples are the focus in them and Macomber is keeping us up-to-date on what’s happening in their lives. I do love knowing how “people” I’ve met before are doing!

I love the KNIT ME project! It’s so clever and a great way to foster community!

Grant is such a jerk—and I’m with Max on the most expensive dish for dinner! Although, I don’t get why Max gets so fussy about Grant buying. Max has gotta know how much Bethanne loves him. If he could simply relax , kick back, and laugh at Grant, well, you know what they say about laughter being the best medicine, lol. Max’s jealousy is rather annoying, although I’m also offended for him about Grant. I don’t see why it takes Bethanne so long to get it. I DO think Bethanne should have told Grant she couldn’t do the dinner that weekend. It’s simply part of that jerk’s plans to get her back.

*Laughter*, I do like the interesting start to this hook-up and it proves what an idiot Todd is. I think Lauren is making a very smart decision about Todd. It’s so much better to go forward with someone who wants to step forth with you. Cut your losses and don’t even consider the time invested. It’s not about time. It’s about love and wanting their happiness along with yours. And I love that Lauren looks beneath the surface to the inner man. Where a person’s true worth lies.

What is with Rooster’s sudden oversensitivity? Geez, it’s natural that Lauren would take him to a favorite restaurant. What? She’s supposed to take him to a dive she’s never been to? I read that scene over and over, and I just can’t see where Rooster makes this conclusion. I suspect Macomber just glossed over it and didn’t work it. Then again, I wanna smack Lauren for being such an idjit.

Then that drama with the “blind” Annie…*shakes her head in frustration*. An idiot girl who cannot accept reality while I adore Andrew! He’s perfect in his conclusions and acceptance! I wanna smack Annie upside the head and get her brain to wake up. Of course, that conversation between Max and Grant does make me feel all better…*she says primly…with a grin*…

LOL, I love the Glad game—and it’s true. It works every time!

There are a few info dumps here and there, but it’s mostly good—I did give it a “5” after all *grin*.

The Story
It’s baby dramas that wake Lauren up even as it depresses Elisa and throws Bethanne for a loop.

Meanwhile, A Good Yarn is in trouble—personally and financially.

The Characters
Lauren Elliott has been waiting for that Defining moment for too long. It doesn’t help that Todd is a local and popular newscaster who has been content with merely dating. Carol is Lauren’s younger —pregnant—sister who starts Lauren’s clock ticking. Jason is Carol’s husband.

John Jerome “Rooster” Wayne is a hardlooking, motorcycle-riding businessman who happens to be partners and best friends with Max Scranton.

Bethanne Hamlin Scranton is a successful event planner who worked hard to establish herself when her first husband, Grant Hamlin, aka the jerk, left her after twenty years of marriage. She’s now married to the fabulous Max Scranton, and the only negative is that Max’s wine distribution company is located in California. Yep, it’s a long-distance marriage. Her son, Andrew, is married to the newly pregnant Courtney while Annie is the starry-eyed daughter who thinks her father walks on water. She works for her mother. Monica is Grant’s somewhat secret girlfriend.

Lydia Hoffman owns A Good Yarn, a knitting shop, along with her sister, Margaret. Lydia is married to Brad, a UPS driver and they have a blended family of Cory—Brad’s son with the irresponsible Janice—and Casey, the daughter they adopted out of the foster care system. Mary Lou Hoffman is Grandma. She’s suffering from Alzheimer’s, and the sweet spot is that she always knows who Casey is. Evelyn Boyle is Casey’s caseworker.

Elisa Lipincott, the original owner’s daughter, is married to and partners with her husband, Garry. Together they run John Michael Jewelers where Lauren is employed. They have three children: Katie in her first year at college and twin sons, Tim and Tom. Dietrich is Katie’s very serious boyfriend.

Jordan Turner is the youth pastor married to Alix Townsend, a baker, and they have a toddler, Tommy. Shannon Kidder writes a column for the Seattle Times. Ava is Casey’s friend.

The Cover
The cover is sweetly pink with a close-up, I’m guessing, of a bride and not a bridesmaid holding a bouquet of pink and ivory roses.

The title is quite apt as this story is all about the Blossom Street Brides, whether they’re about to wed, recently wed, or wed for some time.

Review of One Week To Claim It All
Spotlight: Drop Dead Punk
M9B Two for Thursday Book Blitz – The Looking Glass by Jessica Arnold and Of Breakable Things by A. Lynden Rolland with Giveaway #T4T
Release Day Blast: Cuba Undercover
#COYER UPDATE: Week 3
The Week In Review #45