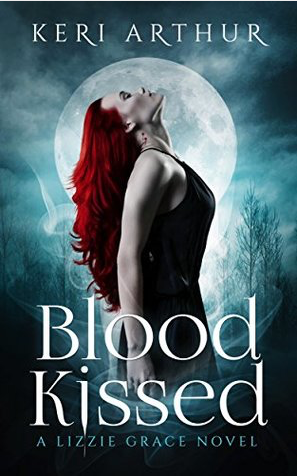 First in the Lizzie Grace urban fantasy series and revolving around a witch who wants nothing to do with her magical, blue bloodline.

This was fun! Lots of action and lots of sneaky teases. I’ll have to read Hell’s Bell to find out how Cat died, if Lizzie’s power is stronger than she thinks, what’s going on with the wild magic, and where Gabe is…or perhaps it’s more about Katie…? Inquiring minds just gotta know!

It’s a cozy enough beginning that starts the story crisis up while setting Lizzie and Belle up with their troubled past. Arthur uses first person protagonist point-of-view from Lizzie’s perspective, so all that we know is from what Lizzie sees, feels, observes, and thinks. And that is quite a bit. Arthur really does a great job on providing back history and background information (without dumping!) through Lizzie, and her “thoughts” are quite natural without that repetition some authors can’t resist.

I love the relationship between Lizzie and Belle, and Arthur provides enough background that I felt as though the girls had grown from their original start. The growth continues with that angry introduction of the werewolf ranger whose own issues Arthur draws on and out until I’m ready to hit someone.

It’s truly tricky, because I suspect the reasons for his anger are based in the marvel that Lizzie faces in the park.

God forbid we should only have the story tension with that crazed vampire, so Arthur throws in all of Lizzie’s fear of what could happen if her family finds them. Whew, I’m tellin’ ya…Arthur has so much material to draw on that the next one oughta be a pip.

It’s a furious mother who insists Lizzie hunt down the bastard who stole her daughter. No matter that witches are banished from the reservation, and the rangers have forbidden Lizzie from interfering, the mother is a powerhouse in town and could make life untenable.

Of course, that’s nothing compared to what a blood-magic-using rogue vampire will do!

It’s a hunt that soon becomes personal, and one that is going to take all her skills to survive — that’s if the werewolves, who hate all things witch, don’t get her first.

Lizzie Grace, born into the Marlowe blueblood line of witches, has constantly let her family down, as she is so out-of-the-norm and weak in her magic — being strong in psychometry in “not adequate”. Cat is the sister who died twelve years ago, and Lizzie and Belle had been on the run ever since. The psychic Isabelle “Belle” Kent (from that lowly Sarr bloodline, although her Gran had some amazing books!) is Lizzie’s closest friend and her human familiar with constant access to Lizzie’s thoughts. Lizzie’s real parents are part of a handful of witches who are the most powerful in Australia. Julius “Juli” is Lizzie’s smug brother. Supposedly the psychics, Kate and Lance Grace, are the “parents” of Lizzie “Grace”.

…the “witch-free” capital (that is filled with wild magic) of the Faelan Reservation, one of seven werewolf reservations in Australia. Gabe, the last witch, had his residency revoked. He had replaced Tarkan.

The Psychic Café…
…is the business that Lizzie and Belle have opened in Castle Rock, offering psychic readings as well as the usual fare. Penny is a waitress. Mike is the chef. Frank Reuben is the kitchen hand.

Aiden O’Connor is the head Ranger and quite prejudiced. Ciara is his sister and the coroner. Katie was their youngest sister. (The O’Connors were one of the original occupiers of the land.) The Rangers are always werewolves elected by the elders and include Tala Sinclair, Aiden’s second-in-command; Duke; Jaz; Mac; and, Byron. Maggie is the receptionist and a ranger-in-training.

Marjorie Banks is an attorney-at-law who wants a reading about her missing daughter, Karen. Jason is Karen’s boyfriend. Phillip Banks is Majorie’s ex. René Marin is reworking an old gold mine. James Maldoon. Mary Jones had run with a bad crowd back in the day, one that included Marjorie and Morris Redfern (he and his wife, Emma, just buried their sixteen-year-old son, Mason, thirteen days ago). Frieda Andersen is the girl who was bullied. Jenny and John Andersen were her parents. Mrs. Williams is a customer at the café; Freddie is her husband. Rosie has dementia and is confused about which psychic can’t find her ring.

The old Richards Road Hotel is now a themed nightclub called Émigré. Zak Marin, a werewolf, is one of the bartenders and works as a handyman during the day. Maelle Defour is the owner and a vampire. Her Defour lineage was cursed by a long-ago witch of the Marlowe line.

The Interspecies Investigations Team (IIT) is…
…something of a paranormal FBI with John Hart and Terry Blume as condescending agents.

The Regional Witch Association keeps…
…an eye on witches in the area. Anna Kang is a TWA representative.

Tomme (Frederick Waverley was his human name) is a vampire using blood magic, unclean and soul-staining.

There are six lines of witches: three are considered royalty (Marlowe, Kang, and Waverley) and the other three commoners (the Sarrs and the Fitzgerald line who are no more than carnival fortunetellers and tricksters are two of the lowly). The government requires that a witch be present on all reservations to serve as the government liaison and rule enforcers. A familiar monitors and protects its witch as well as acting as a lifeline of strength. Witch script is an ancient text that can only be read by blueblood adepts. Witch magic relies on the strength of the witch and the energy of the earth. Wild magic comes from the deeper recesses of the earth. The High Ridge Massacre wiped out an entire town in one night, all due to a wellspring that was sucked into evil.

The registrar is an organization that holds the records of every vampire created and can track them.

Kyle was a mistake in Birdwood. Jake is a surfer in Coolangatta. James Barton had been a baker. Beans and Greens is a small café in Bendigo.

The cover is simple yet compelling with a black and blues cloudy night and wisps of wild magic rising up from the dark forest. It’s Lizzie in profile with her head of long, wavy, crimson hair thrown back as though she were howling at the full moon that rises behind her. It’s a subtle nod to the werewolves as well as acknowledging its own influence on her magic. The author’s name is centered at the top in white with white in the title at the bottom, crossing Lizzie’s hip. Beneath that is the series information in a light blue.

The title, Blood Kissed, refers to the signs that a person has shared the blood of a vampire.