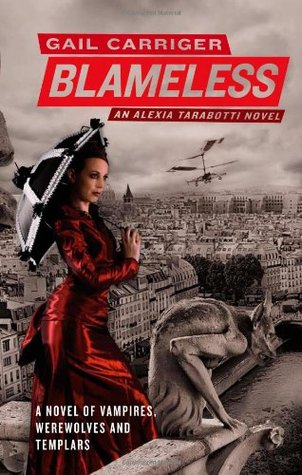 Third in the Parasol Protectorate steampunk series and revolving around Alexia, Lady Maccon, a soulless preternatural.

In 2013, Blameless won the Prix Julia Verlanger and in 2010, it was nominated for the Goodreads Choice Award for Paranormal Fantasy.

I enjoyed this installment even though it felt a little too easy. The whole steampunk flavor is great fun [gadgeteers unite!], and I do enjoy how Carriger pulls in the mores of the time period as she has fun with them. Yet, it was a bit flat. Just tiny bits of danger that didn’t feel quite real. No real challenge in this, even if Carriger is so dang funny and writes with such wit and intelligence! And her use of metaphors is fabulous: “London sky … its customary stance halfway between an indifferent gray and a malnourished drizzle”. She is such a treat to read for her use of words and the twist she puts on vampires and werewolves with their very different cultures, their interactions, and now the baby with the complication it brings.

Okay, it’s not alcohol Conall has been imbibing, and my taste buds are absolutely gagging. His going off the rails also requires Professor Lyall to do a lot of metaphorical tapdancing, political thinking, and dueling. He rather likes his Alpha, and there is a lot of love in Blameless. Lord Akeldama shows his love for Biffy while Major Channing Channing totally surprised me with his taking off in the night. There is also the love that develops between a mother-to-be and her child.

Carriger also beautifully shows Alexia’s feelings about Conall, as she veers between anger, unhappiness, regret, and humiliation. Conall’s reactions are also real and way too appropriate to his character, lol.

I adore Alexia as a character. She’s upright, forthright, and extremely well mannered; Carriger notes that being a preternatural normally predetermines that one will be absolutely nasty and without morals as they have no soul. Alexia, however, has taken refuge in manners and proper conduct. Add to that her uncaring attitude about her love for eating and lack of concern for what society says, and you’ll adore her too.

Part of Alexia’s problem is her and her child’s preternatural state. No preternatural can stand to be within the proximity of another.

Lord Akeldama does like bestowing nicknames on people. And poor Professor Lyle becomes “Dolly”. Conall gets his bit in at the end about the “pack” Alexia built, her Parasol Protectorate. Those idiotic half-sisters and their mother are the most gawd awful foil to Alexia’s intelligence while the squire is something of a lump. Even worse is “the little German”. What. An. Obnoxious. Disgusting. Man!!

Oh-ho, we learn something quite revealing about the foolish-seeming Ivy Hisselpenny Tunstell. Although, thinking of Ivy being in charge of Madame’s hat shop has me spinning in horror; I can’t even begin to imagine how awful it’s making Genevieve feel, ROFL.

I am so with Alexia on the matter of pesto. I absolutely ADORE it.

It’s a scandal! An absolute scandal! And how can the Misses Loontwills bear the shame…?!

“‘…a werewolf fathering a child is like a vampire or a ghost producing offspring — patently ridiculous.’

‘Well, so is this family, but you all appear to exist in accordance with the natural order.'”

Fortunately, they won’t have to as Alexia retires to Lord Akeldama and his townhouse.

But even this refuge is denied her, for Akeldama has swarmed, and Alexia is under attack by the vampires. It is the worst time for Alexia to have lost the protection of the Woolsey Pack.

It’s a terrifying situation that will require Alexia, Madame Lefoux, and Floote to travel to Italy to learn what they can from the antagonistic Templars and evade vampire assassins. The one truth all the scientists and Templars agree upon is that it is not a question of if Alexia will lose the child, but when.

The witty Alexia, Lady Maccon, a patron of science known for her intellectual prowess, is unexpectedly pregnant and living in her mother and stepfather’s house, having been tossed out on her ear from Woolsey Castle. The spiteful Felicity and Evylin are her mentally challenged half-sisters known for their puffed sleeves. Mrs. Leticia Loontwill is the idiot mother. The Right Honorable Squire Herbert Loontwill is all for a quiet life. Swilkins is the new butler who replaced Floote.

Lord Conall Maccon, the Earl of Woolsey, is a peer of the realm, the head of BUR, and the Alpha werewolf of the Woolsey Pack who has managed to get himself pickled, blotto, stewed, lubricated, sozzled. A truly miraculous state considering his werewolf state prevents his being able to get drunk. Supposedly. The gay Lieutenant Colonel Professor Randolph Lyall is his extremely competent Beta who believes Alexia; he’s also an amateur ruminantologist. Floote had been manservant to Alexia’s father (that infamous blackguard, Alessandro Tarabotti), then the Loontwill butler, and is now Alexia’s personal secretary and librarian at Woolsey.

“‘Pregnancy, under such circumstances, you must understand, is not possible.’

‘Certainly not for you, my lord.'”

The Bureau of Unnatural Registry (BUR) is…
…the law enforcement branch for supernaturals with Lord Maccon its head and the kingdom’s chief sundowner. Sandalius Ulf, a barrister from Devonshire, is a pack challenger. Mr. Haverbink is one of their best agents; Mr. Phinkerlington is another agent.

Lord Akeldama is a rogue vampire, an arbiter of fashion with his own court of drones, and one of Alexia’s favorite friends. Biffy is Akeldama’s favorite drone. Emmet Wilverforce Bootbottle-Fipps, a.k.a., Boots (for obvious reasons) is a new boy.

The tasteless Ivy Hisselpenny (Alexia’s best friend) and her new husband, Ormond “Tunny” Tunstell, a former Woolsey claviger, are in theatricals. Tunny is a rising star on stage.

The Westminster Hive is…
…a London-based vampire headquarters led by Countess Nadasdy. Lord Ambrose is one of her advisors and very much against Alexia. Miss Mabel Dair is a famous actress as well as a drone. The vampires have ordered a death bite on Alexia.

Paris
Gustave Trouvé is Madame’s “cousin’ and an inventive clockmaker; they attended École des Arts et Métiers together. Hortense had been his wife. One of his clients, a Mr. Beauregard, commissioned some mechanical ladybugs from him.

Nice
Madame Lefoux knows of Mr. Lange-Wilsdorf, a fellow Brass Octopus member who has studied the preternatural for years, through Algonquin Shrimpdittle. Also known as the little German, Lange-Wilsdorf is fascinated at the idea of the Female Specimen. Poche is the name of his featherduster, er, I mean, dog.

The Knights Templars are…
…hypocritical warriors based in Florence, Italy, who fight against all super- (and preter-) naturals, hunting them down, treating them like animals. They see Alexia as a demon.

Captain Featherstonehaugh was Evylin’s fiancé; he gets engaged to Miss Wibbley; she and Miss Twittergaddle are Felicity’s twitterpated friends. Lady Blingchester and her daughter have decided opinions on morality. Mr. MacDougall is an American scientist studying the soulless who owes Alexia a favor (Soulless, 1). Sir Francis Galton is interested in eugenics, a purist. Zenobia, Queen of the Palmyrene, was the last soul-stealer of whom Lord Akeldama knows. Also known as a flayer, a preternatural who can borrow the seeming of another supernatural. The Order of the Brass Octopus is a club for scientists.

The Shadow Council is…
…made up of three positions: the muhjah is filled by a preternatural who can also act as a field agent; the werewolves are represented by a dewan, the Earl of Upper Slaughter, a loner, commander-in-chief of the Royal Lupine Guard, a.k.a., Her Majesty’s Growlers (Conall calls him “Fluffy“); and the vampires are represented by the potentate, the premier rove in England and Queen Victoria’s chief strategist, Sir Francis Walsingham.

A sundowner is a weapon, both material and living. It/he is an officially sanctioned killer.

The cover finds Alexia, standing in her trademark S-posture, wearing a vividly subdued claret-colored taffeta fitted gown and holding a black-and-white parasol over her shoulder. Alexia herself is standing on the rooftop with the Paris skyline beneath her, a gargoyle in front of her, and an ornithopter hovering over the city. The author’s name, title, and series information are in motion at the top of the cover with empty fonts that reveal the skies behind them and banners of rust, orange, and a deeper rust serving as reliefs.

The title is what Alexia is, Blameless.