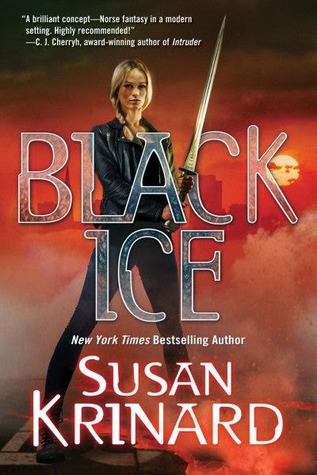 
Second in the Midgard mythic urban fantasy series and revolving around Mist, a Valkyrie battling against Loki’s machinations on today’s Midgard.

I see Black Ice as a bridge spanning events in Mist, 1, and what I suspect is to come in Battlestorm, 3. Mostly due to the story setting everyone up, and I suspect introducing the final characters who will be in at the end. It has a most twisty plot with so many of its characters having their own even twistier agendas, as they get ready for Battlestorm.

Mist is gathering her allies while losing some. There are betrayals and exposures on both sides, even as both sides race to collect those plot coupons. There are tears, shock, and some laughter as we hear from all the characters in this third-person omniscient point-of-view, learning of the past and plans for the future.

Or so she thought.

The trickster god Loki has reappeared in San Francisco, and he has big plans for modern-day Earth. With few allies and fewer resources — but the eyes of the gods and goddesses of an old world upon her — it’s up to Mist to stop him before history repeats itself.

Mist Bjorgsen is a Valkyrie, the daughter of Freya and a Jotunn, the only survivor of a battle waged centuries ago. Kirby is her kitty. Kettlingr is her sword. Gungnir is Odin’s spear, one of the Treasures given to Mist to guard. Silfr had been her horse when she still lived in Asgard.

Gabriella “Gabi” Garcia has curandera magic. Ryan Starling, who has inherited from his aunt, Mamie Starling, is subject to seizures during which he has visions. Mother Skye wants to teach Ryan. Koji Tashiro is a lawyer.

Dainn Faith-breaker is an Alfr betrayed by a godling. Repentant, and in love with Mist, he is possessed by a beast who is the mirror image of Fenrir.

Her sister Valkyrie, Bryn, leads a motorcycle gang, the Einherjar, who include Vixen, Rick Jensen is her lieutenant, Bunny, Tennessee, Edvard is a berserkr, Fatty, Headlights, Harry Lime, and Roadkill — all riders who sensed the changes in the air. More of Mist’s Sisters include Eir, a.k.a., Erin McLoughlin, who grows apples in the desert; Sigrun, a.k.a., Maria Simona, is a nun with the Sisters of Santo Gaudentio in Italy who holds Gleipnir, the chain that binds the Fenrir Wolf; Regin is the guardian of Mjollnar; Rota is in Brazil and the Valkyrie assigned to guard Jarngreipr, the iron gauntlet; and, Hild rides Spider.

Anna Strangeland is a computer programmer who dreams of the past. Orn is a raven who looks like an African Grey parrot. Oldefar. Geir and Helga, a.k.a., Horja, Anna’s great-grandparents, had adopted Rebekka Forren, Anna’s grandmother. Ms. Hudson is Anna’s neighbor.

The Æsir and Vanir are…
…the Norse gods. Freya, the goddess of love and material things, is mated to Odin; while a Vanir goddess, she is also an honorary Æsir. Odin the All-Father is the head god. Geri and Freki are his wolves; Huginn and Muninn, Thought and Memory, are his ravens. Thor is the god of thunder with his great hammer, Mjollnir, and his Belt of Power, Megingjord. Bragi is the bard of the gods. Vidarr is Odin’s less pleasant son, the Silent One. I think the Asbrew is Vidarr’s bar. Vali, Odin’s son, is also half-Jotunn.

Ginnungagap is the Shadow-Realm of the gods and is located in the Void; Eitr is the substance of the Void. Freya’s Falcon Cloak is another of their Treasures. The Ulfhednar and Bjorhednar are berserkir who fought in the ancient battles. Ragnarök is the battle that will end all the worlds. Midgard is earth.

The Alfar are…
…elves. Eyfrith is the High Lord of the Alfar. Lord Konur is one of their leaders. Hrolf has volunteered to go to Norway. Skolmr is a kidnapper. Harald is allied with Freya.

Loki Laufeyson is the trickster god, a.k.a., Mr. Landvik, the Slanderer, Lukas, Deceiver, Scar-Lip. Loki’s children include Jormungandr, a massive serpent; Fenrir Wolf, a.k.a., Fenrisulfr; Sleipnir, Odin’s eight-legged horse; Hel is the goddess of the dead; Narfi; and, Danny, an autistic little boy with a gift. Miss Jones is Danny’s terrified nanny. Nicholas and Scarlet are his personal assistants, in bed and out.

The Jotunar are frost giants; ividyur are giantesses. Hymir is the new chief of giants. Grer, Ide, and Haurr are some of Loki’s lieutenants; Hringrimir had been one. Amgerd and Suttungr have been waiting on the other side of the bridge. Svardkell.

Bikers are another part of Loki’s army and include Barker, Nacho Chavez who had challenged Loki one too many times, and Ramón Garcia.

Eric. Senator Briggs is being blackmailed by Loki. Captain Taylor is with with US Marine Corps.

The cover has a gradated black to red of smoky mists, a full moon tucked behind the title which is an ice-filled script, outlined in white and black. The author’s name is in white at the bottom. It’s Mist, all in black, her blonde hair in a single braid over her shoulder, her sword held upright in both hands, legs spread, staring out at us..

The title is the Black Ice that Loki conjures up.