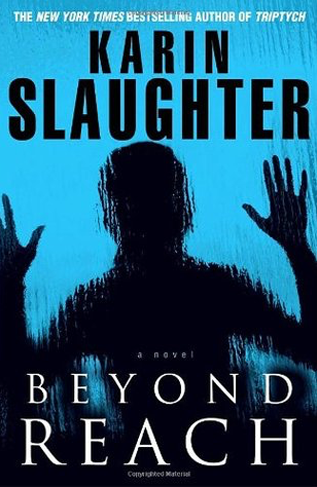 Sixth and last in the Grant County thriller series revolving around Dr Sara Linton and her husband, Police Chief Jeffrey Tolliver, and one of his detectives, Lena Adams.

Ah, jesus. I wish I’d never started this series. That ending. Ah, jesus. When I first started Grant County, I loved it. It was so homey and small-town with some fascinating characters. By the time I finished the series, it had gone progressively downhill in terms of grimness. Slaughter’s writing is great! But I get too involved in my characters and their lives…and I’m still crying.

It was a difficult read tension-wise, as I couldn’t figure out where Slaughter was going with the story, as she ducked and wove back and forth in time, dribbling out those red herrings, tossing in the misdirection. Too, Slaughter had started at the end of the story, leaving me too involved with a need to know how it got to this point; I needed to know why, who dunnit…

The beginning of the story certainly didn’t help, as Sara’s professional life is being destroyed. It dragged a bit, heightening the tension, killing me with wanting to know what was happening. And I never saw it coming.

Using third person multiple point-of-view means we got to see what was happening from Sara’s, Jeffrey’s, and Lena’s perspectives, and Slaughter does a great job of keeping us unbalanced about Lena’s reasons, with the one bright note of Sara realizing how much she loves Jeffrey, how much he’s grown up in the past ten years.

There are so many unexpected truths that end up being revealed. Jesus. So many that your feelings about the various characters — especially Hank! — will get flipped over end over end.

Detective Lena Adams is under arrest for murder, an arson fire that burned a woman to death. And she isn’t talking. She is, however, escaping.

Sara had thought heading to Reese with Jeffrey would be an escape from her own problems, a vicious downward spiral so directly opposed to Sara’s past.

The players are vicious, but they made a mistake going after Hank.

Dr Sara Linton is the resident medical examiner and pediatrician who remarried her ex-husband six months ago. Tara is her sister and working as a counselor for homeless people in Atlanta. Eddie and Cathy Linton are her parents and on a two-month trek across America. Emma “Granny Em” (her maternal grandmother) had been all in favor of women going to college, in spite of her time.

Police Chief Jeffrey Tolliver finally won back his sweetheart, and they’re getting ready to adopt a child. Detective Frank Wallace plans to retire in a few weeks.

Detective Lena Adams is her own worst enemy. Jeffrey is her boss. Sibyl is the blind twin sister murdered six years ago at the start of the series in Blindsighted, 1. Nan Thomas, the college librarian, had been Sibyl’s lover and later, Lena’s support. Calvin Adams, their father, had been a cop killed during a traffic stop.

Ethan Green, a.k.a., Ethan Allen White and Ethan Allen Mueller, was the controlling jerk of a “former” neo Nazi and Lena’s former boyfriend now in Coastal State Prison, leading his own vicious gang and where Applebaum is a guard. Evelyn Marie Johnson had been Ethan’s black girlfriend who was murdered horribly. Greg Mitchell became Lena’s boyfriend again.

…the incredibly poor county seat for Elawah and Lena’s hometown where her uncle Hank Norton lives, their sainted mother’s brother, a drug addict who barely kept it together. He owns a bar in Reese. Their mother, Angela Adams, had died shortly after giving birth. The Harley-riding Deacon Simms had been Hank’s bartender for over thirty years.

The Reese PD
Sheriff Jake Valentine is too young to be in charge, having been a deputy for all of two days. Myra Fitzpatrick is his loved wife and a schoolteacher. Jake’s baby brother died of a drug overdose; another brother, David, had been killed in a knife fight. Donald Cook is one of the sheriff’s deputies, not too bright and quite unaware. Al Pfeiffer is the former (perverted) sheriff who quit after his house was firebombed.

Charlotte Warren Gibson is Hank’s neighbor; he’s her AA sponsor. She’s married to Larry Gibson who loves and adores her, and they have three children. Fred Bart, a dentist, is the coroner. Judge Avery. The Elawah County Hospital is where Darla is a nurse, and the Adamses spend so much time. Ben Carver had been Lena’s first. Mr Barnes owns the busy Home Sweet Home Motel; Junior is a night clerk; and, Rod is on days. “Swallowin’” Sue Kurylowicz is the assistant principal at the school. Joseph Smith is the CEO and president of Whitey’s Feed & Seed.

The Brotherhood of the True White Skin is…
…a neo-Nazi organization headed up by Carl and Jerry Fitzpatrick. Jeremiah Todd had been its founder and a Holocaust denier, in spite of having helped liberate Dachau. Boyd Gibson took a bad turn, partly due to the abuse he suffered as a kid from his father, Grover; Ella had been their abused mother. Clint Jones is a thug and Jerry’s man. “Harley” appears to be one of the masterminds.

…the town in which Sara’s clinic and the police station are based. Buddy Conford is Sara’s personal lawyer and Melinda Stiles is counsel for Global Medical Indemnity. The Grant Institute of Technology is the local college. Clem Waters had been the mayor of Heartsdale years ago.

The Heartsdale Children’s Clinic is/was…
…Sara’s practice. Nelly Morgan is the office manager. Beckey and James Powell’s son Jimmy died of leukemia. Sharon Connor is their shark of a lawyer. Dr William Harris, a friend of Sara’s, is an oncologist in Atlanta.

Nick Shelton is an agent with the Georgia Bureau of Investigation and a friend. Bob Burg is a former agent, squeezed out by budget cuts. Amanda Wagner is a hostage negotiator.

The cover is stark with a metallic silvered blue background and a wavery black silhouette with has his hands and body up against the rain water glass, conveying fear and the unknown. A white info blurb is at the very top. The author’s name is in an embossed black just beneath it. At the bottom is the title, also embossed and in white.

The title is a fatal warning for Hank, Lena, Sara, Jeffrey, for all of us, it’s all getting Beyond Reach.

2 responses to “Book Review: Beyond Reach by Karin Slaughter”