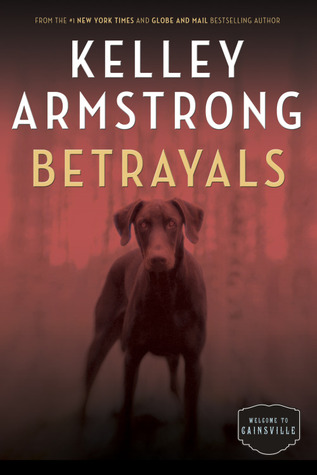 Buy on Amazon
Goodreads
Also in this series: Portents

Fourth in the Cainsville urban fantasy series and revolving around Olivia Taylor-Jones, Ricki Gallagher, and Gabriel Walsh, caught up in a neverending cycle of love and betrayal among the fae.

You know, it took four books before I wondered about “Caine” and “Cainsville”. Ya reckon there’s a connection??

The immediate conflict in Betrayals are the murders, which ties into the overall series conflict of Matilda needing to choose between Cŵn Annwn and Tylwyth Teg, between Arawn and Gwynn, deciding who will thrive and who will not. It’s a conflict that becomes so much more interesting in the characters of the two men, of their determination that this reincarnation will be different and yet caught in their past actions.

Ricky is amazingly noble in how he sees his relationship with Olivia, and it makes me want to cry. It’s reinforced by Rose’s reading, as it shows him evolving, and that’s true enough, especially in that scene with Ioan, with the choices he’s making.

As for Gabriel, whoaaa, in his guilt he’s making some radical choices himself. Choices that have me veering between, yep, wanting to cry, and cheering. He wants a relationship with Olivia, but can’t get past his emotional defenses. And ooh, baby, does she ever call him on it, on his cowardice! And the visions help her make her point of those “variations on a theme”.

Nor are my emotions helped by those cryptic comments he makes about his childhood. His drug-addicted mother, his absentee father, the lack of any security in his very young life.

The two guys? Searching for proof of okay? That is so not how I would expect muggers to act.

I’m so conflicted about Pamela. She’s hard, she’s determined, she will do whatever it takes to “save” her daughter. I can understand that. I can even understand (and truly empathize with) the bargain she made with the Wild Hunt. But dang, she is hard.

*Snicker*, I did enjoy Olivia standing up to Melanie’s demand. And she’s perfectly right!

It’s a pip of a series and incredibly complex in its twists and turns with those slow reveals — if you haven’t been reading it, get going! This one is a buy in my book.

“To live is the rarest thing in the world. Most people exist, that is all.”

AND, I wanna kill Caine for that ending!!! It’s gonna be another year before Rituals comes out! Hmmm, you may wanna wait…*grrr*…

It began in friendship and ended in rivalry for Matilda’s hand in a secret pact between Arawn and Gwynn. A pact that doomed them all. Now both sides compete for Matilda, for their very survival depends on her.

Olivia, Ricky, and Gabriel are determined to break the cycle, to not repeat the mistakes of the past, but their history is conspiring against them.

Olivia Taylor-Jones, the former Eden Larsen, is plagued with visions and is the reincarnation of Matilda of the Night, a Mallt-y-nos, who had been a witch with both Cŵn Annwn and Tylwyth Teg blood. TC is her cat in Cainsville. Pamela Larsen is her birth mother, who is in prison for serial murder. Todd Larsen, her birth father with Cŵn Annwn blood, is also in jail.

Ricky Gallagher is the heir to his father’s motorcycle gang business empire, Satan’s Saints, and is getting an MBA. He also has Cŵn Annwn blood and is the reincarnation of Arawn. He and Olivia are a couple. Don is his father.

Gabriel Walsh is a shark of a defense lawyer with deep emotional issues and employs Olivia as a private detective. He’s the reincarnation of Gwynn ap Nudd, King of the Faeries, the Tylwyth Teg, the Welsh fae, and the third in the romantic triangle of Arawn and Matilda. Rose Walsh, Gabriel’s worried aunt, is a psychic and con artist, true to her Walsh roots. Lydia is Gabriel’s human assistant.

Cainsville is…
…a Tylwyth Teg town that grudgingly allows Ricky in. The Carew house was Olivia’s great-great-grandmother’s home. Grace, a bogart, is Olivia’s landlord in town. Patrick, a 300-some-year-old hobgoblin, a bòcan, is the town’s resident romance novelist; one of his pseudonyms is Patrice Rhys. He’s also Gabriel’s father, which he had been at pains to hide. Ida Clark is the de facto leader; Walter is her husband. Veronica is another of the village elders. Larry Knight is cook and owner of the Corner Diner where most of the town interaction takes place; Susie is a waitress there. Webster is the town doctor.

Olivia’s visions…
…take her to the far or near past. The lamiae she sees include Anna, Dami, and the nameless ones kept prisoner and used. The visions also include the trio’s past lives from their original childhood to various reincarnations, including Alice, Peter, and Carl. Ricky has one when he appears to be a Michael O’Grady. Other visions show Olivia of past deals the Hunt has made. Or not, as John Miller learns.

The Cŵn Annwn, is the Wild Hunt…
…the Huntsmen, who are responsible for bringing those with fae blood to justice or to provide them with vengeance. They may not touch humans who commit crimes, but will make bargains with others to kill them. Ioan is the leader of the local Hunt and head of Gwylio Consulting, a security firm. He’s also Ricky’s grandfather. Brien is the alpha of the Hounds.

The Lamiae are…
…half-snake female fae who need to devour life force for their sustenance. The girls are aided by Aunika Madole, Lucy’s sister, who runs an outreach center for teen prostitutes. Erin is her helper. Some of the lamiae include Melanie, Lucy, Rina, Steph, the broken Pepper, and Damara “Dami” who loves Toby.

Ciro Halloran was married to Dr. Lucy Madole, who was murdered. Seems both come from samhail families.

Pamela arranged for the murder of James Morgan, Olivia’s ex-fiancé. She set it up with Tristan Crouch, whom she framed along with Gabriel. Imogene Seale is the missing witness who knows the truth about those first murders.

The Huntsman is strong in his evil. Fwnion is the Hound who is broken and becomes Lloergan.

Detective Amos and his partner are jerks. Matt is a barista at Olivia’s favorite coffee shop.

Boinne-fala means a drop of the Old Blood, a disparaging term among the fae. Disgynyddion means descendant while epil means offspring. Mhacasamhail is Gaelic and refers to human families who have made a deal with a fae family to serve them in a symbiotic relationship. Samhail is the American term for the same deal. A coblynau is the Welsh version of a tommyknocker, hardworking and kind-hearted. Leprechauns are real, but it’s not a pot of gold they give. Rose’s reference to Daniel Dunglas Home is to a spiritualist in Arthur Conan Doyle’s time.

The cover is scary and benign. I know, it makes no sense. It’s a deep, deep red horizontal gradient with the “lightest” red in the center. Just enough light so you can see the black Hound facing you, staring at you. The author’s name and title are embossed in silver and gold respectively. I do love the series information in the bottom right corner. It’s one of those “welcome to…” signs, greeting your arrival in Cainsville.

The title is Betrayals, and yes, there are many a’many of those in Cainsville…