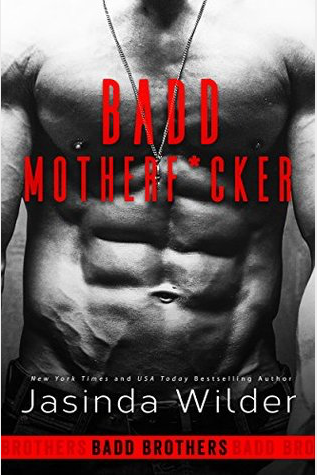 
First in the Baad Brothers sexy romance series set in Ketchikan, Alaska, and revolving around eight Baad brothers. The couple focus is on Dru Connolly of Seattle and Sebastian Baad.

Wilder sets the suspense up from the start of this tale of know thyself and rolls on into comedy with a multiple first person point-of-view. Dru starts it off with all those thoughts and reassurances in the lead-up to her wedding day and then swaps back and forth with Bast. It’s much later in the story that Zane slips in with his own first person POV, as Wilder does the set-up for his story in Baad Ass.

I like and don’t like Dru. I like that she’s strong, can take care of herself, and has such a great dad. What I don’t like is how stupid she gets: her sudden reality check (but Wilder doesn’t have Dru even consider her departure from her sane, logical self and this particular predicament), her reaction to Allie (when she’s the one who’s been such a prick tease!), and that tired emotional plot device affecting the one-night stand.

Now Bast, in spite of his insta-love which didn’t ring true for me, was a sweetheart when it didn’t matter. Okay, I’m saying that wrong. At the start, Bast was perfect, a sympathetic, empathetic gentleman until he got too involved. Then he lost his gift of gab.

Lots of niggles. Why would Bast sabotage himself by not hiring people? If his bar is going under for lack of employees, hire them! As for their dad’s will. Okay, the residence and labor requirement seem fair. For Bast. It was nasty on their dad’s part when it comes to a few of the boys, although Wilder resolved this too easily. As for the money they inherit. That’s all? And I agree that Bast got shafted. Why hadn’t Dru already moved her stuff into Michael’s apartment? What was with Bast’s reaction after their eight hours of passion? His previous declarations? It came out of left field!

I will admit I was awful pissy about the division, but later decisions made up for my pissiness. It was also toward the end, that the story redeemed itself with Michael explaining himself, and Dru coming to some unwelcome realizations of her own.

I thoroughly enjoyed Bast’s brothers’ reactions and their comments to him. Right on the nail, lol! It’s pretty rare to find one guy who comprehends the emotional and mental issues of others, but seven of ’em? The rest of the stories in Baad Brothers ought’a be real interesting *she says with a grin*. I did appreciate Wilder’s description of how loss affects a family and what a parent’s neglect forces on the kids — and the generous nature of Bast’s brothers.

As for Michael, I sure hope he intends to pay for that wedding. Although it is the wedding at the end that I truly adore with all those bridesmen, lol.

All in all, I enjoyed the brothers, but know that the story is all sex tied together with bits of plots.

She can’t do it. She simply can’t face all the familiar places, and Dru hightails it out of town aboard a floatplane — in her wedding dress. It doesn’t matter where it’s going, as long as it’s not Seattle!

Yep, this ain’t Seattle, and the only lights visible are coming from some divey bar. One with a really cut and cute guy. A baad boy with smooth moves.

Dru Connolly has a law degree and is the only daughter of Drew Connolly, a former USMC drill instructor and a detective with the Seattle PD. Mom left when Dru was eleven, and she and her dad have done everything together. Drinking. Shooting. Martial arts.

The tongue-tied Sebastian “Bast” Baad is the oldest of eight brothers and is struggling to keep his dad’s bar, Baad’s Bar & Grill, from going under. Their mother died when Bast was seventeen. His brothers include Zane, a Navy SEAL; Baxter plays semi-pro football in the CFL and may be going pro; Brock is a stunt pilot; the rock ’n roll star twins, Caanan and Corin; the introspective Lucian; and, the too-too brilliant Xavier attending Stanford on a full-ride scholarship thanks to soccer and academics.

Michael Morrison is Dru’s fiancé and works for Amazon in marketing. Annie, Lisa, and Lisa’s single friend Tawny Howard (she’s paired up with Michael’s cousin) are Dru’s bridesmaids. Eric and Lisa’s husband Nate, and Tony (the cousin) are the groomsmen, respectively.

Richard Ames Burroughs is the snooty and persnickety attorney. Billy Price had been the handsy teenager. Allie is a former one-night stand who wants more. Bruce flies a really broken-down plane. Marco (Zane’s best friend) and Cody are friends stationed in Afghanistan. Baldwin is Baxter’s coach. Mara Quinn did three tours as a combat medic.

The cover is black and white with the title, centered over Bast’s naked, ripped eight-pack, and the narrow band spanning the bottom as a background for the series information (in black), in red. The author’s name is in white against a black background that lightens up as it follows Bast’s happy trail up his body.

The title is accurate, Bast is a Badd Motherf*cker, a crude brawling bartender who prefers the one-night stands.