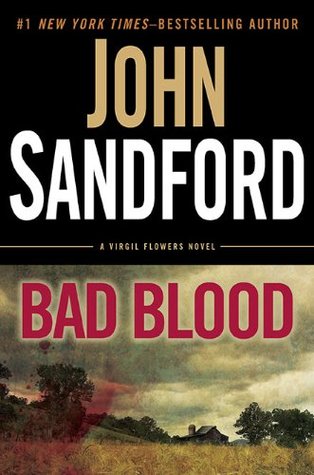 Fourth in the Virgil Flowers detective mystery series and revolving around that effin’ Flowers, lol. Bad Blood takes place in October in Minnesota.

In 2011, Bad Blood won the ITW Thriller Award for Best Hard Cover Novel. And I completely understand why. I’d give it a “7” if I could.

Holy cats! H-0-L-Y cats!! This one will have your jaw dropping below the floor! The drama and tension will keep your heart racing as well as your eyes and fingers as they turn pages as fast as possible. Sandford certainly trips you up as he slowly and quickly twists you around.

Yeah. That’s what I said. Slowly and quickly. Slowly you find out why Bobby killed that farmer. Quickly you begin to suspect the overall crimes within Bad Blood. It could take a strong stomach to get through this.

I finally figured out why everyone calls him that fuckin’ Flowers is because he’s too good at what he does. Virgil says it’s just “cop alliteration”. He does make a good point about that early suicide in the story. Never really thought about how a guy might, um, present himself in such a situation, but it does make sense. Then again, Lee Coakley sure appreciates him, lol. Virgil, that is.

Virgil does have an unexpected way of investigating murder. He likes to blab all about their leads, to see what might happen. And his background as a preacher’s son comes in right handy in this.

In some ways, I can understand why the Catholic Church was so upset when Johannes Gutenberg invented the printing press. Ya let anybody read the Bible, interpret it the way they want, and it can become a nightmare.

Perverts will use any excuse…

I can’t believe these religious idiots, how quickly they leap to blame others. I understand why, but it still astonishes me. I did have to laugh about the “minor pie fight” over why the World of Spirit kids scored at the top of academic achievements. Yep, you got it. Everyone decided the other kids in Minnesota would score just as well if teachers got paid more, lol.

One late fall Sunday in southern Minnesota, a farmer brings a load of soybeans to a local grain elevator — and a young man hits him on the head with a steel bar, drops him into the grain bin, waits until he’s sure he’s dead, and then calls the sheriff to report the “accident”.

Suspicious, the sheriff calls in Virgil Flowers, who quickly breaks the kid down…and the next day the boy’s found hanging in his cell. Remorse?

Virgil isn’t so sure, and as he investigates he begins to uncover a multigeneration, multifamily conspiracy — a series of crimes of such monstrosity that, though he’s seen an awful lot in his life, even he has difficulty in comprehending it…and in figuring out what to do next.

Agent Virgil Flowers, a preacher’s son, works as a detective-at-large (but doesn’t carry a gun) for the BCA. His true love, however, is writing articles on hunting and fishing. Mrs. Wilson is Virgil’s neighbor.

The Bureau of Criminal Apprehension (BCA) is…
…is a state police organization. Lucas Davenport is Virgil’s boss. Beatrice Sawyer, Don Baldwin, and Mary Lopez are the scene-of-crime investigators. The hippie-ish Sandy is an excellent researcher. Rose Marie Roux is the commissioner of public safety and Lucas’ boss. Shrake and Jenkins are BCA thugs.

“I’ve never been overgunned. I have been undergunned. After that happened, I reconceptualized.”

Homestead is its county seat with Dennis Brown as its chief of police and Lee’s former boss. The Yellow Dog Café where Virgil spends a lot of time is owned by Bill Jacoby. Earl and Dick Street are some of the customers at the diner. Pat Sullivan is a gay reporter. Clare Kreuger delivers the mail. Rich is a photo technician with a tip. Brian and Judy Craig are farmers with some interesting insight. Peter Van Mann is a widower farmer who got reamed; Jake is his dog. Son Wood owns Son Wood’s Surface Sealers and was a friend of Crocker’s. Roger works for him. Delores is Son’s chatty bookkeeper.

The nineteen-year-old football jock, Bob Tripp, works at the Battenberg Farmer’s Co-op. George and Irma Tripp are his parents. Maicy is a student. Jay Wenner was a friend of Bobby’s.

Sheriff’s Department
The divorced Lee Coakley is the new sheriff in town and has three kids. (Sue is one of the boys’ girlfriend.) Ike Patras is the medical examiner in Mankato. Deputies Gene Schickel and Gregg Dunn will back up Virgil and Lee. More deputies include John Kraus, Buddy, Marcia Wright, Rob, Don, Sherry, and Bob Hart. Stupek. Deputy Jimmy Crocker was on duty the night of the suicide; he was also a childhood friend of Flood’s. Harlan is the previous sheriff.

Bill Clinton and Andersson are highway patrolmen. Sheriff Beau Harrison in Martin County will need to lend jail space. Larry Cortt is a friend of Hart and his wife, Jenny. Darrell Martin is Lee’s private attorney. Judge John O’Hare is tight-lipped; Doris is his wife. Harris Toms is the county attorney.

The World of Spirit is…
…a religion brought from Germany back in the 1900s. Leonard and Louise Baker were Kelly‘s parents. John and Luanne Baker were her uncle and aunt. Jacob “Liberty” Flood is married to Alma. Edna and Helen are their precocious daughters. Emmet Einstadt is Alma’s father and the head of the World of Spirit. Leonard and Junior are his sons. Mary is Leonard’s wife. Wally Rooney will be moving into the Floods’ house. Kathleen Spooner is Crocker’s ex-wife.

Harvey Loewe has his own secrets and a desperate need to run. Joe and Marsha Loewe are his parents. Greta and Karl Rouse are really into it, and Karl loves photography. Kristy Rouse is the helpful daughter. The Bochers, Steinfelds, Beckers, Muellers, John McGuire, Ted Morgan, and Loren are fellow worshippers. Dick and Mary Bosche and Dick and Sandy Waldt had slid right in. Jacky Shoen.

Lucy “Birdy” McCain Olms is one who got away. Roland “Rollo” Olms was her jerk of a husband. Birdy’s family included her parents, Ed and Ruth; her brothers Robert and William; and, Louise McCain Gordon. Charlie Lane is a cop in Sleepy Eye. Gina Becker is an old friend of Louise’s.

Good Shepherd Lutheran Church
The Reverend John Baumhauer is an old friend of Virgil’s dad. Danny McCoy used to be the Catholic priest in Homestead.

Hayfield is…
…a town where Virgil worked a case some time back. Clay Holley wants to help out. Marie is Clay’s girlfriend. The Johnsons, Pells, and Schooners are all retired neighbors who can’t wait to help as well.

Tom Parker is a very good defense attorney. Laurie is his associate and connects the murders. Richard Reedy was a slick guy from Marshall, Virgil’s hometown.

The World of Law is the real world.

The cover reminds me of an Old Master oil painting with that gorgeous and atmospheric landscape with its lone barn set back behind the field and surrounded by hills and trees. The painting covers not quite half of the cover’s bottom while the author’s name — in a dull gold and white against a black background — is embossed and taking up the top half with a tiny bit of series information banding the middle.

Oh, yeah, the title is definitely about Bad Blood in this community.