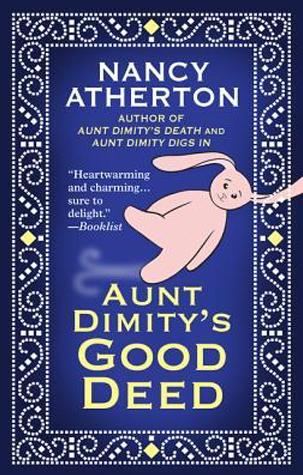 Third in the Aunt Dimity cozy mystery series and revolving around the ghostly, helpful Aunt Dimity and her heiress, Lori Shepherd Willis. It appears to have been two years since Aunt Dimity and the Duke, 2, and the setting for this story is all over England.

Aunt Dimity’s Good Deed was fun to read with plenty of scandal and horror that reached back to the early 1700s. It was also odd to read with a weird blend of coziness and me wondering which planet Atherton is on.

Oh, no, I don’t mean that she’s crazy, but that she had these characters engaging in questionable, impractical ways. William Sr is rather complaisant about being pushed out, and he’s the one with his daughter-in-law on her second honeymoon? I do like that he’s such a friendly bloke and willing to play chess with young Nell. Somehow, Derek is a building contractor AND an earl’s grandson? Emma is willing to let her twelve-year-old run off with Lori on her wild goose chase? Lady Eleanor? Only if her dad is the heir, and even then she’d be known as The Hon Eleanor Harris or Miss Harris. As for Sir Williston in the 1700s, how is that his YOUNGER brother is Lord William? I thought lords were a level above sirs??

As for the story, it’s all about perception and communication. And, hoo boy, are there ever some misconceptions running around in Aunt Dimity’s Good Deed! Not the least of which is Bill’s belief that his father should retire! As for Gerald’s “reputation”…well… And there are some interesting clues in Uncle Williston’s madness, ones that parallel the scandal in the eighteenth century.

Atherton uses a first person protagonist point-of-view — we’re only seeing events through Lori’s eyes, and I must say, her imagination works overtime. It was quite annoying, as she kept imagining how Bill “really” felt. It did fit in with that lack of communication that was running about. Communication, however, is not Nell’s problem. Oh, no, that young lady has got one heck of an imagination! She and Bertie are quite into disguises, er, I mean, costumes and creating fanciful backgrounds.

I confess, I don’t know why Lori is so frantic to find her father-in-law. He’s an adult. He left a note. OK, so it was an abbreviated note, but jeez.

I do, I do, I do adore the description of Anthea and Swann’s kitchen at the farm. It’s exactly what I would love.

Yep, it is a fun read, BUT it’s all sooo easy with extremely little tension, although it was high on the silly drama.

Between the overwhelming aunts insisting on babies and a workaholic husband, it’s left for Lori to take her father-in-law off to England for what was to have been her and Bill’s second honeymoon. Oh well…

Bored with less and less time on his hands, William Sr has his own plans, complicated by an ancient family scandal that may tie in with the current-day scandal involving the English family law firm of Willis & Willis.

It becomes a chase all over England, one that finds Lori and Nell accumulating clues everywhere!

The Boston branch of the Willis family was…
…established in the early eighteenth century. Today, Bill Willis is the lawyer in charge of Aunt Dimity’s will. A guy who fell head over heels in love with Lori. His family is part of a hoity-toity Boston family. Well, Father, William Willis, Sr, is a sweetheart with a love for armchair travel, and the head of Willis & Willis, one of the oldest and most prestigious law firms in New England. The hoity part comes with Bill’s aunts: Honoria and Charlotte. Nasty witches, they are.

Dr Stanford J. Finderman is the curator of the rare book collection at the library where Lori went to school. He’s also a friend and her former boss. The bickering Biddifords are Willis clients and have finally agreed to settle the late Quentin Biddiford’s will with Reeves Biddiford moving negotiations out of Boston. Randi is another Biddiford.

In Finch, there is…
…a lovely cottage that had belonged to Aunt Dimity Westwood; now, the cottage belongs to Lori. Aunt Dimity is the ghost who visits. Not a relative, but she had been Lori’s mother’s best friend. The Westwood Trust is a philanthropic organization formed by Aunt Dimity. Starling House was a home for widows and orphans founded by Dimity, and where Dimity took the newly orphaned Thomas. Bobby had been Dimity’s fiancé who was killed in World War II.

The garden-loving Emma Harris, a former computer engineer, is Lori’s friend in England who lives right next door to Lori’s new-from-Aunt-Dimity cottage with her husband, Derek, and her stepchildren, seventeen-year-old Peter and twelve-year-old Eleanor “Nell“, a.k.a., Nicolette Gascon. Derek is a successful building contractor specializing in restoration work; his grandfather is an earl. Ham is Nell’s black Labrador retriever. Bertie is Nell’s always-coordinated teddy bear.

Mr Barlow is a retired mechanic who takes care of Lori’s English cars. Mr and Mrs Peacock’s pub is the closest thing to a hotel. Their son, Martin, left for the army 20 years ago. Peggy Kitchen has a shop on the square.

The Flamborough Hotel is…
…in London with Miss Kingsley the concierge. (She has an Aunt Edwina.) The Boston Willises have used it as a home base on every visit to England. Paul is a chauffeur friend who works for the hotel. Bjorn is the barman.

The English side of the Willises
The siblings of William Sr’s age group all retired from the family firm, leaving Lucy (Anthea and Douglas’ daughter) and Arthur Willis the cousins in charge of the English family law firm at No 3, Ann Elizabeth Court. I think George is the butler with the firm. Lucy’s sisters have only recently left university.

Haslemere, Surrey, is…
…where the angelic-looking Gerald Willis, a Willis cousin and former solicitor, now lives at The Larches. Mrs. Burweed is his housekeeper. The Georgian Hotel is a comfy place. Miss Coombs is the sighing receptionist; the maids include Mandy, Karen, and Jane; Denice works in the hotel garden; Alvira helps in the kitchen; and, Mr. Digby is the porter.

Cloverly House in Kent is…
…the nuthouse where Williston, the middle child, resides living out his guilty fantasies triggered by his wife, Sibyl Farrand. Sir Kenmare Poulteney is its director, and a friend of young Nell’s grandfather. Mrs Chumley is his housekeeper. Cyril is a gnomish-looking jack-of-all-trades for the place.

Old Warden, Bedfordshire is…
…the Picturesque village where Thomas, Gerald’s father and the oldest, has retired with his stuffed giraffe, Geraldine, after his heart attack. Nurse Watling takes care of him. Thomas loves living there as the village is near the Shuttleworth Collection of antique and airworthy aeroplanes. (Back in the day, Lord Ongley tore down the village and erected a Picturesque one to improve his view.)

Cobb Farm in Yorkshire is…
…where the horse-mad Anthea retired with her current husband, Swann. Seems Swann has had some SAS training. Douglas was her first husband.

Dr Hawkings is an English gynecologist? Mrs Farnham is of the miraculous triplets. Nanny Cole is a popular English couturier and a friend of the Harrises. Lady Rutherford is using the English Willis firm for her legal requirements. Toby “Toby the Terrible” Treadwell, an expert on papers and inks at the British Museum, is a friend of Lori’s. Danuta Sieggersson is a handwriting expert. Dr Sarah “Sally the Slut” Flannery was a physician with an open hand with the pills. Chief Inspector Mappin is with Scotland Yard.

…the infamous Julia Louise Willis is the Willis spouse who made the family firm successful in London. Sir Williston Willis was the elder son. Lord William was Sir Williston’s younger twin, who was shipped off to the Colonies and later married a Charlotte Eugenie Stoll. Sybella Markham was a wealthy orphan accepted into the Willis family.

The cover has a white “mosaic” border of scrolls framing the cover with a background that is a deep royal blue that gets slightly lighter in the center. The author’s name at the top and info blurb are in white. A note about earlier books in the series is centered just below the author’s name and the title itself, centered at the bottom, are in yellow. Slightly above center is Reginald, Lori’s pink flannel rabbit.

I suspect the title is more about finding the real deed and with Aunt Dimity’s Good Deed including all those helpful clues. 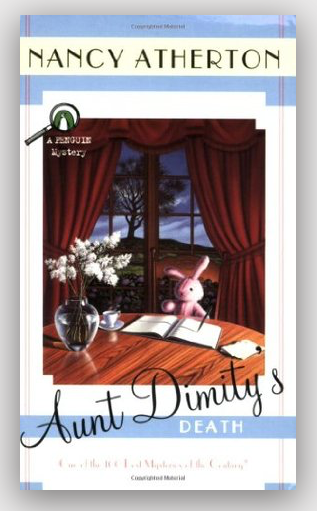