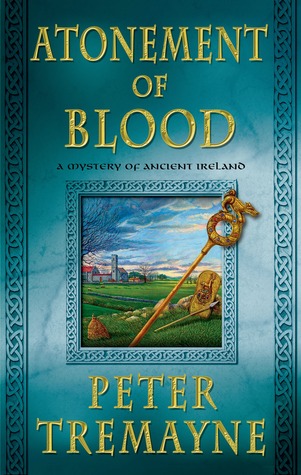 Winter, 670 AD. King Colgú has invited the leading nobles and chieftains of his kingdom to a feast day. The gathering is interrupted by a religieux claiming that he has an important message for the king. Suddenly, the man, shouting 'Remember Liamuin!', stabs King Colgú. The assassin is slain, but Colgú is on the verge of death. Who is Liamuin? Is it a female name? Who is behind the assassination attempt?

Colgú's lawyer sister, Fidelma of Cashel, and her husband, Brother Eadulf, are charged with solving the mystery. They must journey into the territory of their arch-enemies, the Uí Fidgente, uncover the evil secrets in the dark, brooding Abbey of Mungairit and venture into the threatening mountain fastness ruled by a godless tyrant. Danger and violence are their constant companions until the final devastating revelation...

Also by this author: The Seventh Trumpet, The Second Death

Twenty-fourth in the Sister Fidelma historical mystery series set in 670 AD Ireland and revolving around the former Sister Fidelma and her husband, Brother Eadulf.

Tremayne states that Atonement of Blood follows events in The Seventh Trumpet, 23, and begins November 24 (of our calendar).

My Take
Whew, there is no love lost between the Eóghanacht (Fidelma’s people) and the Uí Fidgente in yet another tale of twisty and seemingly vague clues that Fidelma slowly pulls together into one tight knot in spite of Tremayne’s many red herrings. Some of the distractions were the various people who were impersonating others or switching identities. And then, of course, the lies. Did Brother Ledbán know that the steward was also Codlata?

I’m surprised at how much faith Fidelma puts into her wand of office and the law, especially as she is continually waylaid by or wading into menacing parties as she holds strongly to her beliefs, no matter what!

Hold on a sec’… It’s been, maybe, an hour since Colgú has been stabbed, and they already know there’s no infection? Wow. I’m impressed. Medicine is so advanced in seventh century Ireland *eye roll*. On the plus side, events in this cause Fidelma to show her emotions as opposed to her usual cryptic exterior, although Tremayne was, sadly, too interested in the info dump in this story.

Poor Eadulf. As much as I prefer the Irish laws, there are some that tick me off for their insularity, and they don’t do much to reassure foreigners, so I hope Eadulf appreciated Finguine’s sharp comment. Oh, crack me up! I loved Finguine’s “mild” reaction to Brehon Aillín’s peevishness! In spite of the slurs cast on Finguine, ya gotta like the guy. It is a sad peek in at the foster system, and its effect on language. The concept of fosterage is a good one, but it is sad for the personal effect it has on the child’s real parents. One can only imagine the effect it has on the child.

It’s interesting (in a bad way) how uneducated people become so insular in their thinking. Muirgen certainly has an interesting interpretation of the Tower of Babel. I loved Eadulf’s explanation to her, and it was quite prophetic.

“…rules are only for the obedience of fools but the guidance of wise men.”

Between the situations Fidelma plunges them into and the dire consequences that hang over too many, events in this really make me wish Fidelma or Eadulf had access to a cellphone!

Cute story about Fintan, the Salmon of Knowledge. And interesting that the Northwest Indians also saw the salmon as an important symbol.

I’m with the Uí Fidgente people from whom Fidaig extracts tribute, but surely when the Uí Fidgente come to collect, they tell them about Fidaig? Or is there some demarcation that isn’t mentioned, that each side is aware of and so they don’t try to double up on their tributes?

It is fascinating to “watch” as Fidelma puts these clues together, especially when it seems such an impossibility. And Tremayne does a beautiful job of providing lots of side information on Irish culture of the time.

The Story
An unexpected attack during a feast sends Fidelma and Eadulf cantering off to learn the why behind this attempted assassination. It’s a trip that will uncover many wrongs with too many people painting the Eóghanacht with a tarred brush even as Fidelma plunges them over and over into potential death traps.

The Characters
The Eóghanacht
Fidelma (she chose to give up being a religeuse in The Chalice of Blood, 21) is still a dálaigh, her brother, the king’s, personal adviser, and has returned to being a Princess of the Eóghanacht. She’s still married to Brother Eadulf, an Angle from England, and they have a son, the undiplomatic Alchú. Fidelma’s horse is named Aonbharr.

Colgú is King of Muman, the largest and most southwesterly of the Five Kingdoms of Éireann. His capital is in Cashel. Finguine is Colgú and Fidelma’s cousin and Colgú’s heir apparent, his tánaiste. Áedo is the chief brehon of the kingdom; Aillín is his deputy.

Servants for the king, Fidelma…
Beccan is the steward of the palace, the rechtaire. Brother Conchobhar is physician and apothecary for the royal family with a side interest in astrology. He gives Eadulf religious authority of his own. Dar Luga serves as housekeeper of the palace, airnbertach. Muirgen is Alchú’s nurse; Nessán is her husband who works as a shepherd. Spelán is another shepherd worried about one of his flock.

The Nasc Niadh or Golden Collars, are the King’s guards
Caol is in command of the king’s bodyguards. Gormán is one of the king’s guards who has traveled before with Fidelma and Eadulf. Luan sent the religieux in to the feast. Enda, Dego, and Aidan are more of the elite warriors. Uisnech, Prince of the Eóganacht Áine was in command of the troops charged with keeping the peace in the land of the Uí Fidgente until Prince Donennach accepted Colgú as the rightful king. Only, Uisnech nursed too great a hatred for them.

Della is Gormá’s mother. Ordan of Rathordan is a smarmy merchant. Aona, a retired Nasc Niadh is now a tavern-keeper at the Well of Aorna; his son is Adag.

Socht forces Fidelma and her party to the fortress of Ath Dara (the Ford of the Oaks) at arrowpoint. Lord Conrí is war chieftain for the Uí Fidgente. Brother Adamrae is a Penitential who hasn’t enough legal training, isn’t very faithful, and is much too arrogant as he attempts to impose Penitential laws that are contrary to the laws of the country. Brother Cronan is the religieux who usually serves Dún Eochair Mháigh. Lachtine is their apothecary; he came from Menma’s area.

The abbey of Mungairit
Abbot Nannid is a sour-faced man and the uncle of Prince Donennach. He also has a small shrine of sharp and shiny weapons dedicated to the Uí Fidgente. Brother Lugna is the master of stables. Brother Cuineáin is the abbey steward seen as unfairly promoted by other brethren, supposedly for his previous experience in administration, a skill which exceeds his Faith, and there are conflicting stories about his background. He did show up at the abbey shortly after the Battle of Cnoc Áine. Brother Cú-Mara is on an errand from the abbey of Ard Fhearta where he is a steward. He knows Fidelma from Master of Souls, 16. Brother Ledbán is very old and used to work in Codlata‘s (nephew and steward to Prince Eoghanán) stables. He’s also the father of Liamuin and Lennán. Brother Lennán was the brother who practiced medicine and was killed at the Battle of Cnoc Áine, four years ago; he’s also the assassin. Maolán was a scribe here.

Liamuin was a beautiful woman loved by most men who saw her. Aibell is her daughter and a young runaway whose abusive father, Escmug, a fisherman, sold her into bondage. Marban, the millwright, was Escmug’s brother. Caol was the Cashel warrior stationed at Menma’s. Menma was a bó-aire with high morals. Suanach was the only survivor of the massacre at Menma’s rath. Flannait and Cadan, a couple who farmed nearby, came to Suanach’s rescue.

Failinis is the farmer’s, Temnén’s, hound. Temnén had been a bó-aire, a young noble, who fought at Cnoc Áine. Órla was the wife who was murdered.

Sitae is the innkeeper at the Ford of the Oaks.

The land of the Luachra
Fidaig is lord of the Luachra who remained neutral in the war. Artgal is Fidaig’s son and tánaiste. Gláed is his youngest and the least dutiful. Loeg is one of his warriors with an issue against Artgal.

Colmá mac Lénine is a poet and a churchman whose services to the faith and his poetry are celebrated as a holy day. He established an abbey at Cluain Uamha. He also discovered where Ailbe, a priest who brought the Faith to Éireann, was buried.

A brehon is a judge while a dálaigh is a lawyer. A rath can be a variety of things: chattel, goods, property used as collateral, a person’s fortress, the wall surrounding a chieftain’s residence. A bó-aire is a cow lord.

The Cover
The cover is a beautiful teal blue with Celtic knots forming borders on the left and right as well as framing a square inset picture of important symbols within Atonement of Blood. The title and author’s name are brightly subtle in a hammered gold gothic font.

The title refers to a number of characters who seek or must provide an Atonement of Blood for their sins. 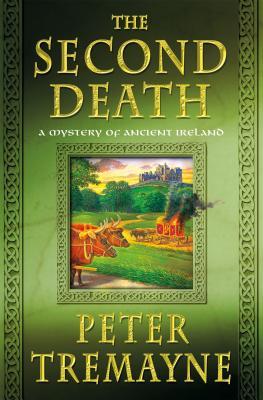 3 responses to “Book Review: Atonement of Blood by Peter Tremayne”