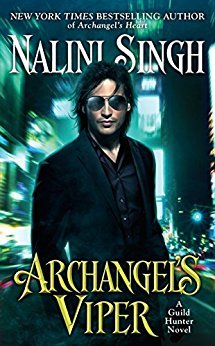 Tenth in the Guild Hunter urban fantasy series based in an alternate history New York City and revolving around a world in which archangels rule the world and guild hunters pursue rogue vampires. The couple focus is on Holly “Sorrow” Chang and Venom.

I was disappointed with this installment. Oh, it was nice to get more of Venom’s background (and what he endured to become a vampire!) and find out more about Holly’s new “powers”, but, well, it was a good thing that Singh kept telling me how Holly and Venom were feeling. *eye roll* It would have been even better if Singh had made it more believable and made me feel their emotions. Using third-person point-of-view shouldn’t have made this impossible, especially with the narrator getting into Holly’s and Venom’s heads. Ah well, can’t have it wonderful every time.

What I did appreciate was that sentiment at the start where Janvier provides that goad for Holly to go home to her family. So true. Another good bit was Venom exhorting Holly to use her impulses. Both of which play into the theme for Archangel’s Viper, that of acceptance.

What’s with “kitty” as a nickname? Yeah, Holly is tiny with tiny fangs, but it just doesn’t fit. IMO.

We finally find out about Michaela’s pregnancy!! Eeek! It’s that scene in the turret that Michaela makes an honest appraisal of herself. Whew.

There is soo much happening here, and that might be part of Singh’s problem. No time/space to devote to developing the actions.

It’s lucky for Holly that Venom is returning after a two-year absence. With the escalation in her powers, that nagging inner voice, the bounty placed on her, and finding Daisy, Holly will need all the help she can get to navigate her way through this maze of terrors.

The colorful Chinese-American Holly “Sorrow” Chang, a.k.a., Hollyberry or kitty — part vampire, part human, and part angel — is under a death sentence after events in Angels’ Blood, 1. Able to mesmerize her prey, inject venom, break bones with a look, and use glamour, she’s under a never-ending Contract to Dmitri. Dr. Mia Chang is her elder sister and best friend moving to Boston to a new job at Massachusetts General. Daphne and Allan Chang are her loving parents. (She runs a deli, and he has a dress shop.) Alvin and Wesley are Holly’s musical brothers.

The 350-year-old Venom is one of the Seven. A.k.a., Viper Face or Poison, his original name is Tushar. Now he’s back from a two-year absence. Venom had had six brothers, including Mohan, and three sisters. Aneera had been his betrothed when he was human. Mania was an innocent child in Venom’s village.

The Seven are…
…an elite private guard, those angels and vampires loyal to Raphael, the archangel who rules New York. Dmitri, a vampire, is Raphael’s second-in-command, his “Blade”, and a lifelong friend. Dmitri is married to Honor, another vampire (Archangel’s Blade, 4). Jason is the spymaster. Illium, a.k.a., Bluebell, is sulking over Aodhan, his best friend, a.k.a., Sparkle. Naasir is mated to Andi (Archangel’s Enigma, 8).

Elena is the guild hunter-turned-archangel and Raphael’s consort. Monsieur LaFerge is the “renowned vampire nose” Elena hired. She has her own Guard these days, and it includes Janvier, Ashwini and Izak, who is the youngest Tower angel.

The poetry-loving Trace is keeping Andreja company at the airport. Vivek Kapur is a new-made vampire and a formerly paralyzed guild hunter who is a wizard with computers. Nisia and Lucius are some of the angel healers. Keir is the senior-most angelic healer.

The Legion is…
…a repository of earth power that woke during the battle in Archangel’s Legion, 6. Powerful, with wings like bats, Raphael turned a skyscraper into a gigantic greenhouse as their home base. They are beginning to individualize.

Guild Hunters are…
…like bounty hunters. They’re sent after vampires who have run out on their Contract. Demarco is one of them and likes to go climbing.

The Cadre are…
…the archangels who rule the world. Raphael is one. Neha is the Queen of Snakes and Poisons who turned Venom. Charisemnon gained the ability to create disease (Archangel’s Legion). Zhou Lijuan rules China but has been AWOL since Archangel’s Legion. Caliane is Raphael’s mother and rules Amanat (Archangel’s Consort, 3). Elijah had been a general under Caliane. Michaela, the former Queen of Constantinople and current Archangel of Budapest, is beyond gorgeous but vicious.

It’s been four years since Archangel Uram (Angels’ Blood) went insane. The friends Holly lost include Shelley, Cara, Maxie, Rania, and Ping. Kimiya, Nataja, and Daisy Scaldini were other victims. Zeph and Arabella are down-on-their-luck vampires and friends with Holly. Brynn is the human Zeph and Arabella protect. Magnus owns a bar and is another friend. Big Irma is a human mother figure for certain vampires.

Mike is the leader of the inept gang. Walter Battersby is a vampire fixer, a broker who acquires what wealthy immortals want. Marlin Tucker is a low-level scumbag and one of Ash’s contacts. The 4,000-year-old Kenasha is an incompetent angel. David Shen had been Holly’s boyfriend after she was found.

Cascade is a type of supercharging event that increases an archangel’s abilities or powers and can cause catastrophes throughout the world. Umber (Archangel’s Shadow) is a designer drug that creates a vicious blood hunger.

The cover is a range of emerald greens of an out-of-focus busy, nightlit New York City street. Venom in his trademark sunglasses and all-black ensemble looks quite the gorgeous metrosexual, a lock of hair blown across his forehead, and hands in pockets. An information blurb is at the very top in white with the author’s name immediately below it in a gothic font. At the bottom is the title in the same font but yellow with the series information tucked under the “el’s” in white.

The title is that member of the Seven on whom the story focuses, Archangel’s Viper.