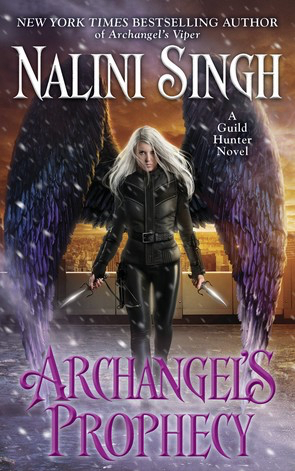 Eleventh in the Guild Hunter paranormal romance series set in an alternate earth and revolving around a hunter turned angel. The focus is on prophecy…and Elena. It’s been two-and-a-half years since Morocco.

While it’s a casual start, it soon turns terrifying with that voice in Elena’s head. The you must die that crops up in different variations. A little bit history, a whole lotta scary.

I love the sound of the Legion’s building, being turned into a garden. Their current evolution is also fascinating, as they are, barely, beginning to be unique. And I am so grateful that they’re so loyal, if enigmatic.

The majority of the drama and tension surrounds Elena and her disintegration as well as the voice she hears predicting the end. All using third-person point-of-view. Minor dramas include Elena’s worries about angelic etiquette. It’s a fun sort of drama, and I can’t help but laugh a bit at her terror even as I worry that she won’t be around!

It’s an interesting point in which Andreas wonders why no one values patience in this age, to which Elena reminds him that human lives are shorter and must be lived in fast-forward.

Elena’s deterioration is nothing though compared to Raphael’s fears…and I’m crying again.

An eons-old prophecy is coming true…and the first mortal to be turned into an immortal in angelic memory is regressing. Becoming more and more human. Easier to hurt. Easier to kill.

The armies of China are on the move, a mysterious sinkhole of lava appears in upper New York, and climactic weather is lashing the world.

This time, survival may not be possible…not even for the consort of an archangel.

Elieanora “Elena” Deveraux, a.k.a., Ellie, was born a Hunter and became an angel, consort to Raphael, the Archangel of New York. Montgomery is their majordomo in their home in the Enclave; he’s married to Sivya, the chef. Both are vampires.

Elena’s sisters, Belle and Ari, were murdered by Slater Patalis. Marguerite had been their mother who suicided. Jeffrey Deveraux is the father who went cold; he’s now married to Gwendolyn. Beth is a surviving younger sister who is married to the selfish Harrison. Marguerite “Maggie” Aribelle Devereaux-Ling is their daughter. Eve is a half sister and another Hunter born. Jean-Baptiste and Madja Etienne are Elena and Beth’s maternal grandparents, both vampires, and they have been in New York for the past two-and-a-half years with Jean-Baptiste now a commander in charge of an infantry unit (Archangel’s Heart, 9).

The Tower is…
…headquarters for Raphael and his Seven that includes Dmitri, Rapahel’s second-in-command, who is married to Honor, the reincarnation of his first wife (Archangel’s Blade, 4). Naasir, a chimera, is mated to Andromeda, an angel (Archangel’s Enigma, 8). Jason is his spymaster mated to Princess Mahiya (Archangel’s Storm, 5). Illium, a.k.a., Bluebell, the most human, has been affected by the Cascade. The Hummingbird, an Ancient, is Illium’s mother.

Aodhan is Illium’s closest friend, and it has been one year since he returned to New York. Trace and Nimra. Venom is partnered with Holly; both are vampires (Archangel’s Viper, 10). Laric is a scarred and emotionally wounded healer who arrived eight months ago. Izak, a.k.a., Izzy, is an angel who is recovering from the battle and will be part of Elena’s Guard. Jurgen is one of the angel guards on the lava sinkhole. Nisia is an angelic healer. Nga is a senior member of the team, born four hundred years ago in Vietnam. Vivek Kapur, who has been a vampire for five years, is another born Hunter. He had once controlled the Guild’s Cellars and now works with Jason.

Andreas is the angel who Made Harrison, a.k.a., Harry. Nara is Andreas’ keeper of records. Iris works in his kitchen. Phineas, Tepe, and Vernon are vampire groundskeepers. Jade had been embezzling.

Imani is an 8,000-some-year-old angel who has lost a vampire, one Damian Hale. Taizaki is a vampire and Imani’s majordomo. Nazarach is an angel who had “lost” a crazed vampire, Richard. Hiraz Weir is a senior Tower vampire who loves China.

The Legion rose…
…in Archangel’s Legion, 6, as a repository of power. The Primary is their leader, and yet they are all the same, although they are all becoming. They call Elena acelari.

The Guild Hunters are…
…a law enforcement organization charged with retrieving runaway vampires. Sara is the director, and she’s married to Deacon, who makes beautiful weapons. Their daughter, Zoe, is seven-and-half and has graduated to actual tools in miniature…to better help her daddy. Other Hunters include Ransom, a sniper who is married to a librarian; Demarco is dating Nyree; and, Ashwini “Ashblade” (was Made in Archangel’s Shadow, 7, and has the gift of foresight) is married to Janvier, a Cajun vampire and one of Raphael’s.

Jameisha is a now-retired Guild medic. Quinton Archer had been the Guild’s Slayer, the hunter who tracked down and executed rogue Hunters, but died seven months ago. His wife, Sabrina, had died a year before their daughter did. His daughter, Samaria Candace Archer, had gone into rehab. Bill James.

The Refuge is…
…home base for all the angels and where their children are raised. Jessamy is an angelic historian, mated to Galen, Rapahel’s weapons-master. Keir is a gifted healer with an office, the Medica, deep in the Refuge. Imalia had been Aodhan’s pregnant sister. Sam is a young angel and one of Elena’s favorite people.

The Cadre of…
…Ten are the ruling ten archangels…the world cannot handle more. Witness Caliane and Nadiel, Raphael’s parents. Alexander, an Ancient, re-awoke and has re-taken his territory — Persia. Favashi has taken over China, formerly Lijuan’s domain. But Lijuan is still alive, in hiding, seen as a goddess by her people. Too powerful to let live. Elijah is the Archangel of South America, a former general under Caliane, and one of Raphael’s closest allies who has gained an ability over cats. He’s mated to Hannah, another angel. Charisemnon is the Archangel of Disease who holds Northern Africa. Titus is the Archangel of Southern Africa who loves the ladies and is another of Raphael’s allies. Neha is the Archangel of India. Michaela, the Archangel of Budapest, is a manipulative archangel. Cassandra has been gone for so long, she’s considered myth, although she’s said to have been kin to the Ancestors.

Simon Blakely had been a Don Juan of a vampire (Miuxu had been the angel who Made him), Eric Acosta was Simon’s roommate, Terence Lee and Nishant Kumar, and Jadchenko “Jade” Simnek who now has a gaming site.

Al and Anita are Beth and Harrison’s neighbors. Claire. Red Cutie and Monique Darling are vampire street hookers. China’s stepbrother turned her out to hook when she was 14; her real name is Jenessa “Jeni”. Lucy had been her roommate at one time and liked the drugs. Senataye signed up on Fang Love. Piero runs a food cart; he takes care of his orphaned eleven-year-old sister. Detective Hector Santiago has worked with Elena in the past.

The cover is a complexity of browns, purples, black, and white. A brown-to-pale-yellow sky and cityscape forms the far background with a pale purple rooftop on which a black-leather clad Elena, her long white hair flowing over her shoulders, her black and purple wings spread open, as she carries her knives, stalking toward us. White snowflakes or feathers fall around her and provide a white backdrop for the embossed pale violet title at the bottom. The rest of the text is in white with an info blurb at the very top, followed by the embossed author’s name with the series information centered in the upper half of Elena’s right wing.

The title, Archangel’s Prophecy, was pronounced by Cassandra, an angel from so long ago, she’s myth.