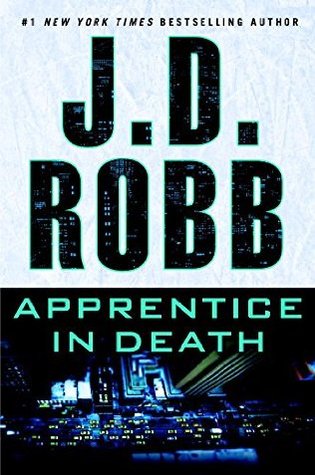 Forty-third in the In Death romantic suspense series set in a futuristic New York City, January 2061, to be precise, and revolving around Lieutenant Eve Dallas, a homicide cop who frequently partners up with her hunky billionaire husband, Roarke.

You can read the individual stories without starting from the beginning, but I don’t recommend it. Eve’s personal growth, her relationship with Roarke and with other characters, and her reputation with the general citizenry is much richer for the reader if they’ve read the series from the start.

As usual, I had no idea how Eve would figure out whodunnit, something that turned out to be quite easy. To identify the bad guys anyway. Catching them? That was another matter.

Eve grew in this one…voluntarily choosing to go back to the birthday party!! Paying attention to clothing choices?! Roarke is rubbing off on her, lol. Another OMIGOD!! is the change…probably momentary *grin*…in Dallas’ and Summerset’s relationship! Who knew there could be so much mellowing in one story?

LOL, you can guess how excited Dallas is to find out cops refer to her place as the Dallas Palace…*snicker*…

One of the things I adore about Dallas is her focus on the victims. On getting justice for them.

It’s definitely a plus that Roarke is gorgeous and incredibly rich. It’s much better that he’s so sensitive to his wife’s needs — emotionally and career-wise — and fantastic in bed. Hubba-hubba, *grin* And no, “sensitive” does not mean he’s a pushover, as Roarke is quite good at pushing back, especially when he’s being nurturing, lol. That quickie program Roarke created certainly is making an impression. I could hate him for being so technologically competent, ahem *grin* Oh, boy…the ice cream parlor in Eve’s name…

I do enjoy Robb’s initial description of Roarke each time. Even better, I love that she isn’t doing a cut-and-paste…ahem…unlike some writers.

As for this story…it will make you sick. The destruction of so many lives with so little reason. And when you consider who the mentor is…jesus… Then Robb throws in that twist. Jesus, Mary, and Joseph. You know in the abstract that people use and manipulate the people around them. That they have no conscience or moral code, but when confronted by someone like this, with the destruction that is wrought in people’s lives, their families, their friends… Yep, I’m for the death penalty.

I’m with Roarke. Eve would never have been that girl. She simply isn’t wired that way. Robb does make me a bit nuts with how fearful she [the author] makes Eve, although to be fair, Eve certainly does have reason for her feelings. It’s hard to overcome such horrendous childhood conditioning.

Ack!!! I know who Robb is voting for in this election, what with Hillary Clinton High School being mentioned.

One last confession…I have the feeling that Robb is winding down with Eve Dallas… I sure hope it’s simply my paranoia!

The shots came quickly, silently, and with deadly accuracy. Within seconds, three people were dead at Central Park’s ice skating rink. The victims: a talented young skater, a doctor, and a teacher. As random as random can be.

Eve Dallas has seen a lot of killers during her time with the NYPSD, but never one like this. Those security videos indicate the killer in this case comes from a very limited group to have those particular skills. It should make finding him easy.

The trail leads to a shocking revelation: there are two — one older, one younger. Someone is being trained by an expert in the science of killing, and they have an agenda.

Lieutenant Eve Dallas heads up the Homicide Division at Central and has a reputation for getting her man. The one she picked up more than two years ago is definitely a keeper, lol, for her husband, Roarke, is amazing. Galahad is their pudge of a cat with two different eye colors. Summerset is Roarke’s father figure and the major domo for the house, er, the Dallas Palace. Ivanna Liski, a former ballerina and spy, is dating Summerset. Mavis has been Dallas’ best friend for years and is now a singing sensation married to a popular fashion designer, Leonardo. Bella, their baby, is turning one years old. Nadine Furst is an on-air news host with her own show and is a friend of Eve and Roarke’s. Jake Kincaide is a rock star with Avenue A who is dating Nadine.

Homicide, Central
Delia Peabody is Dallas’ partner. Other detectives working under Eve include Jenkinson of the lurid ties, Carmichael, Santiago, Baxter and Troy Trueheart, and Reineke. Officer Shelby is the new meat transferred in; Uniform Carmichael distinguishes this Carmichael from the detective one.

Electronic Detective Division (EDD) is…
…headed up by Eve’s mentor, Captain Ryan Feeney. Detective Ian McNab is one of his best and is living with Peabody.

Lieutenant Mitchell Lowenbaum is the SWAT commander; Vince Patroni is one of his SWAT officers. Dr. Mira is the chief profiler; she and her husband, Dennis, are friends with Eve and Roarke. Captain Whitney is Dallas’ immediate supervisor; Tibble is the chief of police. Officers Fericke is a 30-year vet; Kevin Russo is just out of the academy; Sheridon Jacobs is Russo’s beat partner; Minx needs a lot more seasoning; and, Task and Newman are dispatched to pick up Jacoby’s son.

Dickie “Dickhead” Berenski is the chief lab tech; Morris is the chief medical examiner and friends with Dallas and Roarke; Morris is spending time (but not dating) Dr. Garnet DeWinter, the forensic anthropologist; Detective Vince Yancy is the police sketch artist; Kyung is the police media liaison; Marian Jacoby is an evidence tech with a son; and, Mary Kate Franco is a nurse practitioner at the infirmary. Kent Pratt is a court-appointed public defender. Jessica Gromer is a Child Services (CS) representative.

Wollman Rink is popular with ice skaters, including Ellissa Wyman, a part-time student/barista who practices daily; Dr. Brent Michaelson, an obstetrician, who loves to skate; Jenny and Alan Markum, teachers, are recreating their first date; Liam O’Dell is Jenny’s father; Kate Hollis is Jenny’s mother; and, Sherry and Charlie are their friends. Dr. Jack Lansing and Matt Brolin, who had been a corpsman in the army and became a veterinarian, leapt in to help. Wayne Granger knows his rights. Carly Deen and Paul Spicher are rink security.

Marta Beck is the office manager. Faith O’Riley is the midwife. Dr. Andy Spicker is a longtime family friend who is coming into the practice. Holly is the receptionist.

Donnie Shaddery, a dancer, has a yoga studio; Sensa is a partner of some sort. Henry Whipple is a detail-oriented desk clerk at the hotel and checked in Philip Carson and his son. Tasha works in Housekeeping. Grabby Larry is a street thief who needs to retire. Nathaniel Jarvist just turned seventeen. Fern Addison had been shopping. David Chang.

Reginald Mackie recently retired after 20 years on the job. Willow is his daughter. His second wife, Susann Prinz, was killed in a traffic accident. Gabriel was the name they had picked out for their son. Zoe Younger is Reginald’s ex-wife, now married to Lincoln Stuben, and they have a son, Zach, age seven. Lynda Track is Lincoln’s sister.

Rene Hutchins is the school psychologist while Thomas Greenburg is the principal at Hillary Clinton High School. Brian Fine drove the car. Charlie is the doorman at Nadine’s new place. Ms. Mannery and her dog, Mimi, are Nadine’s neighbors. Alyce Ellison is an assistant manager at Boomer’s where Susann had worked; Darla is one of their top salespeople. John Black and his son, William, are moving to Alaska. Gabe (turns out to be Dwayne Mathias) and Colt Willowby. Grace Woodward is a psychologist and a friend of Zoe’s. Jan Maguire and Philippe Constant will have a night to remember, forever. Lucy is their dog. Jonah Rothstein is one of the good lawyers; Aaron Taylor has been friends with Jonah for years.

Deputy Banner is a cop from Arkansas whose family brew has arrived. An Didean is the youth shelter Roarke is building. Father Chale is a Roman Catholic priest helping Morris get past Amaryllis‘ death. Laurel Esty had been a key witness who is now dating Yancy. Divine is an ice cream parlor.

The cover is cold with its pale, icy blue background against which the author’s name is writ LARGE. I do like the lit-up office buildings as the fill inside the letters. Très cool. Consistent with previous stories, the bottom third of the cover is a graphic that represents the story, a steep angled view of the street far below, the royal blues of a night-lit road of city traffic, a sniper’s view that reinforces the distance that shot traveled.

The title is the whole point in this story, for one of them is an Apprentice in Death.

4 responses to “Book Review: Apprentice in Death by J.D. Robb”