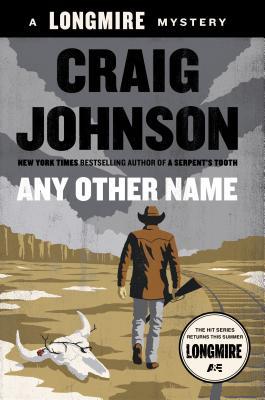 Any Other Name by Craig Johnson
Series: Walt Longmire #10
Genres: Mystery
Published by Adult, Viking on May 13, 2014
Pages: 319
Format: Hardcover
Source: the library

In Any Other Name, Walt is sinking into high-plains winter discontent when his former boss, Lucian Conally, asks him to take on a mercy case in an adjacent county. Detective Gerald Holman is dead and Lucian wants to know what drove his old friend to take his own life. With the clock ticking on the birth of his first grandchild, Walt learns that the by-the-book detective might have suppressed evidence concerning three missing women. Digging deeper, Walt uncovers an incriminating secret so dark that it threatens to claim other lives even before the sheriff can serve justice—Wyoming style.

Also by this author: Spirit of Steamboat, A Serpent's Tooth, The Highwayman, "Eleven/Twenty-Nine", An Obvious Fact, The Western Star, Depth of Winter, Land of Wolves, The Cold Dish, Death Without Company , Kindness Goes Unpunished , Another Man's Moccasins, "Land of the Blind", The Percentages"

Tenth in the Walt Longmire mystery series set in Wyoming and revolving around Walt, a sheriff with a laconic attitude.

My Take
I can’t help it. I love Walt’s laidback style, his adherence to what’s right, and his tenacity all rolled into one easygoing but observant man. Everyone is important to him, no matter their job or status. A fact Cady doesn’t always appreciate. Although, Walt always chasing off into the stupidest situations to chase bad guys really ticks me off. No equipment, no back up, no clothes, no communications. I suspect, ahem, that any cop pulling Walt’s stunts would be reprimanded big time.

There’s also an unevenness in this with all the bouncing around that goes on. I can’t put my finger on it, as it’s just a feeling, but it seems as if Johnson is throwing problems in willy-nilly.

What is it with some guys who can’t take no for an answer? Although, it does provide Walt the opportunity to show his stuff. And what a straight line it gave the sheriff, lol.

Oh yeah, get Vic involved and all dicks, I mean bets, are off. She just can’t help poking fun and needling Walt.

Okay, some niggles, why Roberta? What was the angle there? How does the Cheyenne Nation know to show up in Deadwood?

God forbid we not have fights and shootouts, then there’s that parkour chase over rooftops — amongst other chases! Then Johnson adds that buffalo stampede for flavor, lol, the coal train rescue…it just keeps going on. Nice bit of history on the Colt Walker.

I know you’re probably wondering just how Walt gets away with runnin’ loose in another sheriff’s territory. Well, he’s just got that rep that so many respect. That and they’re worried about their own coffeemakers…eek…lol…

“Ya gotta ride the trail until it ends”.

The Story
It’s a favor for Lucian who, in turn, is doing an old, old friend a favor — he owes her. Somehow, her husband shot himself. Twice. It’s a favor that will rebound badly even as it clears the air.

Meanwhile, Cady’s pregnancy is in trouble…

The Characters
Sheriff Walt Longmire is in charge of Absaroka County and is better than a bookmobile. Dog is the St. Bernard/German shepherd/dire wolf who’s adopted Walt. Cady is his pregnant lawyer daughter getting ready to give birth in Philadelphia; Michael is her husband and a cop there. Henry Standing Bear, a.k.a., the Cheyenne Nation, is Walt’s best friend. Lucian Connally is the one-legged, retired sheriff and Walt’s old boss and mentor. Victoria Rosetti is still recovering from her slice-and-dice in A Serpent’s Tooth, 9. Virgil White Buffalo is still rescuing from the sidelines.

Mrs. Phyllis Holman is in a wheelchair — a reason why drinking and driving is discouraged — and does closed-captioning for sporting events. Connie “Izzy” is their daughter. She’s had issues and is now on the school board. A straight arrow who upheld the law, Gerald Colman was in charge of the Campbell County Cold Case Task Force.

Campbell County Sheriff’s Department
Sandy Sandburg is the sheriff. Inspector Richard Harvey is Gerry’s replacement. Officer Corbin Dougherty is with the Gillette PD and used to date Cady. He feels he screwed up and is anxious to make up for it.

Roberta Payne was a a waitress who disappeared; Jane Towson is a co-worker. Sandi Payne is Roberta’s mother and since it’s been a whole three months her daughter’s been missing, wants her declared dead. Bret Russell is depressed and missing his ex-wife, Robby. Jim Russell is his father and runs a gun range and shop with a side of working leather — nice work too.

Linda Schaeffer, a woman with some amazing hobbies, also disappeared, and her husband, Mike (he’s a biker and ex-Marine), and little boy want her back. Tracy Jacobs is the chief cook and bottlewasher for Jack’s Tavern.

In Arrosa…
Dave Rowan is the postmaster. Neil Pilano is the bartender at Sixteen Tons. Greg Fry is a high-line driver for the Black Diamond Coal Mine. Bruce is the switchman no one can reach.

The Itty Bitty Titty Club in Arrosa
Lorea Urrecha is a Basque from Idaho looking for her missing sister, Jone Urrecha, a.k.a., the Basque Rose, a dancer at the Itty Bitty Titty Club. Curtis, a.k.a., Thor, is the bouncer. Kay works there too. Tommi Sandburg owns the club and bar, Dirty Shirley’s; she’s Sandy’s sister. Who loves it that Walt is hassling her.

Deadwood
Willie is a dealer with a lucrative sideline or two. Patrolman Tavis Bradley of the Deadwood PD is reluctant to set off in pursuit. Grace Coolidge was Calvin Coolidge’s wife; they had a summer White House at what is now the State Game Lodge outside Deadwood. Rebecca is her handy raccoon.

Special Agent Bruce Pivic of the Division of Criminal Investigation wants to talk to Walt.

Deke “Big Daddy” Delgatos is a killer playing games; he’s also a member of the Aryan White Supremacy Founding Brotherhood, a.k.a., the Assholes With Shit For Brains. Emil Fredriksen. The Asociación Punto Muerto is the Dead Center Association, an unofficial union of assassins — if a hitter is taken out, they simply send another.

Brittney and David ran the Sand Bar in Belize and made sure Vic got home most nights. Tomás Bidarte, the cowboy poet lariat from A Serpent’s Tooth is the bad man who cut up Vic, and he ain’t dead.

The Cover
The cover is a woodcut effect with Walt in his hat and sheepskin jacket walking in desolate country along curving railroad tracks, a steer skull behind him, snow, and mountains and a cliff face to either side with a funnel effect of varying gray clouds leading us and Walt inward.

The title is more of a verb in that Walt and Lucian Suspect quite a bit.