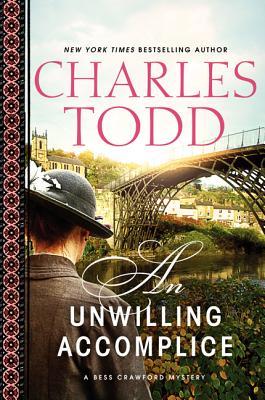 Goodreads
Also in this series: Question of Honor

Home on leave, Bess Crawford is asked to accompany a wounded soldier confined to a wheelchair to Buckingham Palace, where he’s to be decorated by the King. The next morning when Bess goes to collect Wilkins, he has vanished. Both the Army and the nursing service hold Bess negligent for losing the war hero, and there will be an inquiry.

Then comes disturbing word from the Shropshire police, complicating the already difficult situation: Wilkins has been spotted, and he’s killed a man. If Bess is to save her own reputation, she must find Wilkins and uncover the truth. But the elusive soldier has disappeared again and even the Shropshire police have lost him. Suddenly, the moral implications of what has happened—that a patient in her charge has committed murder—become more important to Bess than her own future. She’s going to solve this mysterious puzzle, but righting an injustice and saving her honor may just cost Bess her life.

Also by this author: Question of Honor, Hunting Shadows, A Pattern of Lies, A Fine Summer's Day, No Shred of Evidence, The Shattered Tree, Racing the Devil, A Casualty of War, The Gate Keeper, A Forgotten Place, The Black Ascot, A Divided Loyalty

Sixth in the Bess Crawford historical mystery series and revolving around a World War I nurse who works on the front line. This story takes place in the autumn of 1918.

My Take
Hmmm, the autumn of 1918, the year in which the Armistice is signed on the eleventh November. What will Bess be up to in her next adventure?

I’m looking forward to finding out, meanwhile, Bess is in deep trouble with charges of dereliction of duty following her, threatening her reputation and life with the nursing corps. Her punishment seems rather lenient in this: two weeks leave. It’s a conundrum, for Bess doesn’t deserve punishment, but the time off does come in handy.

The timeline was a bit confusing: do mind that the murder happens after Wilkins’ desertion.

It feels as if Todd didn’t have the time to polish this as it felt as if there were loose threads flopping all over. Yes, they mostly get tidied up in the end, but it was messy along the way. How could Bess have not been able to identify the sergeant? Todd tossed in all these wounded men as red herrings for finding the sergeant. All those attacks on Bess that made no sense. Phyllis Percy’s mysterious behavior was too odd. The major’s weird behavior from his desperate moves to escape and then not taking it when the chance offers. His bouts of madness. Barbara’s reasons for taking him on. Maddie’s secretive behavior. The two-man deduction. Then there’s the whole Wilkinses confusion.

It’s topped off with the stupid trope, the one of the heroine who can’t stay put.

Jesus, the stupidity of Lessup.

Still I enjoyed the basics of the story, and I do enjoy this series and how well Todd captures the flavor of the time period, its manners, mores, and dress. It’s also a look under the cap at how the nursing sisters perceive the army boards and what they’re doing to the men. And I think Bess might be discovering she likes Simon!

The Story
It’s Bess’ kind heart that gets played, and she’s left in the lurch with her superiors, Scotland Yard, and the military powers-that-be. Her reputation and that of Queen Alexandra’s Imperial Military Nursing Service are brought into question, and Bess is determined to learn the truth and clear her name.

It’s an ugly, convoluted path Bess follows as she discovers how many people Wilkins deceived, and she discovers a number of other deceptions along the way.

The Characters
Bess Crawford is a nursing sister with a predilection for solving mysteries. Sergeant-Major Simon Brandon started as a rebellious boy whom the Colonel, Bess’ father, took under his wing. Now he’s involved with the Colonel on hush-hush missions and lives in a cottage at the bottom of the Crawfords’ garden. And he’s usually around to help Bess out. Those missions must be pretty important, since the king asks Bess to give his best to her father.

Mrs. Hennessey is Bess’ landlady in London. Mary and Diana are fellow nurses and flatmates. Constable Williams is the beat cop in the neighborhood.

Inspector Stephens is with Scotland Yard.

Sergeant Jason Wilkins was badly wounded and is expected at Buckingham Palace. Thompson is the orderly who brings Wilkins to London. Grimsley is the orderly who expects to bring him back to the hospital in Shrewsbury. His brother, Jeremy, was reported killed on the Hoo Peninsula. Paul Addison survived. Corporal Benton also knew Addison.

Lovering Hall, the hospital in Shrewsbury
Sister Murray is a friend of Diana’s. Sister Hammond is young and in charge of the sergeant’s care.

Ironbridge
Inspector Jester is the hostile local law enforcement in Ironbridge where the famous Iron Bridge still stands. I remember seeing it on one of my trips to England. Stebbins was missing his bay horse. Sergeant Henry Lessup was on indefinite leave after shutting down his post.

Captain Francis Jackson is a lucky man with a new baby and leave. Polly is the new mother. Mrs. Jackson is the happy grandmother. Danny is a driver with General Hauling. Captain Harry Cartwright is another head case in his cousin’s care.

Little, Middle, and Upper Dysoe
Barbara Neville is the lady of Windward manor with her family dead and acts every inch of that. Major Arthur Findley, a solicitor before the war, is a wounded man who’s not right in the head whom Barbara insists on caring for in her home — and insists he’s her fiancé. Mrs. Neville is her stepmother and her deceased husband left Barbara in her care. Violet is a helpful housemaid. Tulley and Jim work the pub she owns. Maddie is the local medico — part vet, part healer — with plenty of secrets. Warren owns the flour mill; Matt is one of his sons. Mr. Oakham owns a pub and rents Molly, a tall sweet horse, by the hour.

Mrs. Chatham is a war widow; Phyllis Percy is her younger sister. Mary is one of the maids.

At the front
Sergeant Lassiter is an Australian Bess has treated on occasion. He seems to know everyone and get everywhere. He’ll do anything to help Bess out. Corporal Minton was the flailing patient. Sister Norton is one of her fellow nursing sisters. Dr. Browning tapes up her wrist.

The Cover
The cover is an idyllic scene of the Iron Bridge in Ironbridge on a late summer’s day with a gray-hatted Bess in a gray suit, her back to us as she ponders the river. An unexpected wheeled border lines the left side.

The title is what Bess is forced into being, An Unwilling Accomplice.

2 responses to “Book Review: An Unwilling Accomplice by Charles Todd”