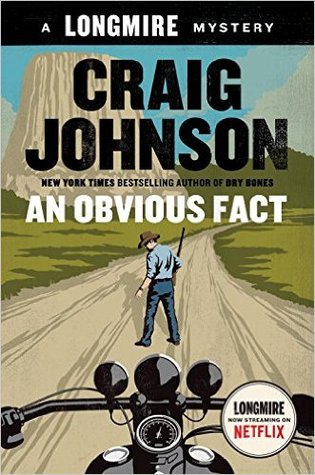 Also by this author: Spirit of Steamboat, A Serpent's Tooth, Any Other Name, The Highwayman, "Eleven/Twenty-Nine", The Western Star, Depth of Winter, Land of Wolves, The Cold Dish, Death Without Company , Kindness Goes Unpunished , Another Man's Moccasins, "Land of the Blind", The Percentages"

Twelfth in the Walt Longmire crime mystery series and revolving around a folksy sheriff in Wyoming with this story set in Hulett. It’s been three months since Dry Bones, 11.

I always enjoy reading about Walt and Henry — Henry is a big reason I adore the Walt Longmire series. He’s so serious in his concise, dry humor. Yeah, okay, I also like that he and Walt can take on anyone and win, lol.

I’m of two minds about Walt. I love how he cares for people and how supportive he is. And I do adore his sense of humor.

“They asked me who I was, and I told them that I was a sheriff too and that we needed to touch badges so we could recharge.”

But Walt does pull some really stupid stunts some times. In An Obvious Fact, it’s damn lucky he knows so many people, lol.

Some scary “fun” was that story Heiple tells about World War II. Scary. He was obviously supposed to stay alive. Eeek

It’s all those confusing bits and pieces that caused me to drop the rating to a “3”. I got to ruminating in the night and realized that An Object of Fact was simply too full of tell to rate that “4”. It’s Lola’s part in all this. She wasn’t convincing as the femme fatale nor as a mother. Considering what’s happened…I expect more of Johnson. I think we spend most of our time in Hulett. I don’t understand Lola’s role in all this. And that woman is really somethin’ else. Manipulative. Cold. And she sure rubs Henry the wrong way. And what I want to know is where did Walt get the idea about Lola and Post? Where did his conclusions at the very end about Lola come from? Admittedly, I actually can see that happening — can any mother be that cold?? What was with the Nance invite for the shooting contest? Were Walt and Henry heading over for the rally anyway and got called in for the accident? Why else would Henry have his bikes?

Yeah…Johnson dropped hints all over the place, but I was still lost.

Meanwhile Walt gets dragged in to the twenty-first century to the tunes of Lynyrd Skynyrd.

It’s a combination vacation and accident investigation when a young biker is run off the road during Sturgis week and ends up in critical condition. In one sense, it’s old-home week for Henry as he competes in the rally and comes up against an old flame of a femme fatale — the woman for whom Henry named his ’59 T-bird.

It’s the accident that is so much more than it seems as the ATF, a biker gang, and a donated military-grade vehicle come into play against a number of slick, bullying thugs who have their own agendas.

…where most of the action appears to take place. William “Nutter Butter” Butter is the chief of police. Corbin “Deputy Dog” Dougherty transferred from Gillette after a, um, incident. The Pequod is an MRAP, a Mine-Resistant Ambush Protected vehicle, and the police department’s latest acquisition.

Bob Nance is a local, sort of, who made his wad in ceramics in the auto industry. Mr. Frick is one of his bodyguards. Chloe is his wayward daughter. George “Gogo” Lance was staying in the same hotel. Connie Evans, Patricia Frontain, Annemarie Parker, Raye Lankford, Kelly McBride, and Dr. Carlton (with whom Walt has a connection) are all first-class shooters in the contest. The Bucket of Blood Saloon is popular.

Sturgis, South Dakota is…
…where the Sturgis Motorcycle Rally takes place, and where once a year, almost a million bikers show up. Jamey Gilkey has a motorcycle shop in Sturgis.

The Black Hills Classic was…
…started back in 1938 when Clarence “Pappy” Hoel founded the Jackpine Gypsies Motorcycle Club. KOTA Territory News is a TV station.

The Tre Tre Nomads are…
…a motorcycle gang from Arizona. Bodaway “B-way” Torres is twenty-two. The Lola is Loa Wojciechowski, a former “hot-n-heavy” girlfriend of Henry’s from 30 years back, and B-way’s mother. Delshay Torres, a Yavapi Apache, owns a custom bike shop, Crossbones Custom, in Maryvale, Arizona, and is B-way’s dad and Lola’s ex. Brady Post is the “spokesman”, a.k.a., Enforcer, for the gang. Big Easyis the bodyguard assigned to B-way.

Eddy the Viking, a.k.a., Crazy Eddy and a drunken idiot, is one of the original Jackpine Gypsies. He used to work for Kiddo. Phil Vesco is his thievin’ buddy.

Rapid City
Irl Engelhardt is the sheriff. Herb Robinson owns a wrecker service. The Chop Shop is a custom motorcycle garage owned by the out-of-control Billy ThE Kiddo, who used to have his own TV show. Earl Heiple, a retired world history professor, is one of Billy’s neighbors and hates the ground he walks on. Evelyn is the wife who died 17 years ago. Piseano’s Pacchia makes great pizza. Tiffany is a waitress there.

Cady is Walt’s daughter and working for the state attorney general’s office in Cheyenne. Lola is her eight-month-old baby daughter. Her husband, Mike, was murdered (he was also Vic’s baby brother; Dry Bones). Lena “Nonnie” Moretti is Vic and Michael’s mother; she’s in Cheyenne helping Cady with Lola. Alexia Mendez will be doing Lola’s daycare. Joe Meyer is the Wyoming attorney general and a friend of Walt’s; Mary is his wife.

DCI’s Accident Investigation
Mike Novo is their motorcycle expert. T.J. Sherwin is the head of the lab unit. And she’s got some rep!

Operation Bad God is…
…an ATF undercover operation. One of their operatives has been undercover for the past 13 years. John Stainbrook, a.k.a., Ray Swift, is in charge. Apelu is a confidential informant for the ATF. An RAC is a Resident Agent-in-Charge; an ASAC is an Assistant Special Agent-in-Charge.

The Agent-in-Charge in Denver is Mike McGroder.

Cattle Kate’s was a titty-bar back in the day. Brandon White Buffalo had been a bouncer there. Kate and Gowder are the Philadelphia detectives in charge of Mike’s murder case. Bidarte is their suspect. Bill Tichenor had been a polymer technician in Silicon Valley.

The cover has its woodcut design with the front end of a motorcycle aimed right at Walt in this bucolic graphic with its bright blue sky and green, green grasses bordering the light brown dirt road as it leans past Devils Tower on the distant left. Well, I’m guessing it’s Walt in that light blue denim shirt with the sleeves rolled up and blue jeans, wearing a brown Stetson, and carrying a rifle as he checks out the road where B-way was shoved. A black band at the top showcases the white font for the series information. The author’s name is beneath that in black with the title beneath that in white. A round badge at the bottom notes that Longmire is streaming on Netflix.

The title is a nod to the Cheyenne Mountain’s interest in Sherlock Holmes, for Henry is most interested in An Obvious Fact.

2 responses to “Book Review: An Obvious Fact by Craig Johnson”