All Wound Up by Jaci Burton
Genres: Contemporary Romance
Published by Berkley on August 4, 2015
Pages: 336
Format: Paperback
Source: the library

Tucker Cassidy's dating life is suffering, especially after that painful altercation involving his ex-girlfriend’s knee. Tucker is convinced it couldn’t get worse…until a gorgeous doctor comes to the rescue at his most embarrassing moment.

As the daughter of the owner of the St. Louis Rivers, Dr. Aubry Ross has been around jocks all her life. She knows the ins and outs of all their games, and she isn’t interested in playing.

When Tucker repeatedly lands in the hospital where she’s working, Aubry starts to think he’s getting injured just to see her. Tucker is both funny and sexy, and Aubry is pleasantly surprised to discover he actually respects her job.

When her father disapproves of their relationship, Aubry knows she’d rather lose Tucker than have him lose his job. But Tucker isn’t about to let threats of a trade get in the way of a game-changing love…

Also by this author: Melting the Ice, "Hot Holiday Nights", Unexpected Rush, Hot to the Touch

Tenth in the Play-by-Play romance series and revolving around sports teams in St. Louis, Missouri. The couple focus is on Dr. Aubry Ross and Tucker Cassidy, a hot (in every way) pitcher.

I had a hard time with this one. No, you perv, not that kind of hard time! It took awhile to get into the story: it seemed plasticky and stiff. Stop that! It was also full of tropes, although Burton did get in some nice twists.

I DO like that Burton portrays the women as career people. Smart with a sense of humor and a sense of honor. It’s such a treat. Even better is that Burton has the women all getting on with each other as teasing, supportive friends. Oh, yeah, the guys too *grin*.

Burton’s slick too in how she keeps adding on to the series, as she introduces new characters in the background who will move into a more prominent role somewhere down the line. She also keeps the old characters popping up. Not all of them, but enough to keep me informed about how past “friends” are doing *more grinning*.

In All Wound Up, Aubry is following her heart’s desire of becoming an ER doctor, and her parents are supporting that choice. Yet it is a choice that Burton uses to present a conflicted clash between Aubry and her dad, who is also the owner of the Rivers.

“…I haven’t yet reached the God complex phase of my medical career yet.”

I suspect that part of my problem with this is that it’s too fast and too easy. Sure, Aubry is kinda desperate for some fun, even if she does have to be talked into it while Tucker is too quick to become interested in Aubry. There’s no real “work” in this romance. It doesn’t actually get exciting until almost the end when Tucker is trying to work out the threat to his career. Their getting involved in the cooking was too easy too. I’d’ve liked to see at least one burnt meal!

Tucker’s ideas of dates was great. Different and fun. I particularly enjoyed the cooking lesson. Practical, educational, and so tasty. It does make their dating an easier slide into intimacy with a real relationship as opposed to one based only on sex.

And there is a lot of sex in this. A couple spots even got me warm *eyebrow waggle*…*and a grin*…

Oh, brother. That Laura. What a loser! She’s dating him for two months and that makes it long enough to move in??

There are a number of missed opportunities to make this more interesting. Some great conflict could have been introduced with the few mentions Aubry makes about men being disgusting pigs. She certainly has the family history for the comments, but Burton goes nowhere with this. It’s all tell, and very little at that. That nasty bit of extortion at the end was an opportunity that slid right through too. Another good opportunity to churn up some tension, some drama, and it went down the drain. Then the make-up scene. Wooden and not even exciting enough to be a trope.

I get the part about sibling teasing. God knows my sisters and I and Mom do plenty of that, but Burton overdoes this to a point that I wanna smack someone. Nor does the trash talk amongst the team sound right. There’s a stiffness here as well. Will you stop that!?

I have enjoyed most of this series. Shocking because I don’t like sports. However. Burton wrote about the no-hitter in a way that got me excited. I felt as though I were there, a very nice bit of writing.

Oh, crack me up! I love those few paragraphs in which Marie wants Aubry to pass him off to her. Just for a quick spin, lol.

Tucker’s parents sound like a treat. What parents are supposed to be like! I loved it when Grant told Leo he’d done well, that Leo’s his kid…and the proud, happy grin it puts on Leo’s face. Sigh.

Some other nice lessons in here include Tucker’s comments to Aubry about how it’s that second person that always gets results. I’d sure like to know if Aubry tries it out! The bitchfest the residents have at the bar was a nice touch as it provides an important lesson that everyone is pretty much in the same boat. It doesn’t matter how brilliant, gorgeous, or talented you are, everyone has the same issues. The quick chat the boys have about knowing when you’re in love was sweet.

“You never have to let me go, Daddy. You just have to give me the freedom to let me grow.”

It takes a hot and talented pitcher to pull Aubry out of her dating slump…and a few trips to the ER for Tucker Cassidy.

Dr. Aubry Ross is working her residency in the ER at the local hospital. Clyde and Helen Ross are her loving parents; he’s the owner of the Rivers baseball team. Aubry loves her too-patient Aunt Farrah and despises her philandering Uncle Davis. She’s not too happy with Uncle Oliver either, not since he attacked her career choice. I’d throw his own life choices back in his face! Jade is a cousin who’s gotten engaged to Mark.

Tucker Cassidy is a baseball pitcher who signed on with the Rivers a year ago. His rambunctiously competitive and teasing brothers include his fraternal twin, Barrett, who plays football for the Tampa Bay Hawks; Flynn is the oldest and a quarterback in San Francisco with the Sabers; Mia is their little sister who is so not into sports; and, Grant, another football player, is engaged to Katrina, an internationally famous model. She comes with her own family, a sister and brother: Anya and Leo are still in high school with Leo getting confident enough to go out for sports with encouragement from the Cassidys. Their dad, Easton Cassidy, had been a legendary quarterback (Hall of Famer) with Green Bay for his whole career. Both parents adore their kids and aren’t afraid to show it.

The Rivers baseball team includes…
…Gavin Riley is the first baseman (married to Liz, another sports agent, in Changing the Game, 2, and they have a two-year-old daughter, Genevieve); Dedrick Coleman (he’s married to a lawyer, Shawnelle); Garrett Scott is engaged to Alicia Riley, a physical therapist with the team (see Thrown by a Curve, 5); Jack Sanchez is the catcher; Walter Segundo; Fielding; Trevor Field (is with Haven); Lopez is a pinch hitter; and, Tommy Mahoney is a relief pitcher. Manny Magee is the coach. Phil is the team doctor. Bobby Sloan is the pitching coach.

The hospital
Dr. Katie Murphy is Aubry’s best friend and a fellow resident in the ER. Marie is the desk clerk; Charlene is the intake coordinator. David is a brilliant resident, the golden god of the ER who is dating a stripper. Rick is another resident who’s dating Felicia, one of the nurses. Olivia is another nurse. Max is an intern. Dr. Kenneth Chen is the attending physician in charge, and he scares the pants off all the residents. Dr. Landing is another of the attendings.

Victoria Baldwin is the Cassidy brothers’ agent. Madame Sheila seems like the real deal. Brenda is her daughter and receptionist. Patricia is the cooking instructor.

The cover is a dark brown with peach tones. It’s Tucker, shirtless, wearing navy blue sweats just hanging off his hips, a baseball in one hand and a glove in the other with his body facing one way and his head looking back. All that muscle is lookin’ good, just don’t look too close where hips meet pants. There’s something too plastic about those lower muscles.

The title is how Tucker makes Aubry feel, All Wound Up. It’s also the situation they’re in, with that focus on their careers. 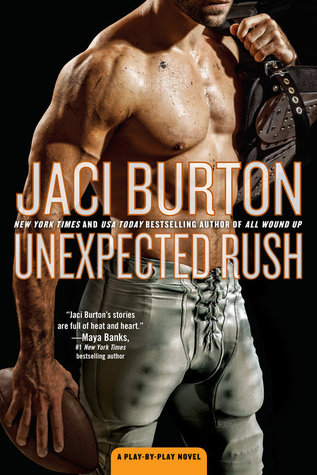 8 responses to “Book Review: All Wound Up by Jaci Burton”