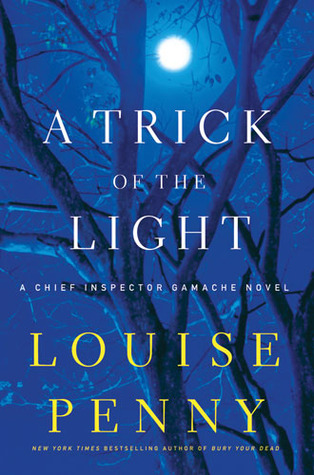 But now Lillian herself is dead. Found among the bleeding hearts and lilacs of Clara Morrow's garden in Three Pines, shattering the celebrations of Clara's solo show at the famed Musée in Montreal. Chief Inspector Gamache, the head of homicide at the Sûreté du Québec, is called to the tiny Quebec village and there he finds the art world gathered, and with it a world of shading and nuance, a world of shadow and light. Where nothing is as it seems. Behind every smile there lurks a sneer. Inside every sweet relationship there hides a broken heart. And even when facts are slowly exposed, it is no longer clear to Gamache and his team if what they've found is the truth, or simply a trick of the light.

Seventh in the Chief Inspector Armand Gamache cozy mystery series and revolving around the people of Three Pines village in Canada. It’s been six months since the shoot-out.

This is what it takes to be a great author. To be willing to sabotage a sweet character’s triumph, a woman who “paints dear life”. To create a character so vicious and evil! It makes me want to examine my own reviews of books…!

Events in A Trick of the Light are heavily influenced by an event that happened six months ago, for which no story was ever written but its fallout is first mentioned in Bury Your Dead, 6. It’s that disastrous shoot-out when so many policemen died, and Gamache and Beauvoir are near death. And it makes me wonder if the greater insecurity both Gamache and Beauvoir experience as a result, influence why they are missing some clues?

One point Penny has made in story after story is the basic philosophical difference between Gamache and Beauvoir: Gamache believes there is good at the bottom of everything while Beauvoir believes the reverse, that evil is hiding under the good. It will affect how he sees that video. And in at least one respect, it’s true but not how Beauvoir would imagine.

Then there are the murders: one is physical while the others are more metaphysical: the destruction of so many artists’ dreams and a marriage, as Peter is called on his true emotions and actions. A moment that had to happen.

I love what Penny writes of Annie Gamache, that Beauvoir sees her as someone who is alive. I also love how quickly Marois realizes what a prize Clara is. And this exhibition is just what Clara needs to find her backbone!

“…no good ever came from putting up walls. What people mistook for safety was in fact captivity. And few things thrived in captivity.”

Wow, I suspect we’ve all known, endured, and hopefully survived, a vampiric friend, one who sucks you dry. But the worst of it, the absolute worst is the one who should have supported her from the beginning, and instead betrayed her from the start. Even at the end, he can’t tell the full truth. I suspect I was lucky when I was in my artist phase, that my fellow artists were all so supportive. I never knew this world in which Clara and her fellow artists are struggling. It’s so cutthroat and greedy!

I do love what Brunel has to say about Clara’s and Lillian’s work, how joyful it is, and how she hopes it’s a sign.

At LAST! We finally discover how Olivier feels about the fallout from The Brutal Telling, 5. I was wondering if Penny would ever explore this. It would have been so easy for Gamache to shut that metaphorical drawer, and ya gotta love a cop who is more interested in truth and justice than in closing a case.

It’s a bit subtle, Penny’s noting the friend/not-friend relationships that exist. I find myself wondering if it’s an intentional build-up for that revealing ending, so it would make sense.

Oh, lol, I’ve wondered that one myself what with all the bodies that keep turning up in Three Pines — if the Sûreté should set up a permanent outpost in the railway station.

Why does Marois’ examination of Gamache freeze Beauvoir’s blood? It seems an extreme observation on his part. I did like the story Penny created from Marois’ early years as a dealer; it made his actions more human, more feeling. Then there’s Beauvoir’s duplicity at the opening…yes, it was wrong, but oh, so satisfying, lol. The nasty continues as Gamache delves into the truth behind the art world of exhibitions and representation.

It’s Clara’s encounter with the Dysons that proves the truth of what Suzanne says about following the steps faithfully, carefully. Taking the time to heal thyself along the way. It’s an inside look at Alcoholics Anonymous, and how it helps people turn away from drink, but there’s nothing in this that changes people completely. They may have to tell the truth about their drinking and what drove them to it, but they surely don’t apply that philosophy of honesty outside the meeting rooms.

In many respects this is a frustrating story. There is so much emotional angst lying beneath the public faces. Clara’s feelings of betrayal on the eve of what should be the most eventful time of her artistic life. Beauvoir’s sudden embracing of life versus his anger for what he sees as a betrayal. Peter’s sudden realization of his betrayals. Gamache’s worries about the truth behind that video hack and his own coping skills. Annie’s marriage.

It’s all up against Clara’s recognition as an artist, Olivier and Gabri, that final scene for Ruth, the beauty of Lillian’s work, and most especially the love Gamache has for his wife.

It’s what most of us hope to find, “a quiet place in the bright sunshine”.

It’s a terrified Clara who seriously wants to run home and hide rather than face the critics. It’s also the night that the desired revenge begins, at the vernissage, Clara’s opening for Montréal’s elite at the Musée d’Art Contemporain.

Clara Morrow is a forward-thinking artist, always exploring the possibilities, and one of the most forgiving women. It’s also meant that she’s been ignored for most of her life. Peter Morrow is her husband and celebrated for his intensely detailed close-ups of nature.

Chief Inspector Armand Gamache is the head of Homicide for the Sûreté du Québec; Reine-Marie is his beloved wife, a librarian. His children include Daniel who is married to Roslyn, and they live with their children, Florence and Zora, in Paris, and Annie who is married to David, but they’re having troubles. Henri is Gamache’s young German shepherd.

Gamache’s team includes:
Inspector Jean Guy Beauvoir is having his own crises: divorce from Enid, dismay at what he realizes about that shoot-out, and desire for the wrong woman. Agent Isabelle Lacoste will be handling more responsibility, which she deserves. Dr. Sharon Harris is the coroner.

Agent Yves Rousseau is with Cowansville. Superintendent Thérèse Brunel had been the chief curator at the Musée des Beaux Arts, a celebrated art historian, and an advocate. She made her career change when she realized how much she loved puzzles. Her husband, Jérôme, is a retired ER doctor who is amused at his wife’s sudden appreciation for puzzles. Chief Superintendent Sylvain Francoeur is Gamache’s enemy.

The Morrows’ friends from Three Pines
Olivier Brulé (who hasn’t yet forgiven Gamache for events in The Brutal Telling) and Gabri Dubeau are the gay couple who run the B&B and Bistro. Myrna Landers, a former psychologist, is the large black woman who runs the bookstore. Myrna does a lovely job of keeping Clara’s feet on the ground, lol. I loved what she said about the Ottawa Star versus the London Times, the New York Times, and Le Devoir! Ruth Zardo is the insightful bitch of a drunk who won the Governor General Award for her poetry; she’s also the village fire chief. Rosa is the duck who flew south. Monsieur Béliveau runs the general store. Dominique and Marc Gilbert run the newly renovated Inn and Spa and have a scraggly herd of horses: Buttercup, Chester, and Macaroni.

The art world
François Marois is an art dealer, a very successful one. André Castonguay is another famous art dealer who owns the Galerie Castonguay and buys art for the Kelley Food company. Vanessa Destin-Brown is the head of the Tate Modern. Denis Fortin runs the Galerie Fortin, the one who dissed Clara so badly in The Brutal Telling. Bishop is the curator from the Musée d’Art Contemporain.

Normand and Paulette are a mildly successful artistic couple who collaborate and couch their “congratulations” in spiteful digs. Billy Williams.

“The best artists reveal themselves in their works.”

Lillian Dyson was Clara’s best friend growing up, until she grew into her next stage of development. One that alienated all but her parents. She became an art critic at La Presse and left some twenty years ago for New York City to pursue a career as an artist. Madison is the jazz trumpeter she married and divorced.

Alcoholics Anonymous
Judge Thierry Pineault is the Chief Justice of the Québec Supreme Court, and Brian is his sponsor, a Nazi skinhead who got his wake-up call with Aimée. Suzanne Coates was Lillian’s sponsor and a former artist. Lorraine is a co-worker of Suzanne’s at Chez Nick.

Van Gogh’s ear “means scooping up everything for fear of missing something important”.

I’m assuming the cover is meant to reflect that night, that fateful night when Clara was celebrating her triumph with its deep, deep electric blue of night, a hazy full moon overhead shining through the branches of a bare tree [which makes no sense since the roses and lilacs are blooming].

The title is an artistic reference; it’s all a A Trick of the Light, a chiaroscuro of personalities.

4 responses to “Book Review: A Trick of the Light by Louise Penny”