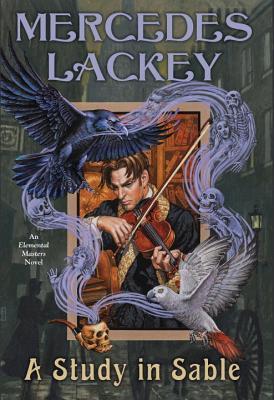 Buy on Amazon
Goodreads
Also in this series: Elementary: All-New Tales of the Elemental Masters, The Case of the Spellbound Child, The Serpent's Shadow

Twelfth in the Elemental Masters paranormal history series set in Victorian England (usually) and revolving around a loose group of magicians who command the Elements. The focus is on Sarah Lyon-White and Nan Killian, all grown up.

We’ve met Sarah and Nan before, and it’s before I started taking notes on the characters. I do know they had a mission in Home From the Sea, 8. I want to say they first appeared in The Wizard of London, 5, but I’m just guessin’.

I did enjoy meeting up with them again, although I did become disappointed. The adventures were enjoyable enough, even if it did feel as if Lackey were stringing events together to fill out the book, but it was Nan’s attitude about Sarah’s descent into idolatry that didn’t ring true and colored my assessment.

Another contributing factor to my disappointment was Lackey tossing Holmes and Watson into the mix, but without any real reason for doing so. Any detectives could have done as well for the characters. It may even have made for a better story if Lackey had put her mind to creating her own characters instead of inhibiting them with Holmes and Watson.

I don’t know if these later books aren’t selling as well or if Lackey is lacking imagination for new ideas. But adding Watson and Holmes into the mix felt odd. There are tidbits in here about Sherlock (and his brother with a dribble of Moriarty) interacting a bit with the girls, but that’s really as close as it comes.

It’s also weird that Watson and his wife are obsessing over paranormal cases and have almost no interaction with Holmes, who doesn’t believe in the paranormal. Yes, there is the odd consultation between them, but it feels contrived.

I suspect Sarah’s absorption in her opera singer was to have given the story more depth, but it only made Sarah and Nan look bad, albeit for different reasons.

And so it begins with a hint of the main conflict of the story tucked in with a host of small “adventures” in which the foursome, er, sixsome?, solve mysteries and handle hauntings. Some of these adventures bring in previous characters Nan and Sarah have encountered, so it is a chance to “catch up”.

It’s a skeptical Holmes the girls must convince, if they want to join in on his investigations.

A participation that will have to wait for one of the girls though. In particular, a contract between Sarah and the opera diva, Magdalena von Dietersdorf, who is beset with ghosts. It’s a lucrative job, but as Sarah is exposed to Magadalena’s lifestyle, the more she appears to abandon her values.

Nan Killian, a psychometrist who manifests on the astral as a Celtic warrior-woman, and Sarah Lyon-White, a medium, have been best friends forever; Neville, Nan’s raven, and Grey, Sarah’s parrot, are both Astral Guardians to Nan and Sarah. Suki is a young (psychic) orphan girl who lives with the girls and works as their servant and apprentice. Mrs. Horace is their landlady who also provides them with meals.

221 Baker Street
Dr. John (a Water Master) and Mary (an Air Master) Watson live anonymously in the flat above Holmes’ place. Sherlock Holmes is a private detective who uses Mister Meier and Rev. Tellworth as alter egos. Mycroft Holmes is his brother. Mrs. Hudson is the landlady.

The White Lodge is…
…a ruling magical body based in London with Lord Alderscroft, a.k.a., The Wizard of London, 5, as its leader. He is also a Member of the House of Lords, the unofficial Minister of Magic to the Crown, and a confidant of the Prime Minister.

The Harton School for Expatriate Children is…
…a school for the children of expatriates and psychically gifted children. Isabella Harton, a.k.a., Memsa’b, runs it along with Sahib, Mr. Frederick Harton. Karamjit, Selim (the strongest magically), and Agansing work at the school teaching self-defense in mental and physical combat.

The Irregulars are…
…led by Wiggins. Tommy Grimes, a street Arab, is his right-hand man. The Major pays well for information.

Beatrice Leek is an unconventional Earth Magician who keeps an eye on the artistic set. Alexandre is a vicious weasel with driblets of ability. Rhodri is a selkie (Home From the Sea, 8) who brings greetings from Sally Anne and better news about Gethen who is still the chief of Selch Seren y Gogledd. Lyr is one of the Sea Lords. Freddie Smart is the cabbie the girls retain; Crumpet is his gelding with the instincts of a polo pony. Mr. Doyle is the writer of Watson’s and Sherlock’s adventures.

Master Nigel Hopkins left very complicated instructions. Mrs. Agatha Hopkins and her son, Neddy, end up quite pleased to see our investigative group. Franklin works for a solicitor. Trevor Howard is a bank manager, and Alan is his son and an assistant manager.

The Boisier of 1713 is a Stradivarius owned by Maestro Pablo Sarasate, a Spanish violinist who is a Spirit Master.

Magdelena von Dietersdorf is an opera star from Berlin staying at the Langham Hotel. Alicia is her maid. Johanna is her missing sister. Herr von Dietersdorf is their worried father. Helmut Reicholt is the undisappointed fiancé. George William Thomas Brudenell-Bruce, the fourth Marquess of Ailesbury, a.k.a., Willie, is but one of Magdalena’s admirers and has a home, Tottenham House, in Wiltshire. Annie will be the maid assigned to Sarah. Willie’s stablemaster is an Earth Magician.

Sevenoaks, Kent, is…
…where Cedric and Agatha Edmondson live on Sennoke Farm.

Fomorians are…
…from Celtic legend and said to be the first people, extremely powerful magicians and monsters who were conquered by the Tuatha De Danaan. Balor was their leader.

Ladies’ Rational Dress is a style of dress that allows women freedom of movement. The Exeter Club is a men’s club and houses the Hunting Lodge of London with its own archive room loaded with eight generations’ worth of tomes on Elemental Magic. Puck’s Blessing is the ability to see elementals, and those who possess the gift are usually recognized by those same elementals. Sons of Adam are humans. Lucid dreaming is dreaming to order…man, would I like to be able to do that…all those gorgeous male celebrities…*grin* Psychometry is the ability to read the history of an object by handling it.

The cover is dark in its deep green close-up of a cityscape with an inset image of Pablo in quilted navy dressing gown, playing his violin in a library. The graphic is bordered in plain old gold and overlaid with a purple swirling stream of skulls, skeletons, and heads emanating from a skull-shaped meerschaum pipe in the lower left corner. Grey and Neville are positioned in the upper left and lower right corners, battling the stream. The author’s name is at the top in a metallic embossed font while the title is smaller and at the bottom in an embossed old cream.

The title, a A Study in Sable, plays off one of Sir Arthur Conan Doyle’s novels, A Study in Scarlet.