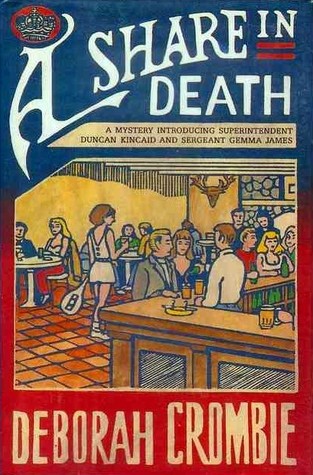 
First in the Duncan Kincaid & Gemma James cozy English mystery series and revolving around a couple of cops from Scotland Yard. This story takes place at a holiday mansion in Yorkshire.

In 1993, A Share in Death was nominated for the Agatha Award for Best First Novel.

It’s Agatha Christie-lite in A Share in Death with its “captive” houseguests stalked by a murderer. It’s certainly a soft read and lets us in on everyone’s thoughts with its third-person omniscient point-of-view and a dab of the unreliable narrator with that Chekhov’s gun plot device along with bits of foreshadowing. A few other devices include the Had-I-Known and Cassie’s peripeteia.

There’s all the mortal failings of greed, ambitions, and fear meshing in with honesty and Kincaid’s inability to stand back — Duncan’s investigative style appears to be the stir-the-pot kind. Of course, it could be that it’s not officially his case, and he’s just poking about. And poking about in romance as well.

The major conflict, of course, are the murders and how they tie together, and Crombie keeps the interest flowing with each guest’s own issues.

I do have one problem with one set of interactions. Patrick’s response to the bombshell that bursts for him is real, and so is the response to that response. But that conflict is resolved so quickly. No grudges, which is consistent throughout the story, as everything settles with so little drama.

I loved how Crombie slipped me right into Duncan Kincaid’s and Gemma James’ lives. It doesn’t feel like this is their first time up, and Crombie inserts minor character conflicts to keep them interesting. Character conflict-wise, it’s character vs character as well as vs self.

There’s the trope of the local coppers angry that Scotland Yard is interfering, but it feels half-hearted. That’s not to say that Nash isn’t a complete jerkwad, for he is — how he ever got to his current rank, I’ll never know, as incompetent as he is, but it’s only the one character and the rest collude with Kincaid.

And there’s a touch of the metaphysical in here which makes me wonder what the future holds.

A week’s holiday in a luxurious Yorkshire time-share is just what Scotland Yard’s newly promoted Superintendent Duncan Kincaid needs. But the discovery of a body floating in the whirlpool ends Kincaid’s vacation before it’s begun.

One of his new acquaintances at Followdale House is dead; another must be a killer. Despite a distinct lack of cooperation from the local constabulary, Kincaid’s interest in crime (and Nash’s incompetence) won’t allow him to ignore the heinous crime, impelling him to put his enthusiastic young assistant, Sergeant Gemma James, to work.

Then a second murder occurs, and they find themselves in a determined hunt for a fiendish felon who enjoys homicide a bit too much.

Duncan Kincaid is one of Scotland Yard’s bright young men and has been promoted to detective superintendent. Victoria is his ex-wife. Jack is his cousin who couldn’t get away for his own holiday. Gemma James is his confidence-inspiring sergeant, divorced from Rob, with a two-year-old son, Toby. Chief Superintendent Denis Childs is Kincaid’s boss.

Followdale House is…
…a Georgian house converted into a series of timeshare apartments in Yorkshire. The vampish Cassie Whitlake, the sales manager for Followdale, plays queen of the manor. Sebastian Wade is her snarky assistant manager. His mum keeps the tobacconist’s shop in the village.

Guests include Penelope “Penny” (her memory is failing) and Emma (loves birdwatching) MacKenzie who are sisters from Dedham Vale who recently lost their father, Rev. MacKenzie. Hannah Alcock is a biogeneticist heading up a research clinic on rare viral diseases, the Julia Sterrett Clinic in Oxford; Patrick Rennie (he’s a rising M.P.) and his wife, the gin-soaked Marta, have the Thirsk Suite; Eddie Lyle (he’s ex-Army who conquered the IRA singlehandedly and is now in civil engineering) and his put-upon wife, Janet, have a daughter, Chloe, in boarding school; Maureen and John Hunsinger are into organics and have two children: Bethany and Brian; and, Graham Frazer is in assurance and is here with his daughter, Angela; he’s battling for custody with his ex-wife, Marjorie.

The Mid-Yorkshire CID
Detective Chief Constable Bill Nash is a nightmare. Detective Inspector Peter Raskin is much more reasonable; he’s married with two kids, a boy and a girl. Police Constable Rob Trumble is the first on scene. Kincaid is attracted to Dr. Anne Percy, a small town G.P. with an obstetrician husband, Tim, and two kids — Molly and Caroline.

Miles Sterrett founded the Julia Sterrett Clinic when his young wife died of Cruetz-Jakob disease. Mrs. Milton is Miles’ housekeeper. Mary owns a tea shop in Dedham Vale while George is a neighbor. Cassie’s father is a construction foreman in Clapham. Evie is the sister who’s still at home and refers to her sister as “Lady Muck”. Louise and Major John Rennie are Patrick’s adoptive parents. Helen North is Janet’s neighbor and has a young son, Malcolm. Trevor is a young boy at Aysgarth Falls with his parents.

The cover has the feel of a medieval woodcut with its vintage colors of aged cream, browns, and reds, but is quite modern in its subject with a crowded bar filled with people having fun. The title soars across the top of the cover in white against a deep Wedgewood blue with a burgundy oval surrounding a gold crown in the A and the same burgundy in two short slashes under the in. A band the color of an old newspaper carries the series information in a serif font. The bottom of the cover is the same burgundy with the vintage brown for the author’s name and a narrow border around the graphic.

The title is a play on the set-up, the timeshare with everyone getting A Share in Death.

4 responses to “Book Review: A Share in Death by Deborah Crombie”