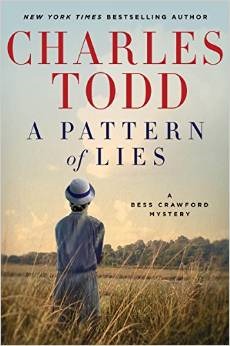 A horrific explosion at a gunpowder mill sends Bess Crawford to war-torn France to keep a deadly pattern of lies from leading to more deaths, in this compelling and atmospheric mystery from the New York Times bestselling author of A Question of Honor and An Unwilling Accomplice

An explosion and fire at the Ashton Gunpowder Mill in Kent has killed over a hundred men. It’s called an appalling tragedy—until suspicion and rumor raise the specter of murder. While visiting the Ashton family, Bess Crawford finds herself caught up in a venomous show of hostility that doesn’t stop with Philip Ashton’s arrest. Indeed, someone is out for blood, and the household is all but under siege.

The only known witness to the tragedy is now at the Front in France. Bess is asked to find him. When she does, he refuses to tell her anything that will help the Ashtons. Realizing that he believes the tissue of lies that has nearly destroyed a family, Bess must convince him to tell her what really happened that terrible Sunday morning. But now someone else is also searching for this man.

To end the vicious persecution of the Ashtons, Bess must risk her own life to protect her reluctant witness from a clever killer intent on preventing either of them from ever reaching England.

Seventh in the Bess Crawford historical mystery series set during World War I with this story in the autumn of 1918 near the end of the war and revolving around Sister Crawford. The action takes place between the frontlines in France and around Canterbury in Kent.

Todd had my heart rate going on this one. I could not see how they would ever be able to figure out what was going on. And what is with that police station?? Were they that unsupervised at the time? Were they that autonomous?? Surely the Colonel Sahib had a bigger network he could have tapped to push someone of a higher rank in the police into taking a peek? At least he did have Simon to send off on those errands. Why would a powder mill foreman have matches at work? Why wasn’t Bess trying to find out more about Collier? He had been one of the principals at the time, and she’s certainly spent a lot of effort to find others involved.

Then again, people were much more insular at that time, ignorant of people’s rights, and it was too easy to toss justice aside. Throw in loved ones who were grieving or dead, and it’s a recipe for disaster. That insularity certainly didn’t help when it came to that bloody family lawyer. What were they thinking keeping him on for that long?

What really ticked me off, though, was what it all came down to in the end. That was the best Todd could do? All that for just that?? It does take all kinds, but…oh, boy…that ending simply didn’t ring true for me. The guy must have been bloody stupid, in which case, how did he ever get assigned that job?

While the ending was annoying, I do generally adore Todd’s stories. Not only does Todd provide a more direct look at war from a field hospital’s perspective, but Todd is so true to the time period. The clothing, the manners, the expected mores, the style of life for both classes. It pulls me into the period. Then there’s Bess, Simon, and the Colonel. I do adore them. They want the best for everyone and will do whatever it takes. They’re honorable people…and surprisingly forward in their thinking in “allowing” Bess to pursue her interests. Considering how women were treated at the time, it’s quite progressive.

I’m with Philip Ashton in some respects. People must know something of the man, of his care for the people who work for him, the mill’s past record, and they should all have weighed in on his side. Especially his friends!?! I could wish Todd would write a follow-up some time in an upcoming story to reveal what happens later on.

It’s all so insidious. Hateful. What’s worse is everyone around the Ashtons is lying.

It’s the cops’ behavior, their attitudes, that explain why people don’t trust them. It’s that attitude that makes me adore cops like Eve Dallas and Lucas Davenport.

There’s an interesting paragraph in which Bess thinks of all the innovations that have come to the battlefield with this war. It was a War to End All Wars in so many ways technologically, socially, economically, psychologically, and mortally.

Oh, lord, Lassiter gets in trouble with his commanding officer, and it sounds so like him, lol! I do love his character.

“He told his commanding officer that three men just reduced in rank for insubordination were actually trying to keep Captain Maxwell from looking like a fool. And he added that it had been all but an impossible task from the start.”

It’s weird how Britton keeps changing rank from private to corporal and back again.

And the Allies are thrilled that the Americans have come to help.

A two-year-old tragedy is still stirring emotions in Cranbourne, the home of the former Ashton Gunpowder Mill. The explosion and fire were ruled an accident until suspicion and rumor begins to swirl around the village.

It’s pure chance that finds Bess Crawford visiting the Ashton family and experiencing the venomous show of hostility that is aimed at anyone associated with the Ashtons.

The persecution vented upon the Ashtons raises Bess’ ire, and she’ll risk her own life to find the truth.

Sister Bess Crawford is a nurse with Queen Alexandra’s Imperial Military Nursing Service who works at various field hospitals on the frontlines in France. Her father, Colonel “Sahib” Crawford, may be retired, but he’s hip-deep in the background along with his former batman, Sergeant-Major Simon Brandon. Her mother works tirelessly on the homefront with her charities and being a comfort to the wives and families left behind. Melinda Crawford is a cousin who lives in Kent.

Mrs. Hennessey is Bess’ London landlady. Mary and Diana are her flatmates.

Captain, or rather, Major Mark Ashton was once one of Sister Crawford’s wounded. Eloise had been the major’s fiancée. Mrs. Helen Ashton is his very brave and determined mother. Mr. Philip Ashton is the very reserved father. Nan is Mr. Ashton’s liver-and-white spaniel. Clara is the cousin in love with Mark. Their family home, an old abbey guesthouse, is in Cranbourne near the family’s powder mill that blew up, killing over a hundred. Mrs. Byers is the housekeeper. Baxter seems to be a groundskeeper? Mrs. Lacey is the cook. Betty Perkins was one of the maids they had to let go.

Mr. Groves is the ineffective family solicitor. Lucius Worley is a barrister. Florence Benning is the new witness who suddenly came forward after two years; her sister is George Tate‘s widow. Doctor Scott tried hard to treat Mr. Ashton but the police wouldn’t allow it. Theodore Heatherton-Scott and his valet, Henry, arrive. He had a son, Lieutenant Scott, who had served under Colonel Crawford in India.

Lieutenant Wilmont, Captain Hunt, and Sergeant “Granddad” Edgar have all written the major with news of his unit.

Cranbourne
Constable Hood could care less what happens to the Ashtons. Captain Collier had been the government’s man overseeing work at the mill. Alex Craig had been a boatbuilder before the war and a pilot during the war until he was wounded and invalided out. Seems he was also interested in Eloise. Sergeant Rollins was a fisherman at the time; now he’s a highly valued tank commander. Agatha Rollins is his despised sister with whom he has to share the family cottage. Mrs. Branch claims Nan killed three of her chickens. On the afternoon Bess had Nan on a leash while she was visiting Betty and Agatha. The ineffective Mr. Gardener is the vicar at the Church of St. Anne.

Canterbury Police Station
Inspector Brothers lost some people in the explosion and isn’t interested in justice. Mr. Parry is a vicar and witness whom Brothers is doubting along with others.

At the front
Sergeant Lassiter is a very resourceful Australian who’s taken a liking to Bess and can accomplish anything. Captain Maxwell is a young, green commander. Corporal Eustace never did send the papers in on the incident.

The wounded include Lieutenant Harriman, Sergeant Overton is a tankman, Corporal Haines survived while his crew didn’t, and Private/Corporal Charley Britton was in for trench foot and went sleepwalking. Lieutenant Henley visited Britton in hospital. Captain Thomas is running a fever while Captain Taylor died.

Bess is toing and froing to England and back and always posted somewhere new. The people she works with include Sisters Herries, Hancock, Morris whom someone tries to suffocate, Anderson, and Cameron while the doctors mentioned are Lytton and Browning.

The cover is a golden afternoon in a wide open field, a line of trees running diagonally at the back. It’s Bess in a pale gray cloche with an almost black ribband atop her done-up hair and a bloused deeper, gray dress with the smocking at collar and shoulders gathering the fabric in thin vertical gathers. It’s a thoughtful pose, as Bess looks out over the fields, her arms crossed in front of her.

The title is what this story is all about, A Pattern of Lies that everyone is too quick to believe.

The Snake, the Crocodile, and the Dog by Elizabeth Peters

One response to “Book Review: A Pattern of Lies by Charles Todd”